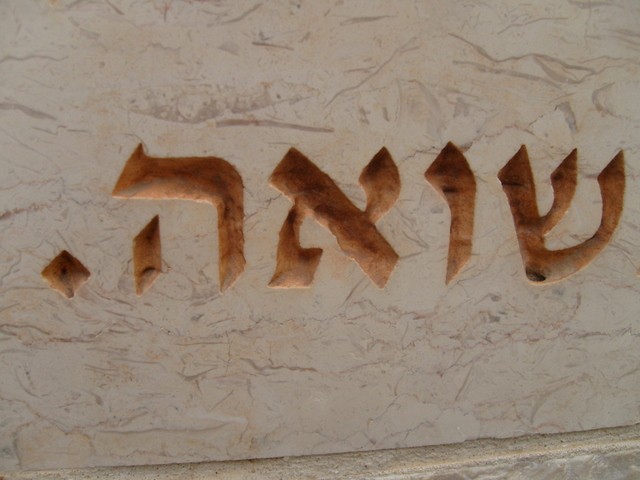 A Search for Truth On the other side of the crumbling wall, despair and hope wear the same face…

For a long time, the Holocaust did not quite seem real to me. I had no doubts that it had happened; there were photographs and survivor’s stories and novels and monuments and museums… But I had nothing imprinted in my own memory to tell me that a place called Auschwitz existed. What is a memory? It is not just images. There are sounds and smells and feelings. I had none of these.

Every time I thought of Poland, I thought only of the black-and-white photographs of desolation and despair, the gaunt faces. For a long time I thought that was what Poland was, and that I would get off the plane and set my feet down into gray dust, a gray sky above me.

It was raining when we got off the plane. Poland in midsummer was disturbingly beautiful, especially to a whole group of Jewish teenagers who were expecting to step into a 1940s photograph. The trees exploded with green, the grass seemed to invade the boundaries of the concrete. Even the storm clouds above us harbored a dark sort of beauty. Okay, we thought, this is Poland at the airport. But it isn’t like this where we’re going.

The next day we had been driving along a similarly beautiful road when suddenly we pulled into the parking lot of what appeared to be a park with some old buildings. This, we learned, was Auschwitz. We were confused: when you think of Auschwitz, you probably think of the rectangular building with a second-story tower and a gate in the middle with train tracks running through it, like you’ve seen in the movies. No. We were there, at the original camp called Auschwitz. What are you supposed to say to that? We said nothing. But as we toured a camp that could well have been a group of apartments, the holocaust started seeming even less real. We were given head sets. The buildings were devoid of beds or any other clues as to their former purpose, instead serving as ghastly museums. We saw the hair and the shoes and the cans of cyclone-b and whatever else, but it was all safely behind glass. This can’t be Auschwitz. I still remember that blasphemous thought ten months later. This can’t be where it happened. This is another damn museum.

Even the gas chamber had a little pot of flowers in the center.

The trip to Poland was no longer just a mission to convert each of us into witnesses. For me the trip became a search for what the holocaust was, for proof of what really happened. A search for truth. As I walked, dry-eyed, out of Auschwitz, I told myself that when I finally found that truth, I would know in an instant. What is the holocaust? The question beat across my brain for the rest of that day. At Birkenau, overgrown with the greenest grass I’ve ever seen, my eyes remained dry. I could finally fill the colors into that picture that garners every textbook in the holocaust section, of the rectangular building with a second-story tower and a gate in the middle with train tracks running through it, like in all the movies. We walked for what seemed like forever between two tall fences, and we felt firsthand the immense scale of what Hitler wanted to do. We passed the ruins of a gas chamber, where someone had deposited a yellow silk flower. We sat down in the grass near four black headstones. Still nothing. I was mad at myself for not crying. The one place in the world where tears should have come freely, they didn’t.

I found a four-leaf clover in the grass.

Before we left Birkenau, I realized why I hadn’t cried yet. A giant monument had been erected, probably on crematorium ruins, its main focal point a complicated stone sculpture that had no immediately recognizable shape. There were no tours, no museums, but something was still here that did not belong. As we left Birkenau I began to wonder if it was really us who did not belong. So many people died here; what right did we have to come and go as we please? Were we the ones preventing ourselves from finding that truth?

For ever let this place be a cry of despair and a warning to humanity, where the Nazis murdered about one and a half million men, women, and children, mainly Jews, from various parts of Europe.

The next day we drove to Lublin. We were beginning to come to terms with the beauty of Poland, replacing those black-and-white photographs with vivid memories. If only, I thought to myself, the Holocaust hadn’t happened. Poland would be an excellent place to vacation. But then I reminded myself: whether or not it happened makes no difference. People still go on vacations to Poland, Jews and non-Jews alike, and not all to see the remnants of its cruel past.

We drove out of Lublin, or so we thought. We passed a field surrounded by an aged wooden fence and barbed wire. There were brown, abandoned buildings inside, and dirt paths, and wooden watch towers. I looked around, and into the distance: we were surrounded by Lublin on all sides. There was a concentration camp in the middle of the city.

We stopped and got out, shoes crunching on gravel composed of smooth stones. The sun had picked today of all days to shine. This was the last camp we were to visit: Majdanek. I’d heard stories. Majdanek is the worst, they said, if you haven’t cried yet you’re gonna cry there. Honestly, looking at the wooden buildings, I was expecting another Auschwitz. As we entered buildings that had once been storage facilities, my heart sank. More displays, more signs, more enlarged pictures. I was worried now, the truth was going to slip away again…

That’s when the smell of old leather caught my nose from the final building. Stomachs lurching, we walked in.

Shoes. Thousands of them. But it wasn’t the same as it had been at Auschwitz, where they were safely behind glass… these shoes were in wire cages. If you wanted to, you could reach your fingers through and touch them. The smell was suffocating. Each one of those shoes was crying silently, screaming into nothingness… The guides told us stories. Somehow these stories seemed more real to me now that I could imagine them happening before my very eyes. I could see the undisturbed gate where the SS officer drove in on his motorcycle every morning, ready to drag another prisoner through the dust behind him until nothing remained. Suddenly it seemed as if the museum glass was melting, the photographs filling with color…

The barracks still had beds. The gas chamber still had claw marks and blue stains on the inside, the ovens still had ashes in them. Nothing, nothing was disturbed. We learned that the chambers were so well-preserved that in a mere forty-eight hours they could be up and running again.

Away from the camp, on an unused hill, was a tall stone monument. We walked up, expecting a single plaque inside. I will never forget the stomach-churning contents of that monument, no glass to separate it from you:

A mountain of human ash.

That was it. That was the moment when the holocaust became truth. I fell to my knees and cried; cried harder than I had in a very long time. I could feel it in my heart, in all my bones, in every fiber of my being. The truth echoed inside me, filling every inch of me.

Yom HaShoah is a time of mourning, of despair, of promises and of hope. Each day “never again” tolls louder as louder as each day the number of true witnesses dwindles. Visiting Poland is not the only thing you can do to ensure that the memory of the holocaust endures, though it is among the most effective and powerful. Pass it on. Educate others. Do a mitzvah; donate to a holocaust museum. Better yet, donate to a cause that fights genocide in other areas of the world. Even a little goes a long way. It is our duty to make sure that the holocaust remains truth, that “never again” really means never again. And when the time comes that there is no one left to have their say, it is our responsibility to stand up and deliver our testimony.

I know I will.