A Eulogy for Randy Schwartz z”l

“Who is wealthy?” Asks Rabbi Ben Zoma in the 4th chapter of Pirkei Avot. “The one who is happy with their portion, with their lot”. “Aizeh hu ashir? Hasameach b’chelko.”  From what I knew and from everything I’ve heard from his family, this could have described Randy Schwartz whose memory we are honoring today after his sad and unexpected loss last week.  Even though he did not have much materially, Randy was always smiling, laughing, never complaining and happy with his lot.  He would drop everything to help out a family member, or friend, or anyone really and always did it with a joyful heart and no expectation of reward.  Whenever he did have money, he would spend it – on the best uncle type present or man toys for himself.  Though not a wealthy man, Randy was rich, as Ben Zoma understood it. 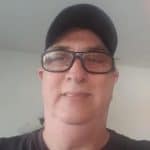 Randy Jay Schwartz was born on March 4th 1957 in Los Angeles to George and Doris Schwartz, who were often both working and Randy was raised in no small part by his wonderful older sister by 7 years, Karyn, who always took care of him. He was epileptic as a child with Grand Mal seizures until he was 16 – Karyn learned how to respond and it was always the big sister who took care of him; she either took him along to whatever she was doing, which got her into trouble with her parents occasionally, or stayed at home to take care of him. Randy was not a traditional learner and he was often taken away from friends for special education in a college. He got his GRE, but quit education before the end of high school.  Rich has been in Randy’s life for so long and when he and Karyn got together, they looked after him together; Rich taught him to read using sports pages. Rich said that sometimes it was like having a third kid, which makes the loss so much harder because they were sure he was going to outlive Rich and Karyn.

Randy was handy and practical and loved to fix things. He had lots of blue collar jobs, working in the Boulder dairy before it became an arts center, at a meat plant and the tofu factory on Arapahoe, covering all three parts of Jewish diets – meat, milk and parev!  Randy loved and was proud of his maintenance work in the JCC, both in the old building and in the early years of the new one; the JCC felt like an extension of his family.  I remember when he was setting up the chairs there for our High Holiday services – it felt like he was doing an act of service with great pride and also being a stickler for all the codes; when we asked if the chairs could be a little closer, there was a firm “no”, but with that chuckle of his. Later on he worked for a few months at our facility at Bonai Shalom and it was always good to see his smiling face there and the pride he took in fixing things – he became part of our family. Randy was also the maintenance guy for his nephew Devon in the fraternity house. He loved that too.

He was good and thorough at repairs, but all in his own time. RST as Kelly called it – Randy Standard Time. Usually with a can of Mountain Dew in his hand, he moved slowly, taking it all in like there were no worries. Rich said “because of that we thought he would live forever.”

Devon and Carly and their families adored their Uncle Randy who was so present and so much part of the family that all their friends only knew him as Uncle Randy. He taught Devon to fish, would always buy the kids the coolest, most extravagant toy or art set, even though he couldn’t really afford to, and would enjoy assembling, playing, being with his great nieces and nephews on the floor as he was a big kid himself in some ways and he was the best tickler. You can ask Kelly about what happened with the gift of the baby doll that wet herself!

He was always there to help, dropping everything else and showing up and always in his own way!  Carly shared that he never liked being told what to do and was very independent and stubborn. “He wanted to please everybody, but he went to the beat of his own drum.” His family was so important to him however that when Karyn told him she wouldn’t be able to see him if he was still smoking, he quit the day his sister went in for her lung transplant and never started again, so that he could be there with his big sister who had always taken such good care of him.

Randy loved watching wrestling, eating out and making people happy.  He loved animals and animals always loved him, even the dogs that don’t usually like humans would snuggle with him.

Though he clearly had health issues that he did not take seriously enough, he always presented like he didn’t have a care in the world.  If you asked him how he was doing, he would always say “I’m good.” In recent weeks he had been feeling tired all the time and clearly his diabetes was getting the better of him, but the last time he saw a doctor was a year and half ago.  Everyone is so sad that he did not pay more attention to his own health, always putting others before himself.

With his positive attitude to life, his smile and laugh and love of family and community, Randy Schwartz was a wealthy man and will be greatly mourned and missed by all who knew him.

Karyn and Rich, Carly and Yo, Devon and Kelly, Abah, Noah, Elianna and Ayla – we wish you all strength and comfort as you say goodbye to Uncle Randy.

As he loved to fix things, we ask Randy to intercede for us from a higher realm and help to fix this broken world!

Zichrono livracha – may his memory be a blessing.

Marc is a native of London, England where he was an actor and practitioner of complimentary medicine before training as a rabbi in London, Jerusalem and Los Angeles. He was ordained at the Ziegler School of Rabbinical Studies at the American Jewish University in 2004 and has been the the spiritual leader at Bonai Shalom in Boulder ever since. Marc was a close student of Rabbi Zalman Schechter Shalomi and received an additional smicha (rabbinic ordination) from him in 2014, just two months before he died. He has been the host and narrator of two documentary films shown on PBS; A Fire in the Forest: In Search of the Baal Shem Tov and Treasure under the Bridge: Pilgrimage to the Hasidic Masters of Ukraine. Marc is a graduate of the Institute of Jewish Spirituality, a fellow of Rabbis Without Borders, has traveled to Ghana in a rabbinic delegation with American Jewish World Service and co-chair of the Rabbinical Council and national board member of Hazon, which strives to create more sustainable Jewish communities. In 2015, Marc was among a group of 12 faith leaders honored at The White House as “Champions of Change” for work on the climate. Marc is a proud member of Beit Izim, Boulder’s Jewish goat milking co-op.
Previous Wear Orange This Weekend for Gun Safety
Next Brandeis U Panel: “Israel After the Elections”