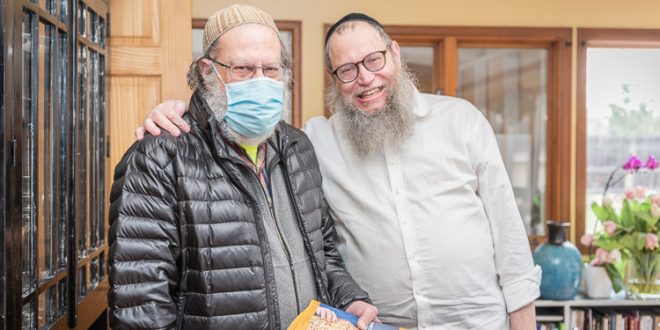 Chany Scheiner May 19, 2022 Lifecycle Comments Off on Eulogy for Henry Rasof

Hi! Some of you might know me, my name is Chany Scheiner of Boulder Center for Judaism/Chabad.

My husband and I have lived in Boulder for the last 30 years.  As such we have known Henry for a long time. Henry was an active seeker whose Jewish identity was important to him. In fact, my husband, Rabbi Scheiner remembers Henry telling him that he got much more involved in his Jewish roots when he moved to Boulder.

Henry had an interesting blend of an imaginative and scholarly mind with an eclectic sense of humor and topping that was a warm and caring heart.

Here are some of the memories that I have of him.

He always read through our emails very thoroughly and responded right away. Often, he was the first to mention any mistakes that he found.

I remember the time he hosted a community member who was going through a hard time.  He graciously opened up his home to him for a few months and they became close friends.

The way that he honored his mother and his father was exemplary. In an interview that we ran in the Boulder Jewish News, he said that he moved to Colorado so that he could be close to his mother in California and his Dad in Illinois and help them in their elder years.  Throughout his life, he was very intent on honoring his close family by giving charity in their name or observing their yahrtzeits.

Henry was someone dependable who could be counted on to complete a minyan and was a regular at events or holidays.

During Covid, he was more isolated so we tried to keep in touch on a more constant basis by speaking on the phone, home visits and some fresh food.

On Friday, February 11, I sent over a volunteer to deliver some fresh challah and soup to enhance his Shabbat. The volunteer let me know that no one answered the door and his message machine was full.  When I realized that his cell phone answering machine was also full, I had the Jcc send the police for a well check.  They found nothing amiss and thought he was away. Rabbi Scheiner still worried, and ended up going later Friday night with a community member prepared to break into his home.  They found him unconscious in his bed and sent him via ambulance to the hospital. Thank G-d, Henry rallied and semi recovered.

A special shout out to his dear friend and Power of attorney, David Osterman, for his devoted and loving care and leading Team Henry, keeping his family and friends posted and coordinating visits in the hospital and rehab to bolster his spirits.

Today is Pesach Sheini, the Second Passover.  Pesach Sheini was instituted for people who didn’t or couldn’t make or bring the Passover sacrifice at the right time, so they had a second chance to do so. It teaches us that it is never too late to make that same sacrifice of contemporary ideas to follow tradition.

Reb Zalman Schachter the leader of Renewal of blessed Memory, is an example of someone who sacrificed on a contemporary idea to follow tradition. For many years, he envisioned himself being cremated. However, at the last moments of his life, he changed his mind and asked to be buried instead.

Henry was very passionate and made sure that he would be buried in the traditional Jewish burial. For many months, Henry thought and discussed what to do when his time comes and how to be able to keep Jewish burial and tradition.

I would like to end with something practical that we could do as a mitzvah for Henry’s soul.

Although cremation has become popular in our society, just as Henry knew and was passionate about following the age-old Jewish tradition and Torah laws of burial, others can take a lesson and follow in his footsteps.

May his memory and his sacrifice be a deed that stands him in good stead and an inspiration to all that knew him!

Co - Director of Boulder Center for Judaism. Any successful organization needs a heart and that is what Chany provides, along with organization, marketing, innovative programming, and countless Shabbat dinners. Some of her accomplishments are large and public like the annual menorah lighting on Pearl Street and the matzo and shofar factories, while others are quiet and private like the time she spends counseling individuals and sharing the wisdom that comes from study.
Previous Weekly Edition: May 20th, 2022
Next Column: Arab Leaders So Sure – Yet So Secretive – About Cause of Al Jazeera Reporter’s Death