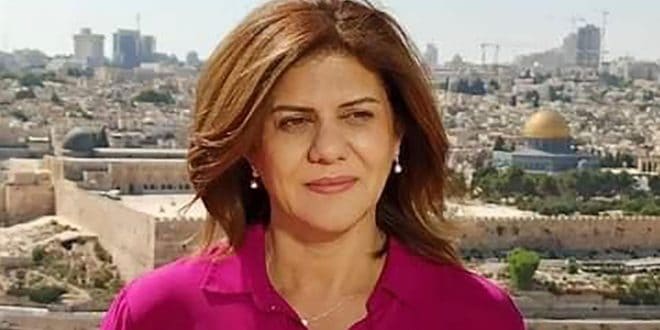 Bruce Ticker May 19, 2022 Guests and Blogs Comments Off on Column: Arab Leaders So Sure – Yet So Secretive – About Cause of Al Jazeera Reporter’s Death

The authority’s opportunity was to allow Israeli officials to inspect the bullet that killed the veteran reporter for Al Jazeera on Wednesday last week during an Israeli raid of Jenin, which is regarded as a hotbed of terrorist activity in Israel’s eastern territory (more commonly known as the West Bank).

This bullet has been pinpointed as the most specific evidence of whether an Israeli soldier or a Palestinian terrorist fired said bullet. Israel asked to examine the bullet, and the authority refused the request. Authority President Mahmoud Abbas announced that Israel “committed the crime.”

A bullet can be matched to the gun that fired it even though Israeli officials said both Israelis and Palestinians involved in the Jenin area clashes carried M16 assault rifles, guns that use the same 5.56-millimeter bullets, reports The New York Times.

Many people on both sides have been building their cases, but neither Jewish individuals nor Palestinian sympathizers represent an official entity. The Palestinian Authority is an official entity. Abbas and other leaders speak for the authority, usually not very well. The authority has limited government authority and when investigating Abu Akleh’s death it had the chance to disclose what it knows.

The authority failed miserably, as usual. Palestinian leaders consistently lie or at least exaggerate. It would be no surprise if they are crying wolf here. Israelis have come under fire for changing their assessments, but they have proven to be far more credible in the past.

“This crime cannot pass without punishment,” Abbas declared in an address in front of her coffin on the day after her death, according to the Times. “We reject a joint investigation with the Israeli state because it is the one that committed this crime, and because we don’t trust them, and we will go immediately to the International Criminal Court to pursue the criminals.”

That is garbage. It is not a question of “a joint investigation.” What is important is that all the evidence is shared with Israel and the rest of the world. If it turns out that an Israeli soldier fired the bullet, then Israel must take responsibility. Until then, Abbas and his crowd must cease spilling gasoline on the fire with its dreadful speculation.

Last Friday night, the authority’s public prosecutor released a report which the Times said “concluded Ms. Abu Akleh had been shot deliberately by Israeli forces. The prosecutors said they based their findings on an autopsy that concluded she had been shot in the head, bullet marks on a tree next to where she was killed and interviews with witnesses, including another Al Jazeera journalist who was shot in the back.”

Yet the authority refuses to disclose the evidence that makes this investigation conclusive. If they have proven that an Israeli fired the bullet that killed her, why don’t they tell us? One would think they would parade the bullet around to brag about such a revelation.

Maybe that is because an Arab terrorist caused her death, and they know it.

The Israeli Army released preliminary findings earlier that day which concluded that it was “not possible to unequivocally determine the source of the gunfire which hit and killed Ms. Abu Akleh,” the Times reports.

Shedding more doubt were statements by Ali Samoudi, another Al Jazeera journalist who wore a protective vest and was shot in the back. The Times cited the official Palestinian news agency, which attributed this information to the Health Ministry.

Samoudi said in a phone interview from his hospital bed, “There were no armed Palestinians or resistance or even civilians in the area. We walked toward the soldiers for about 20 meters. Then all of a sudden the first bullet was fired.”

The first bullet was fired from where? If he was walking toward the soldiers, how can they shoot him in the back?

Pesky questions, yes. How about some straight answers?

Bruce S. Ticker, who writes from Philadelphia, also blogs for The San Diego Jewish World and Smirking Chimp and previously for the suspended Philadelphia Jewish Voice. He was previously a reporter and copy editor for daily newspapers in eastern Pennsylvania.
Previous Eulogy for Henry Rasof
Next Chariots of Fire