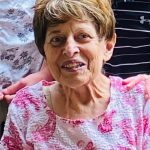 Olam Hesed y’baneh – the world is built with Hesed, with love, with kindness, says psalm 89.  In 1535 when Miles Coverdale translated the Hebrew bible, he could not find the right English word for the Hebrew hesed and so he invented the word lovingkindness.  The world is built with lovingkindness. Miriam Fields built her world with love, kindness, selflessness and care.  In fact for years, along with her friend Beverly Goodman, Miriam co-chaired Bonai Shalom’s Hesed committee, lovingly keeping in touch and caring for our congregational family when in need.

Miriam Lucille Fields was born on August 6th 1941 in Chicago, Illinois along with her twin sister Judith, to parents Robert and Irene Bower.  Judith passed away over 50 years ago and Miriam was always connected to her, speaking of her often. Miriam graduated from Stritch School of Medicine at Loyola University, as one of only four women to graduate in her class of 82 fellow Doctors. Miriam was a highly respected pathologist and served as the head of pathology and the Chief Medical Director at Walther Memorial Hospital in Chicago. She was an amazing role model to Amy and Adam, who remember going to work with her and realizing how intelligent and driven she was in her work, which certainly influenced Adam’s own career.

Amy and Adam have incredible memories of growing up with this “one woman wonder.” Miriam took the kids camping by herself, on island vacations, scuba diving adventures and, of course, the ski trips.  Everything that she exposed her kids to is ingrained in them and part of who they are and Amy and her family’s life in Crested Butte was definitely influenced by Miriam’s love of the mountains.

She took them all over the country to speed skating meets and later the grandkids hockey games. Miriam was the ultimate cheerleader.  She was happiest spending time with family and watching her grandkids play hockey.

Miriam moved to Boulder in 2003 to be closer to her children and was welcomed by the Bonai Shalom community, where, as mentioned, she was active and involved and made some very close friends. Judaism was quite central to Miriam’s life and we had some spirited conversations about prayer, practice and theology in recent months.

Miriam’s grandkids adored her. They loved joking around with her and held nothing back.  She took them all to Florida when the grandkids were little and they loved doing experiments together at the Science museum. Adam said “she let us live, learn,and experience places that we would not otherwise have seen.”

Miriam was incredibly smart and Amy would always go to her for her wisdom and knowledge. She was selfless, always putting others before herself, even when she was struggling with her own health.  Shortly after Sam was born, Miriam came to town and worked in Amy’s store, Mommy and Me, for 5 weeks so that Amy could be home with Sam.

Miriam had a great and sometimes quite dry sense of humor, which regretfully I only discovered recently, as her humor and good spirits kept her going through all of her medical challenges, even right towards the end, along with her strength, resilience, intelligence and mental clarity. Miriam was an amazing human, who built her world with love and has been a true inspiration to her family and her friends.

Miriam was a loving mother to Amy and Adam, mother-in-law to Joe and Emily, and the beloved Bubbe to grandkids Sam, Max, Cooper and Brody, and a devoted friend to many.

Comfort and strength to the mourners and may Miriam’s memory always be a blessing and an inspiration!

Marc is a native of London, England where he was an actor and practitioner of complimentary medicine before training as a rabbi in London, Jerusalem and Los Angeles. He was ordained at the Ziegler School of Rabbinical Studies at the American Jewish University in 2004 and has been the the spiritual leader at Bonai Shalom in Boulder ever since. Marc was a close student of Rabbi Zalman Schechter Shalomi and received an additional smicha (rabbinic ordination) from him in 2014, just two months before he died. He has been the host and narrator of two documentary films shown on PBS; A Fire in the Forest: In Search of the Baal Shem Tov and Treasure under the Bridge: Pilgrimage to the Hasidic Masters of Ukraine. Marc is a graduate of the Institute of Jewish Spirituality, a fellow of Rabbis Without Borders, has traveled to Ghana in a rabbinic delegation with American Jewish World Service and co-chair of the Rabbinical Council and national board member of Hazon, which strives to create more sustainable Jewish communities. In 2015, Marc was among a group of 12 faith leaders honored at The White House as “Champions of Change” for work on the climate. Marc is a proud member of Beit Izim, Boulder’s Jewish goat milking co-op.
Previous Join Beth Ami Congregation for Our Social Shabbat and BYO Picnic
Next Letter: Boston Mapping Project: Latest Version of IBM’s Mapping Germany’s Jews for the Nazis