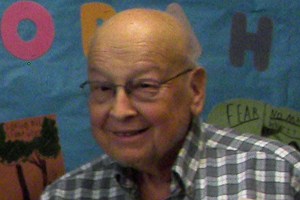 A Eulogy for Howard Steinmetz z”l

Howard fought for every breath of life and every moment in this world, defying anyone to predict the moment that he was going to leave this physical world. A couple of weeks ago he reminded me of the story about a non-Jew leaving without saying goodbye and a Jew saying goodbye without leaving and he told me that he was the old Jew who kept saying goodbye, but was not leaving! Howard was the quintessential planner, always asking those around him what their five and ten year plans were and, as well as multiple pockets in every garment, prepared for all eventualities. To be honest, this was not in his plans. In fact, he wrote his own epitaph which marked the year of his death as 2022! Even though, it was not his plan to leave right now, he eventually accepted it and seemingly even chose the moment of his own exit. His 78th birthday came and went and then it was unclear that he would make it to Thanksgiving, but that too passed, as did his beloved Barbara’s birthday the following day. It was a beautiful, sunny Shabbat morning and all of the family had arrived and were around and they put him in his bed right by the window in the sunlight in his house and a few moments later he breathed his last breaths. The loving care, attention and presence that Barbara especially, and the rest of the family have been providing throughout this process is so deeply beautiful and inspiring. A peaceful, perfect ending to the extraordinary story of Howard’s life in this world. One of the family’s favorite memories of Howard is that, no matter what he was wearing, every morning in their home in Saginaw, Michigan, he would fling open the door and call out, “Hello world!” Barbara said yesterday that she imagined him saying, “So long world!”

Howard was born on November 12th 1932 in the Bronx, New York to his immigrant father Julius and his mother Eva. From 12 years old he started making deliveries for the family grocery store and then kept a list of all the jobs that he did in his life since then. He learned important lessons from his mother about the value of everything and that nothing comes for free and he, in turn, taught valuable, though sometimes cryptic, lessons to his children and grandchildren, who he adored, and really to all of those around him. He was actually a very ordinary kid with c’s and d’s on his report card and his parents had no special hopes of what he was going to do with his life and yet he found creativity, excitement and a great deal of curiosity for everything and everyone, far exceeding his parents’ expectations. For Barbara, this is a really important lesson for parents; that you never know what a child may become or may achieve. Howard was recently inducted in the Advertising Specialty Hall of Fame, primarily for his work with corporate incentives in creating safety programs in industry. Howard certainly achieved a lot and has influenced and empowered others along the way; whether setting up two women in business, changing the way people think about genealogy, or just being present in the moment in funny and interesting ways with his grandchildren, for whom he will always be Papa.

Julie reminds us that he was always quiet about his successes, shown by the fact that they had a really nice house in Michigan, but it was in the woods where no one could see it. He was humble and modest, without being shy to speak his mind or make his will clearly known. The family all agree that nothing whatsoever could embarrass Howard, even though his wife and daughters were often embarrassed by him. Barbara told us that for years, wherever they would go, and they went to a lot of interesting places, Howard would from time to time call out, “Anyone here from Saginaw?” One time in the middle of a small store in Hong Kong, someone said, “yes.”

Howard never really cared what anyone thought and needed neither validation nor status; he did things in his own way as an individual, yet he was far from selfish. Monica shared that he always loving and generous, to friend and stranger alike; and he was a really nice dad, who always supported her fully, even when he did not agree with her choices.

It is perhaps Howard’s great sense of curiosity that most defines him. Barbara told us that they made the road trip from Michigan to Colorado dozens of times, and yet it was never a straight road, as they always met surprising and interesting people and went out of their way to see amazing and unusual sites off the beaten track. That characterizes Howard. Whoever he met was his new best friend, and he was always able to get someone to tell their story and make those around him feel important and special, especially all the women in his life! Whether it was architecture, modern art, literature, the Mayan Indians, or more recently, Jewish genealogy, Howard’s curiosity took him and others beyond the straight road. Barbara says that Howard is in the Guinness Book of Records for having the longest mid-life crisis ever, yet he turned that crisis into his fascination for Mayan culture, which took him to Copan in Honduras. When he was first diagnosed with cancer, Howard began his ancestral journeys in the world of Jewish genealogy, which took him to his father’s home town of Rohatyn in Galiciana. His curiosity changed the way many people in the world of genealogy think, because rather than focusing on “who begot who” Howard’s focus was on who the people were; it was the details of their lives that caught his attention.

Howard and Barbara at Camp Tamarack in Michigan and, even though Barb’s parents did not approve initially, they were married in 1956 when he she was 19 and he was 23. Fifty-four years of marriage; of devotion; of never taking that straight road. They begot three beautiful daughters Julie, Ivy and Monica with whom their unconventional adventures continued and, of course, the terribly sad and untimely loss of Ivy just under a year ago has been so devastating to this wonderful family. Yet even then Howard always somehow managed to put a positive spin on life. We all know how very hard these two great losses within a year are for your family and we offer you all the love and strength in the world, knowing and praying that the great support of your family, friends and community brings comfort and healing.

Bruce, Brad and Willy, the three sons-in-law, and sometimes out-laws, all have their own special memories of Howard and Willy reminded the family of a time recently when Howard was in the yard and fell and could not get up and, finding water guns near by, he turned his fall into an opportunity to play with his youngest grandchild Eden, squirting him with water. This story is, for this family, a reminder and an invitation of the power of being in the moment. Zane, Sierra, Maya, Asia, Isaac and Eden, all have wonderful and goofy memories of Papa, or The Big Turkey as Maya called him; their grandfather who adored them. Whether crawling around on the ground, cryptically hiding money for who-knows-what lessons, telling bad and sometimes dirty jokes or giving extremely sensible and practical advice, he was always present with them.

In the five years that Howard and Barbara have lived in Boulder, they have really inserted themselves in this community and made so many friends and Julie shared that it has been a real blessing that her dad got to live here and that people got to know him. Howard became deeply involved with the Jewish community; the communities of seniors; writers; genealogists; cancer survivors’ yoga and water aerobics classes, at both of which he was the only man and felt hurt when lunch plans were made in the women’s locker room, excluding him. He will be missed in all of these worlds, as he has impacted so many people in the journey of his life.

In the Mishna (Avot 4:1), the ancient rabbi Ben Zoma asks some questions, including: Who is wise? Who is mighty? Who is rich? Who is honored? His answers all seem to relate to Howard Steinmetz and the legacy that he has left. Aizeh hu hacham? Halomed mi col Adam. Who is wise? The one who learns from everyone. Howard’s curiosity. Aizeh hu ashir? Who is rich? Hasameach b’helko. The one who is content with what they have. Howard’s ability to be in the present moment. Aizeh hu m’chubad? Who is honored? Ham’chubed habriyot. The one who honors others. Howard’s humility and respect for others.

Barbara shared that Howard was a warrior even though he was a hen; a lady’s man, but a man with a very strong will and, she said, in many ways, he was a simple man, not a perfect man. In this moment, on this Thanksgiving weekend, we are so grateful for the gift of Howard’s life in this world and all that he has taught us and offered us, especially his determination and love of life, which inspires us all to love and embrace life as fully as we can in each moment.

To Barbara, to Howard’s sister Gladys, to Julie and Bruce, Monica and Brad, to Willy, to Zane, Sierra, Maya, Asia, Isaac and Eden, we say hamakom y’nachem etchem – may God grant you comfort in your mourning; and to you all and to all of us who had the honor to know Howard Steinmetz, we pray, zichrono livracha, may all of these memories and the many other memories that have been shared and will be shared, be for a blessing to give us strength, inspiration and courage to be the best we can be in this world. Zichrono livracha.

Marc is a native of London, England where he was an actor and practitioner of complimentary medicine before training as a rabbi in London, Jerusalem and Los Angeles. He was ordained at the Ziegler School of Rabbinical Studies at the American Jewish University in 2004 and has been the the spiritual leader at Bonai Shalom in Boulder ever since. Marc was a close student of Rabbi Zalman Schechter Shalomi and received an additional smicha (rabbinic ordination) from him in 2014, just two months before he died. He has been the host and narrator of two documentary films shown on PBS; A Fire in the Forest: In Search of the Baal Shem Tov and Treasure under the Bridge: Pilgrimage to the Hasidic Masters of Ukraine. Marc is a graduate of the Institute of Jewish Spirituality, a fellow of Rabbis Without Borders, has traveled to Ghana in a rabbinic delegation with American Jewish World Service and co-chair of the Rabbinical Council and national board member of Hazon, which strives to create more sustainable Jewish communities. In 2015, Marc was among a group of 12 faith leaders honored at The White House as “Champions of Change” for work on the climate. Marc is a proud member of Beit Izim, Boulder’s Jewish goat milking co-op.
Previous Abigail Bloomfield Bat Mitzvah
Next This Week for CU’s Jewish Buffs

Teagan Forrest will celebrate her B Mitzvah on Saturday, June 11 with Congregation Beth Ami.

On Saturday, May 28th, 2022, Madden Scheff will be called to the Torah as a Bar Mitzvah with Adventure Judaism.