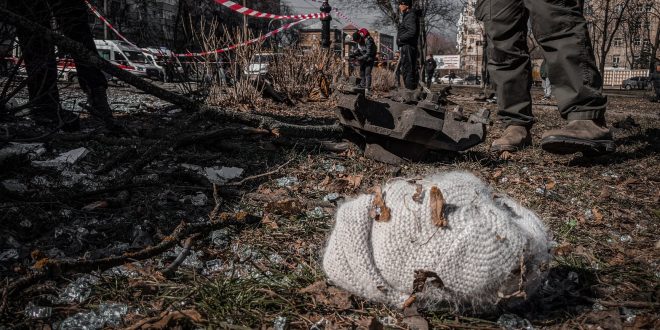 Lisa Tremback March 24, 2022 Arts & Culture Comments Off on Will We Be A Bystander to Genocide?

I was a peacenik in the sixties

when all we had was Viet Nam on T.V.

I grew up on the belief that peace must be met

with any price, but war.

the Ukraine is fighting a difficult war

between men and men who are monsters,

so many of our roots are bound

by the very same blood in the soil.

These refugees are our family

carrying whatever one can hold

One girl’s cat held onto to her jacketed shoulder,

shell shocked as her owner,

shy to the eye of the camera.

Are we Jews who know what freedom means?

Where are the Jews as bombs rain down?

For these  are modern Maccabees,

fighting against those that will take their lives,

that have destroyed their towns,

Were we the ones who’ve said, “Never Again!”

After the war that took so much.

Holding arms length from a country,

whose civilians are beging terrorized,

and worse yet, killed.

I am not talking about just the Israelies,

no, where are world’s young men who say,

I believe in sacrifice.

In fear of blowing to smithereens,

We are on a ship’s whose helm

Is a madman searching for the Great White Whale.

The Russians are behaving no better than Cossacks

who burned down villages and raped the women

It’s all in your point of view.

There are just so many of us, and never enough

when we see the land on a map.

who lace the landmasses as little pools.

until it became almost too late,

but the damage was done,

schools were lost, and a culture destroyed.

Will we do the same again?

Be a bystander to genocide?

while a Charlie Chaplin movie comes to mind.

I started writing in Elementary school and was published in school and local newspapers. I graduated from Columbia College in Chicago and studied under the poet, Bill Knox. I have been published at Colorado State University's underground newspaper. I enjoy writing almost every day and love to write about my relationship with G-d.
Previous Weekly Edition: March 25th, 2022
Next Column: Sex And the Simplistic Pro-Arab Apologist