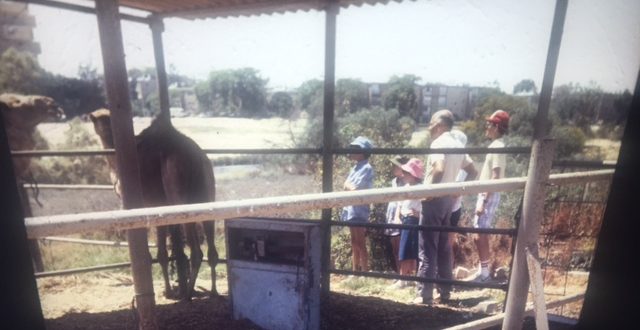 Some Roots of Our Interest in SIPP (Sustainable Israeli Palestinian Projects)

On Thursday, May 12, 2022, at 6:00 pm, Naty Barak, the Chief Sustainability Officer Emeritus of Netafim, will be the keynote speaker at Jewish National Fund-USA’s and Boulder Jewish Community Center’s (JCC) joint community event, From Israel to the World: Israeli Innovations in Using Water to Produce Food at the BJCC.
When we were on a month long family visit to Israel in 1986, on a Denver Federation sponsored trip, Kesher, we saw with our own eyes the very leaky pipe where the inspiration for Drip Irrigation was born.
Seven families from Denver and Boulder spent Wednesday evenings learning about Israeli culture and basic conversational Hebrew, for over six months. The sessions were led by the then Denver Shaliach for the Jewish Agency, Ami Yemeni, a Yemenite, who would act as our trip leader, and his wife, Batya.
We and our close friends toured on our own before the program began, climbing Masada to see the sunrise, visiting the En Gedi Nature Preserve, and floating in the Dead Sea., We visited one of Batya’s brothers, who showed us the leaky pipe at “the farm where it happened.” Today the principles behind Drip Irrigation developed by Simcha Blass, who founded Netafim, who are presenting this Thurs at the Boulder JCC, help fertilize fields around the world.
We spent three weeks on a Moshav in the Gush Segev, west of Haifa, not far from Karmiel, Denver’s Sister City.  We lived in the original ‘residences’ of the Moshav, together with rudimentary plumbing, scorpions, spiders, spiny cacti, etc.

We shopped at the Moshav dispensary, and cooked our own food. The younger kids went off to day camp, while the older kids and adults worked at various tasks, at the Moshav’s greenhouse, craft center, binding books at the adjacent Moshav Center Library, and weeding other Moshav gardens.

The Moshavim were all situated on the hilltops, and the low flatlands were farmed by the local Arabs.
We had dinner with the family, who originally lived where we were staying, in their new much more modern home. We also visited with the families of the friends our kids were paired up with. One of the fathers was the son of the of first head of Israel’s National Park Service. Another was a family from South Africa.
This part of the Galilee was where Rabbi Akiva, and the other Talmudic scholars fled from the Romans, and I remember one jaunt, where my friend and I passed through some of their home villages, like Sakhalin.
On weekends, we would jump into our Seven Subarus, and Ami would lead us mostly through the North of Israel. We visited a small Arab hill town and talked with the mayor and a small Israeli hilltop settlement connected to Denverites. We visited the Kibbutz where, Batya, Ami’s wife, grew up, and another where the economy of the Kibbutz had transitioned from agricultural to centering on producing high tech products.

We got as far as the town of Lod, typical of the then-economically-distressed communities of Sephardic Jews resettled from the Middle East, not far from Ben Gurion International Airport. Here we were hosted by the mayor, Israel Prime Minister Yitzhak Shamir’s brother, and watched kids performing karate. Ami even took us to a Yemenite wedding.

On our own we visited a park, jumping into the cold mountain pool under a beautiful water fall, drove through the Golan where the ancient Israeli Druze communities live, where you could see the Syrian border. We passed by the entrance to Tel Dan, the home tribe of Samson, where the excavations exist of the Ancient northernmost Israelite sanctuary, which are today under the supervision of David Ilan, frequent visitor and lecturer in Boulder, and at CU, on topics archeological.
The family trip that summer made a deep impression on us, and especially on our children. Our then-14-year-old son would return to Israel, where he would do his Junior Year Abroad, taking classes from some of the top Political Science profs at the Mount Scopus Campus of Hebrew University.

Sid Fox renewed his interest and study from his Hebrew School days (where he was inspired by Deborah Pessin's insightful series 'The Story of the Jewish People') when he read James Michener's "The Source". Sid eventually taught a two semester Sunday class for adults at their home when their children were at Sunday School. It was based on 15 years study of the Bible, the three hundred years of modern research and Biblical Archaeology areas he continued to pursue as he branched out to Shakespeare, the Classics and other interests.
Previous Boulder JCC Hosts Blood Drive on June 1
Next Weekly Edition: May 13th, 2022