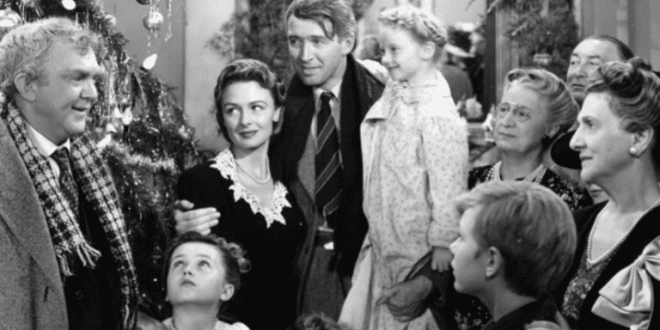 What Makes “A Wonderful Life?”

Many films of magical realism appear this time of year, across many cultures. One perennial favorite is Frank Capra’s ‘It’s a Wonderful Life,’ which first appeared when I was only three years old. In 2006 it was voted the most inspirational movie of all time! I was determined to figure out why it became so popular and what could be a Torah connection. I watched it over and over, both in black and white and in color. Its universal message transcends its particular religious milieu, and so can easily be viewed from a Jewish perspective. The theme in brief is how each individual life is, or at least can be, vital to the well-being of a great many people. Roger Ebert called the movie one of the few that ‘can be viewed an indefinite number of times.’  The star, James “Jimmy” Stewart, considered it his favorite film!

Stewart plays George Bailey, a typical young man who can’t wait to leave the confines of his small town in Bedford Falls. Except he is not typical in the sense that from his childhood, he deeply cared about others. Often throughout his life, his ambitions and his empathy clash, and most of the time his empathy wins.  His more personal aspirations seem to be cast by the wayside. Time and again he seems to be there for others more than for himself but he doesn’t always see his caring to be so positive. Thus he gives up his personal dreams in order to come to the aid of his community.

In the short term, his experiences seem to fulfill the sardonic adage, ‘No good deed goes unpunished.’ Each time he is ready to leave the constraining context of his small town, something comes up to keep him there. His father has a stroke so he has to take over, his brother can’t take his place in the family business of the Building and Loan Company, and he gives up his hard earned honeymoon money because there is a run on the bank.

The final straw that drives him to the desperation of gravitating to a bridge to consider suicide is when his uncle loses the entire payroll of eight thousand dollars. To rub it in even more, the town’s malevolent mogul finds the money, keeps it for himself and tells George that his salvation lies in joining his ranks. Mr. Potter is evil incarnate and expresses the sages’ dictum in Pirkei Avot, Ethics of the Fathers, that ‘jealousy, greed, and desire for honor drive a person from the world.’ (Unfortunately, we don’t see Potter getting his karmic comeuppance in the film but we can assume he loses his moral grip on the town by the end).

Just as George is about to give in to the ‘dark side,’ he taker Potter’s hand but then shakes it off, as he realizes how contaminated his life would become in an unholy alliance. However, George is still far from seeing his way out, both materially and spiritually.

Here’s where higher beings come in. In his moments of desperation, George prays to God and is sent a second class angel named Clarence to save him from suicide by showing him HOW MANY PEOPLE WOULD SUFFER IF HE NEVER LIVED. What George thought were just insignificant niceties to ordinary people, ended up saving many lives and sanity.

I can kind of relate. In my twenties I fell into a depression and was toying with the idea of taking my life. Then one day I was returning some books to the library and got stuck in a big traffic jam. I got bored waiting and reached into the back seat for one of my overdue books and pulled out a psychology book called ‘The Transparent Self’. I mumbled a silent prayer of needing some advice, and opened ‘at random’ to a page with this counsel: ‘If you ever think about taking your life, maybe it’s because you feel like a snake whose skin has gotten too tight. All you have to do is stretch your skin, broaden your horizon, and think beyond your present difficulties.’ For me that was enough of a message for me to be reluctant to close the book of my life before a divinely determined ending.

Now for some Torah associations to the film. As we begin the book of Exodus, Shemot, which really means ‘Names,’ we focus on the power and importance of individual names. The Israelites start off as slaves without a name, sort of similar to the victims of Holocaust. Eventually, as they move toward Sinai they each can find their unique names. In fact the first mention of ‘God fearing names’ were the two midwives who put their lives in danger to save the new born babies. Then we meet Pharaoh’s daughter who saves baby Moshe in defiance of her father. The sages tell us that even though Moshe had ten names, the one chosen by God was the one given by Pharaoh’s daughter, the name that means not only ‘pulled from the water,’ but can also mean the one that ‘pulls others from the water.’ Thus, paradoxically, names seem to come to the forefront in the Torah when people go beyond their private comfort zone.

In the movie, when George gets called by his name the most times, are when people who he reached beyond himself to help, come to express their gratitude, by calling his name.

The Torah is filled with seemingly minor gestures that have monumental effects. A few examples: In Genesis, when God visits the ninety-year-old Abraham on the third day after his circumcision, Abraham chooses to leave his state of divine communion, to tend to strangers in the overbearing heat of the day. Earlier, when he and Lot his nephew reach the Egyptian border, Avraham places his wife Sara in a container so the Egyptians will not take advantage of her striking beauty. At the border, the guards ask what is in the container. Lot says nothing even though he knows, and even though if Sara would be imprisoned, Isaac may have never been born, and Lot would become Avraham’s heir. According to the sages, not only is Lot praised for his silence, he is rewarded by become the ancestor of Mashiach, the one who will lead the entire world to a state of peace and wisdom!

In Exodus, Moshe too is faced with a hard choice- To intervene in saving the life of a fellow Jew, or remain safe in the cocoon of Pharaoh’s palace. He chooses the former, which puts him on Egypt’s most wanted list, and has to flee. Later, when Aaron, the senior brother who has led the Israelites for forty years, sees Moshe being appointed leader, he is happy with the choice. As God tells Moshe, ‘he will see you and be happy in his heart.’ No one would blame Aaron for feeling a modicum of jealousy, so the sages insist that if Aaron would have realized the greatness of his generous spirit, he would be carried on people’s shoulders in celebration.

In many of these situations, angels make an appearance, but in the tough moral decisions, it is human choice that prevails. Are angels responsible for such heroic acts of character? I suspect it may be the reverse. In other words, it is those resolutions to reach beyond human nature that create the angels. According to the sages, we all have guardian angels, and most are created from our own deeds. This is part of the image of Jacob’s ladder, where the angels move up and down.

Thus if “It’s A Wonderful Life” were Jewishly oriented, it could well be that the angels created from George’s helpful acts would prevent him from falling into the kind of anguish that would push him to wanting to take his own life. And it is after resisting that impulse that the beauty and the sense of a wonder-filled life not only returns, but is amplified many fold, much like people who emerge from a near-death experience.

For example in George’s life, stuff that annoyed him before, after recovery, he is so grateful for- little things like the loose knob at the bottom of the staircase that so frustrated him- now he kisses it after it comes off in his hands as he climbs the stairs. And his kids who annoyed him in so many ways before, he now ‘kvells’ from them! And above all, the tons of friends that come not only to thank him for his compassion, but to offer him their ‘nickels and dimes’ and more, to restore his finances.

This realization of how our smallest acts can impact the world on a global scale, is why I feel this film is so uplifting and inspirational to people since its inception. Actually, from the forties to the seventies, the movie was cast aside. It’s as if it needed those post-war years for its roots of optimism to take hold. Now in our generation, with different kinds of battles taking place, this film provides hope to a time and generation that is gutted with darker anti-heroes. Of course we can’t and shouldn’t overlook the angst, chaos, and despair that permeates even or especially our times. But the fact that people feel uplifted by films like “It’s A Wonderful Life,” gives us confidence that the unyielding hope in the benevolence of humanity refuses to be beaten down by all the difficulties of life. The Baal Shem Tov taught that sometimes a soul comes down to earth for seventy or eighty years just to do one favor for another person, materially or spiritually. It is indeed small acts of kindness that can also have a cumulative impact enough to accelerate the promised redemption that we so need and long for with the coming of Mashiach, speedily in our days.

I have been teaching Torah and Chassidic writings for over forty years to students of all ages and backgrounds, both on the East Coast and the Midwest. I have been a director of several Jewish organizations in Santa Fe and Colorado. My articles and poetry on a wide variety of Jewish topics have been printed in many publications, and also are available online.
Previous JEWISHcolorado & Federation Honor Jackie Sprinces Wong with Kipnis Award
Next Join a Free Monthly Caregiver Support Group