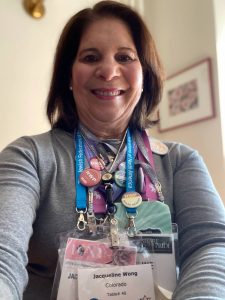 “This is my bling.” Jackie Sprinces Wong is referring to all of the nametags and trip credentials she’s saved from 13 Federation missions to Israel, numerous trips to Jewish communities around the world, and 19 of the past 20 annual Jewish Federation of North America (JFNA) Lion of Judah conferences.

“It’s meant so much to me,” said Sprinces Wong, whose involvement in JEWISHcolorado dates to the early 1990s—and Wong has meant so much to JEWISHcolorado. Now, having served the Denver-Boulder Jewish community for the last quarter century, she is being honored with the community’s 2022 Kipnis-Wilson/Friedland Award for her exceptional philanthropy.

The Kipnis-Wilson/Friedland Award was created as a tribute to Norma Kipnis-Wilson and Toby Friedland, of blessed memory, who co-founded Federation’s Lion of Judah program in 1972. Today, more than 18,000 Lions of Judah around the world contribute $5,000 or more annually in their own names to a Jewish Federation Annual Campaign. The Award honors extraordinary women who have set a high standard for philanthropy and volunteerism and who have a lifetime of commitment to the Jewish world.

“I owe my commitment of Jewish giving to anonymous donors in the Federation system,” Sprinces Wong said. As a child, she received a scholarship to attend a Jewish summer camp for what she described as “three glorious weeks” at Golden Slipper Camp, a Jewish overnight camp in the Pocono Mountains of Pennsylvania. According to Sprinces Wong, this one-time experience was made possible by donors to the Jewish Federation of Greater Philadelphia, through Golden Slipper Clubs and Charities.

“It was their generosity that made an enormous impression on me; they gave unrestricted dollars to their Flagship Fund so an underprivileged child could attend Jewish summer camp. In my case, as a scholarship recipient, I didn’t know the donors, and they didn’t know me. They gave for the pleasure of tzedakah, and those generous dollars helped my family,” she said.

Sprinces Wong continued, “My mother worked at a luncheonette near a gypsum plant in West Philadelphia that she opened and closed each day, and my father had a sales route, selling inexpensive stockings and pantyhose to small grocers. Most days, they worked late in the evening. But for those three summer weeks, my parents had peace of mind about where I was.”

Because of that, Sprinces Wong said, “I went from being a recipient to being a donor. It changed my life, and I’m so grateful.”

“Jewish camp triggered my love for Judaism. I left with a greater sense of Jewish identity and a thirst to learn all about what that really meant. My family couldn’t afford to be members of the neighborhood synagogue so I would sneak into the neighborhood synagogue to participate; I went with my friends to their Hebrew school classes. I was a leader in Hadassah’s Young Judea youth activities all throughout high school. And, eventually, I even earned a BA and MA in religious studies with a focus on Genesis.”

Many years later, in 1994, Sprinces Wong took her first trip to Israel with the Federation. She remembers traveling with longtime community members, including Marsha Gardenswartz, z”l, Judge Phil, z”l, and Candy Figa, Audrey and Andy Franklin, and others. “That was my first real experience working with the Federation.”

And she hasn’t stopped since.

Sprinces Wong recently completed simultaneous terms on the JFNA Board of Trustees and on JEWISHcolorado’s Board of Directors as chair of the Planned Giving and Endowment Committee. She also served as the JEWISHcolorado Annual Campaign chair from 2015-2018. In 2010, Sprinces Wong was the recipient of the annual Golda Meir award, and she is a member of JEWISHcolorado’s Prime Minister Council, a giving society for the organization’s leading donors. For a dozen years, she served as principal of Teen Hebrew High in Boulder, a program of the Central Agency for Jewish Education (CAJE), now a part of JEWISHcolorado. “Twelve years of Wednesday nights with 100-plus teens was absolutely exhilarating,” she said. “We gave scholarship grants to so many Hebrew High students, as well as grants for the annual Joyce Zeff Israel Study Tour—those dollars came from JEWISHcolorado donors,” said Sprinces Wong.

A strong supporter of JEWISHcolorado’s Women’s Philanthropy program, Sprinces Wong said that she’s looking forward to the return of the annual Lion conference in 2023; the 2022 event was canceled due to the pandemic. It’s at the 2023 conference that Sprinces Wong and other Kipnis recipients from across the Federation system will be honored. “I was hooked from my first Lion conference,” she said. “The speakers and the camaraderie of women excited me. It’s been an important choice to remain a Lion donor. I know from personal experience that those dollars support so many important programs—and so many hopes and dreams.”

Sprinces Wong emphasized the importance of not just giving once or twice but of taking the long view. “The reason I think it’s valuable to give regularly over longer periods of time is because that way you can see change occur. If you want to build or a sustain a program, you can’t simply give for one or two years. What happens the third year, or the year after that?” she asked.

She’s taken her own advice to heart: “In 2005, I chose to become a LOJE, and that Lion of Judah Endowment guarantees my monetary gift into the future, even after I am gone.”

In addition to the philanthropic and volunteer legacy that Sprinces Wong has built, perhaps the most telling legacy is that of her own children. Her and her husband Mark’s four children, Brett, Seth and his wife Ashleigh, Dara, and Kezia, have begun to follow in their mother’s footsteps. Already, her son Seth is part of the board leadership at JEWISHcolorado.