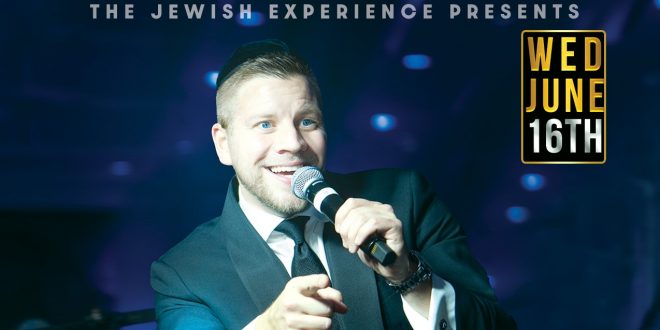 Denver, CO: The Jewish Experience is excited to present The EPIC Summer Concert featuring Mordechai Shapiro in his first Denver appearance. The concert will be Wednesday, June 16th at The Levitt Pavilion, located at 1380 W Florida Ave, Denver, CO 80223. Tickets are $35 for adults, $25 for children under 12, and children under 5 are free. VIP Tickets are also available for $360 per couple, which include reserved seats, a curated wine and cheese box and an on-stage meet and greet with Mordechai Shapiro. Doors, food trucks and bar open at 6:00 pm, program and show begin at 7:30PM. Tickets are available online at www.TheJE.com.

“It’s exciting to be able to invite the whole community for an outdoor concert with a musical talent like Mordechai Shapiro, at an exciting new venue like the Levitt Pavilion” said The Jewish Experience Managing Director, Rabbi Raphael Leban, “This will take the place of our annual Wine & Cheese, and also celebrate the culmination of our EPIC Sinai Pass program.”

About Mordechai Shapiro: Mordechai Shapiro is a New York-based singer, songwriter, dancer, and actor. Formerly a soloist with the Miami Boys Choir, he is among the most popular voices on the Jewish music scene. His videos for songs such as 2017’s “Machar” and 2019’s “Hakol Mishamayim” (co-written with Miriam Israeli and the title track of his third album), have racked up millions of views for their insightful and uplifting narratives.

He self-produced the video for “Schar Mitzvah,” which went viral in the Jewish community. It led to his independently released 2016 debut album, Kol Haderech, with a focus on releasing accessible, well-produced videos. 2017’s Machar was led by a self-composed single of the same title. Its message of resilience, and not giving up before the miracle happens, earned him his first big hit in the Jewish music market. It charted internationally and its video rang up more than three million views. In 2019, he issued the video single “Friends,” a humorous documentary that featured his skydiving trip with star vlogger Meir Kay. It was followed by “Hakol Mishamayim,” the lead track for a 15-track namesake album. The full-length landed well inside the Top Ten on the Jewish music charts.

They call me "NewsHound IV," because I'm a clever Finnegan, sniffing out stories all over the Boulder area. I love Jewish holidays because the food is GREAT, especially the brisket. Well all the food. I was a rescue pup and glad to be on the scent!
Previous “Shtisel” – The Magic And The Mystery
Next Celebrate a Humanistic Shabbat with Beth Ami Congregation

L’Chaim – A Monthly Taste of Jewish Music from – Anywhere!