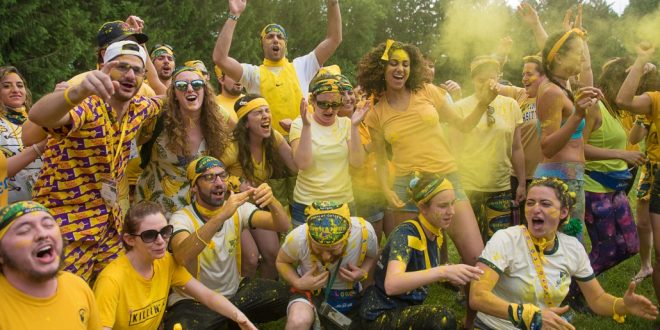 NEW YORK — A global network of communities for young Jews is applying its expertise in developing immersive experiences by providing people a creative outlet to come together from their very own homes. With countries worldwide largely under quarantine, Moishe House is pivoting its focus from in-person gatherings to  a completely interactive experience.

“Color war is a quintessential part of summer camp that builds community and brings people together in friendly competition. Expedition Nai’s challenges were designed to be inclusive, accessible and to generate creativity, an opportunity to engage in Jewish identity, and a sense of relief from the day-to-day experience of quarantine. We look forward to seeing more people join us in what has become a shared experience during a time none of us will soon forget.”

Expedition Nai is named after Camp Nai Nai Nai, Moishe House’s annual summer camp that brings Jewish young adults together. After hosting two sold-out camps in 2019, Camp Nai Nai Nai was set to host three summer camps for adults this year. Camp East, the first and largest of the three, was scheduled to host over 300 adults in their 20s and 30s over Memorial Day Weekend. Unable to continue with in-person programming due to the COVID-19 pandemic, Moishe House acted quickly to create an alternative opportunity for people from around the world to come together in the spirit of Jewish summer camp. The Midwest and West Coast camps are slated for the fall.

Inspired by “challenges” announced each Friday, participants are vying for points and prizes by spontaneously singing songs with neighbors from across the street, making music videos, recreating science experiments, and celebrating Jewish traditions. New participants can start playing at any point and can join as individuals or teams of up to five people.

Each week, Camp Nai Nai Nai announces the winners of $50-100 prizes based on points earned for submitting responses to challenges. Additionally, Week One paper plate awards honoring creativity in the style of those awarded at camp were presented via a video compiling winners’ submissions. A pop tart chef won cookbooks, a tailor team that turned a skirt and top into Mickey Mouse ears took home an Etsy gift card, and the Hive Golden Five turned Passover leftovers into matzah croutons, leading to earning a $100 gift card to a local restaurant of the winner’s choice.

The competition will culminate May 22 as all teams are invited to join a global gathering. The best of the expedition will be celebrated, and the team earning the most points will be announced as the grand prize winner, taking home the glory with $1,000 cash plus five $100 gift certificates to businesses local to their areas.

Throughout the month, Expedition Nai offers additional opportunities to come together live with fellow participants. Those registered are invited to join daily “playshop” sessions – because there is no “work” at camp – with specialists on a variety of topics leading sessions on do-it-yourself projects and Jewish engagement.

“More than anything right now, people need imaginative ways to be together and celebrate each other,” said Moishe House Founder and CEO David Cygielman. “Through our global network, Moishe House is committed to providing resources and activities that inspire Jewish community and build meaningful spaces for Jewish life, wherever that may be, and whatever is going on in the world around us. We encourage people of all ages to join Expedition Nai as a much-needed respite from our current reality. We look forward to continuing to showcase the unique ways our community is coming together at this unprecedented time.”

Expedition Nai is powered by Camp Nai Nai Nai and Moishe House. Camp Nai Nai Nai is the ultimate Jewish summer camp for young adults, and the latest immersive experience that provides a new entry point to Jewish community life for Jews in their 20s and 30s. Moishe House provides vibrant Jewish community for young adults by supporting leaders in their 20s as they create meaningful home-based Jewish experiences for themselves and their peers. Learn more at expeditionnai.org and on Facebook.

They call me "NewsHound IV," because I'm a clever Finnegan, sniffing out stories all over the Boulder area. I love Jewish holidays because the food is GREAT, especially the brisket. Well all the food. I was a rescue pup and glad to be on the scent!
Previous What to Watch: Zooming in on the Best Jewish Documentaries
Next The Interactive Women’s Zoo