Bruce DeBoskey June 18, 2020 Guests and Blogs Comments Off on Philanthropy Can Spark Hope And Change

Discouragement, despair and anger are understandable and common responses to the current experiences of systemic racial injustice and bigotry, an advancing global pandemic and an economic train wreck.

Philanthropy, however, can offer a path forward. Philanthropy is inherently optimistic, reflecting the core belief that we can repair the world and have a positive impact on the lives of others and on intractable societal issues. Through philanthropy, we can make a difference by funding and inspiring change.

“Now is not the time for another review or another survey or another toothless effort to promote change. Now is the time to fundamentally decide whether we are prepared to do what is necessary by committing the resources in our control, make amends and begin building a just world.”

In addition to COVID-19 emergency funding, two issues that cry out for philanthropy’s focus right now are racism and the injustice that flows from it, and the ability to vote in the upcoming elections, in which Americans will elect local, state and national representatives. Those issues will impact the lives of millions of black Americans, as well as others who experience oppression, discrimination and inequity.

“As much as we hope to be better, hope alone has never proven a sufficient strategy for change any more than outrage over racial atrocities has effectively prevented future atrocities. Instead, adopting a generational commitment to advancing racial equity through collective action may engender real hope for many populations,” writes Marcus Walton, President & CEO of Grantmakers for Effective Organizations. He recommends that the philanthropic community focus on root causes, examine the data on the impact of race in America and exercise power by changing the rules.

“Philanthropy has been at the heart of major advancements in society for generations and will continue to play an important role long into the future, but only if we use the power, privilege and resources we are afforded to create meaningful, deep and transformative change that combats racism as its own deadly disease.”

— Kathleen Enright, CEO of the Council on Foundations.

Many nonprofits are working to advance racial justice and fight racism across the country.  Among them are: the Equal Justice Initiative, NAACP Legal Defense and Educational Fund, Black Lives Matter, NAACP, the Center for Policing Equity and Color of Change.

The right to vote is one of the most precious rights in our democracy – and it is under direct attack. In recent years, many states have made it harder for people to vote, adopting tactics such as stricter identification requirements, polling place closures, limits on voter registration and early voting, and purges of voter lists. National and state leaders are resisting the push for expanded mail-in voting – even in the face of the pandemic.

Most often, such tactics affect vulnerable populations and communities –

The causes of racial justice/fighting racism and voting are inextricably linked. Without the ability to vote for candidates who reflect our values and priorities, policies won’t be changed and the structural and systemic inequities in our society will remain.

Philanthropy can play an important role in helping to assure that all citizens – regardless of political affiliation – can make their voices heard in November’s elections.

“The vote is the most powerful, non-violent tool we have in a democratic society. The right to vote is precious and almost sacred, and one of the most important blessings of our democracy. Today we must be vigilant in protecting that blessing.”

Many 501c (3) nonprofit organizations are working to ensure the integrity of the upcoming fall elections. These include the State Infrastructure Fund, Rock the Vote, The Brennan Center for Justice, Fair Elections Center, Campaign Legal Center and the League of Women Voters Education Fund.

Donors in communities across the U.S. have an extraordinary opportunity – and responsibility – to address underlying inequities in our democracy.  Traditionally, foundations donate the required 5% of their roughly $1 trillion in collective assets to philanthropy each year, saving the remaining 95% for a “rainy day” or intending their grantmaking to continue in perpetuity.

Look out beyond your window—with the pandemic, racial injustice, and voting rights under attack…it’s raining!

This article first appeared in the Denver Post, 6/14/20. Re-posted here by the author with permission.

Bruce DeBoskey, J.D., is a Colorado-based philanthropic strategist working across the U.S. with The DeBoskey Group to help families, businesses and foundations design and implement thoughtful philanthropic strategies and actionable plans. He is a frequent keynote speaker at conferences and workshops on philanthropy. More information at deboskeygroup.com or @BDeBo.
@@BDeBo
Previous Weekly Edition: June 19th, 2020
Next The Paradox of Spirituality 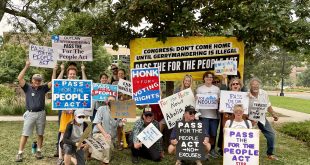