DENVER, CO, November 16, 2020 … The number of reported hate crimes in Colorado spiked by 74 percent between 2018 and 2019, marking the fourth increase in the past five years, according to the FBI’s annual hate crime report released today.

In Colorado, there were 210 reported hate crimes in 2019 compared to 121 reported incidents in 2018. The number is the highest recorded in the past 20 years. Hate crimes directed at individuals based on their race, sexual orientation, religion, gender identity and disability all increased in Colorado from 2018 to 2019, according to the report. The FBI documented 117 crimes based on race/ethnicity/ancestry, 47 based on sexual orientation, 36 based on religion, 7 based on disability and 5 based on gender-identity.

Nationally, the FBI’s annual Hate Crime Statistics Act (HCSA) report reveals that 2019 was the deadliest year on record with 51 hate crime murders – a 113-percent increase over the previous record of 24 set in 2018. Total hate crime incidents rose to 7,314 nationwide. Race-based hate crimes remained the most common type of hate crime (54%), as has been the case every year since the FBI began reporting hate crime data. After declining in 2018, religion-based hate crimes increased by 7 percent, with 63 percent of the total number of reported religion-based hate crimes directed at Jews and Jewish institutions. Anti-Hispanic hate crimes rose nearly 9 percent, the fourth straight year of escalating numbers. Hate crimes targeting individuals based on gender identity rose another 18 percent in 2019 after a 41 percent increase in 2018.

Hate Free Colorado, a diverse coalition of advocacy and civil rights organizations, said more must be done to address the disturbing trend of increased hate crimes and incidents in Colorado. The coalition was formed in 2017 to counter hate crimes in the state by educating the public about hate crimes and partnering with law enforcement to improve incident response and reporting.

Specifically, the coalition implores Congress to pass the Khalid Jabara and Heather Heyer National Opposition to Hate, Assault, and Threats to Equality (NO HATE) Act. By improving hate crime training, prevention, best practices, and data collection, the state and nation can stem hate crimes nationwide. The coalition will also continue to work with communities that are most frequently targeted with hate crimes to develop community-specific responses.

“It is no longer surprising or shocking to see an increase in the number of reported hate crimes in Colorado. At the same time, we cannot let fatigue distract us from the important work of preventing hate crimes. It is intolerable to note a whopping 74 percent increase in reported hate crimes and an increase against all targeted groups. Sadly, Jews and Jewish institutions continue to experience the greatest number of religion-based hate crime attacks in Colorado and across the country. Antisemitism is a virulent strain of hate that isn’t relegated to the history books. ADL will continue to do all it can to defend Jews and all victims of hate and bigotry.”

“In many ways it’s the worst of both worlds. Hate crimes continued their five-year rise and were more frequently violent, even at the same time that fewer law enforcement agencies managed to participate in voluntary reporting. Had more police and sheriff’s departments tracked and disclosed these crimes, I shudder to think how much higher the numbers would be.”

“Last year, we saw an alarming increase in reported hate crimes in Colorado and across the nation. Bias-motivated crimes are not just attacks on individual people—they are attacks on our communities and threaten the safety of our state overall. Our office is committed to supporting law enforcement agencies on improved hate crimes reporting and prosecution and continuing anti-bias training through our partnership with Hate Free Colorado.”

“As Denver District Attorney, I am concerned that the number of hate crimes is rising in Denver. Crimes of hate and racism undermine the security and health of our community. We will continue to prosecute these cases as aggressively as we did in the case of Ryan Lee who is currently serving a five-year sentence for a hate-based assault in Denver.”

“There has been an alarming increase in hate crimes in Colorado. This report is consistent with what we see on the ground. In 2018, the Boulder County District Attorney’s Office partnered with law enforcement, Out Boulder County, the Anti-Defamation League, and other community groups to launch a Hate Crimes Initiative because hate crimes cut against the very fabric of our nation. Colorado must rise above divisive rhetoric and acts of hate that we see far too often.”

“The Denver Police Department is committed to thoroughly investigating all bias-motivated crimes through their dedicated unit, which focuses specifically on hate crimes. Additionally, their team of officers conduct outreach to victims and communities which are affected by hate crimes, while providing resources and support during the healing process.”

“While Colorado is improving its consistency in reporting, the numbers of hate crimes and bias motivated incidents continues to rise to even more alarming rates. With over 8,800 survivors in our nation just last year, we must keep focus on not just illuminating the problem, but preventing targeted violence altogether. It is unacceptable to harm others simply due to race, religion, and ethnicity, and Hate Free Colorado stands in solidarity to spread awareness and support.”

“Since disability does not discriminate, Colorado Cross-Disability Coalition is very concerned about any hate crimes! We work daily to make Colorado a more equitable state for all to live, work, recreate, and enjoy life.”

“The 2019 Hate Crime Report is a stark reminder that Colorado is not immune to hate or to hateful rhetoric. Even as we saw an increase of almost 74% over 2018, the numbers are understated. Sadly, there are individuals, and groups, in our state that are doing needless harm to so many and wasting precious time and resources. Imagine the wealth we could generate for all Coloradans if we eliminated the negative energy and divisions, and instead came together as one human race, with a focus on taking care of each other, with compassion to ‘the other’, as is taught by our many traditions and religions. We would achieve peace and safety for all.”

“In addition to the disturbing trends outlined in the report, we note that nationally 34 transgender individuals were lost to anti-trans violence in 2020, the majority of whom are Black and Latinx. This epidemic of violence represents a rallying cry for BIPOC and LGBTQ communities and is the reason we continue to march in the streets demanding change. It is incumbent upon our local and state officials to make sure law enforcement agencies accurately report hate crimes. And it is paramount that LGBTQ individuals, and specifically transgender individuals of color, are treated with respect. Those who have been taken from us by violence must be remembered as vibrantly as they were in life and their identities must be reported accurately and with respect in police and media reports.”

“The year-over-year increase in hate crimes in our state is staggering and deeply unsettling. These data underscore the critical importance of working to dismantle systems of oppression and hate. We stand in solidarity with the victims of these heinous acts and unequivocally defend the worth and dignity of all persons regardless of race, religion, sex, sexual orientation, immigration or housing status, gender identity, or any other characteristic. We remain steadfast in our commitment to collective liberation, healing across difference, and a more just and equitable society for all.”

Previous A Story from Rivvy Neshama’s Award-Winning Book, “Recipes for a Sacred Life: True Stories and a Few Miracles”
Next Save the Date: Celebrate SIPP! Your Gifts at Work 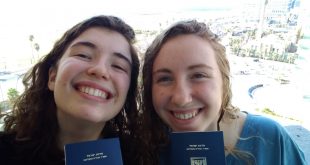