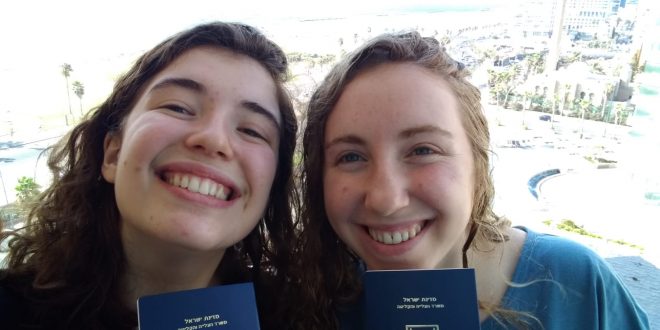 Staff September 21, 2020 News Comments Off on A Tale Of Two Journeys (To Israel, From Colorado)

On August 10, twin sisters Pearl and Heidi “Tamar” Clayman from Colorado decided to take the plunge and turn Israel from a favorite vacation destination to home sweet home.

At 18 most teenagers still don’t quite have yet a firm sense of self. Sure, they may know where they want to study as they enroll in university, but a clear sense of purpose and a future is usually still undefined. Not so for twin sisters, Heidi and Pearl Clayman, who are resolute in their latest life-changing decision. This summer, along with their parents, the two Denver natives decided to follow in their older sister’s footsteps, cross an ocean and make Israel their new home. Now in Israel, Heidi and Pearl are set to embark on two separate paths as they fulfill their Aliyah dream. The former hopes to enroll in national service (sherut leumi) after studying on a kibbutz, while the later has plans to enlist in the IDF. “[Settling down] anywhere else would feel lacking,” Pearl explained. The two 18-year olds discuss why they chose to make Aliyah with Nefesh B’Nefesh, their plans for their new life in the Holy Land and why Israel is simply the right place for them.

Pearl: My main motivation for making Aliyah is to be in the Jewish homeland – the place where we are meant to be. Here is where I want to establish my life and raise my family because doing so anywhere else would feel lacking.

Heidi: I decided to make Aliyah when I first visited Israel at 11 years old. Leaving Israel was painful, and it just got more painful as I continued to visit – and leave. Whenever I would visit Israel and then return back “home” to the US, something felt very wrong. After all, when I can go to Israel so very easily – something that could not be said for the past 2,000 years of our history – why would I leave? Why is Israel a vacation destination and not my home as it is meant to be? Why is the answer to that question “yes” now, when we have a state and it’s so much easier to live here as a Jew than it has been for the past two millennia? So I made Aliyah because Israel is the only home we have ever truly had. And I felt I was living a lie living anywhere else.

Your older sister made Aliyah several years ago. How did that decision influence you?

Pearl: Watching my older sister, Miriam, make Aliyah strongly influenced my own desire to follow in her footsteps. It planted the seed for my decision to do the same, and I really felt how powerful it was.

Heidi: The first time I came to Israel, I felt that feeling of coming home, of my soul being content. On that trip, my sister, Miriam, told us she was making Aliyah, so I thought, “Wow – that’s something you can do!”

I also remember later, on my trip to Israel with my class freshman year of high school, we were in Tzfat for Shabbat, and a siren blared when it was time to light the Shabbat candles. I just stood there amazed that there was a place in the world where one could live so fully and freely as a Jew that they could blast a siren to light your Shabbat candles. I thought to myself, “how could I live anywhere else?”

A lot of young people have a great time vacationing in Israel though. How did you know that coming here was more than just reliving a great holiday?

Heidi: I think it’s pretty hard to justify moving to Israel based on the yummy falafel, or nice bike lanes, or how you can float in the Dead Sea. When you move here, real sacrifices are made: it’s much easier to live and support yourself and your family in America and it’s even pretty easy to live a fully Jewish life. However, there’s one explanation for all the thousands of Jews returning home to Israel and the hundreds of thousands who long to return home: A soul as a Jew, and our collective soul as the Jewish people, is only complete in Israel.

What do you envision for your future in Israel?

Pearl: I plan to draft into the army, and then attend university.  I’m not positive what I want to study, but most likely something in science/math/engineering.

Heidi: I am going to study at Kibbutz Migdal Oz for one more year, and then I plan to do Sherut Leumi. Afterward, I want to study to become a midwife.

How do you feel about your family uprooting themselves during this uncertain COVID era?

Pearl: Honestly, everyone’s lives are pretty much up in the air anyway right now, so making this uncertain step now seems less crazy than it would when the world was ‘normal.’ The only downside was no Nefesh B’Nefesh welcome party at the airport.

Some olim complain about navigating a lot of red tape when they make Aliyah. What was your experience?

Pearl: Nefesh B’Nefesh has been super helpful with this process, making us feel like we’re not alone navigating a sea of bureaucracy. And all the more so during this time – it’s really good to know they have our backs and are looking out for us!

Heidi: It’s so amazing that making Aliyah has become so much more attainable; so many more Jews can come home, and not have to leave again, much in thanks to them.

They call me "NewsHound IV," because I'm a clever Finnegan, sniffing out stories all over the Boulder area. I love Jewish holidays because the food is GREAT, especially the brisket. Well all the food. I was a rescue pup and glad to be on the scent!
Previous Boulder JTree Hands-On Group Activity
Next Weekly Edition: September 25th, 2020 – G’mar chatima tova!