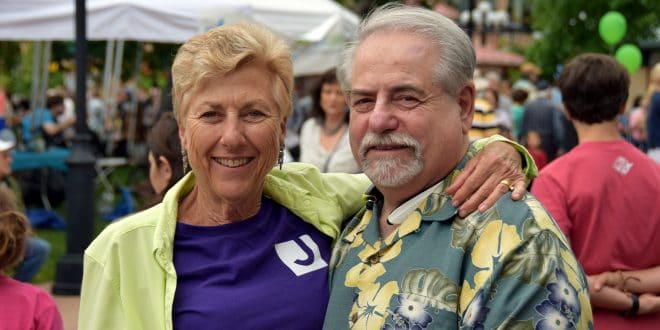 Kathryn Bernheimer and her spouse, Stan Kreis at the 2018 Boulder Jewish Festival

To celebrate and recognize Kathryn Bernheimer’s retirement from the Boulder Jewish Community Center’s ACE at the J, BJN sat down with her to talk about her career and her time in Boulder. Be sure to join her at her “Sweet 16: A Thank You and Retirement Dance Party” on Wednesday, September 11th.

For the last 16 years, Kathyrn Bernheimer has been at the nexus of arts, culture, Jewish and community here in her adopted hometown of Boulder, Colorado. What has enabled that fortuitous location was a unique combination of part-time jobs that perfectly fit her love of aesthetics and ideas, and scratched her simultaneous itches for writing, learning, and presenting — and running her own show.  But like most things in life, there were interim steps that unwittingly led her to be “in the right place at the right time.”

After growing up in an arts-filled family (more on that later), Kathryn found herself at the University of Colorado, Boulder, in 1976, to work on her Ph.D in Theater Arts, with the goal of being a university professor in that field.  But, like so many others that have been seduced by Boulder, it soon became more important to figure out how to stay rather than go, and so she walked into the Daily Camera and offered herself as an arts reporter.

For the next 16 years, she wrote about the arts in Boulder and Denver — and there was a lot to write about.  Theater reviews, film reviews, the opening of DCPA in Denver, festivals and performances at CU and around the metro area through the ’80s and early 90’s.  But when the internet arrived, she was one of the people that early saw the handwriting on the screen and what it would do to local papers, and started to look for her next big “thing”.

She wrote two books of film criticism (“The 50 Greatest Jewish Movies: A Critic’s Ranking of the Very Best“, 1998; and “The 50 Funniest Movies of All Time: A Critic’s Ranking“, 2000, both listed still on Amazon.com), and then happened to spend a couple of years as the Executive Director of Congregation Nevei Kodesh.  This stint, more or less single-handedly running a small non-profit organization with a board and not much else, was the training she would need to be successful running Menorah — the forerunner to ACE at the J.

That time at Nevei Kodesh taught her about budgets, accounting, interacting with a board of directors, working with volunteers to get things done, and how to organize events — the blocking and tackling of running a small business with few resources and lots of stakeholders.  So, when the leader of the newly-constituted Boulder Jewish Community Center, Linda Loewenstein, called Kathryn to have lunch in 2003, Kathryn was well-positioned for what would come next.

Linda, who was trying to get the Boulder JCC beyond just being a pre-school and attracting more of the Jewish community into a Community Center, had applied for a grant for a half-time program director.  At the same time, she told Kathryn that Menorah, a small, independent Boulder Jewish adult education organization, was also looking for a half-time executive director, and that the two together would be a great full-time job.  A star was born, a nexus achieved.

It was beshert in every sense.  Kathryn’s mission was to program basically for her own demographic: curious Jewish adults 50 and up.  And she knew her crowd!  Research being done at that time (early 2000’s) proved out her model that arts and culture make people more connected to the Jewish community, and for non-Jews, arts and culture provides education in a non-threatening way that shows that Jews are just people too.

It was all about “engaging community:” audiences, volunteers, presenters.  Volunteers for one program are audiences for another;  presenters and performers came from the community as well as from out of town.  There were lectures from CU professors, “Jews of <fill in the blank>” theme nights at the JCC, author talks during Book Festival.  And those bi-annual fundraisers! Dinner dances, brunches, all fun-raisers as well as fundraisers. Menorah was also the fiscal sponsor for the Boulder Jewish Festival, the ultimate Boulder event for Jewish arts, culture, organizations and food, and she reveled in the role of MC and working with the committee to put on the best possible program.

It was inevitable that there would be a film festival.  With Kathryn’s background in film plus her drive to curate and engage and present, it was really no surprise that the Boulder Jewish Film Festival would be born.  It was only lacking a venue… until the Dairy Arts Center created the Boe.  Then Kathryn finally had a venue worthy of her vision, and since 2013, the annual Boulder Jewish Film Festival has been a growing success, even adding the JCC itself as one of the venues once Levin Hall was a reality.

Really none of this would be a surprise to those who knew the family that Kathryn came from.  Her parents were Holocaust survivors from Germany, her father a member of the Bernheimer family that had created, in 1860, what would become the largest antique/arts business in Europe, with branches in the best cities. After spending time in Dachau after Kristallnacht, most of the family got out of Germany in 1939, scattering to Cuba, Venezuela, and her parents got to the United States.

Kathryn’s father opened a gallery in Harvard Square, and her uncle returned to Munich after the war and re-opened Bernheimer’s with stock that had been hidden from the Nazis in a convent during the war.  Her cousin ran the business for 30 years, and then moved to London and now runs the oldest Old Master gallery there.  Another cousin on her mother’s side was for many years the curator of the Louvre.

Her time at the Camera trained her for ACE in another way — she was covering trends in the arts and culture, and it gave her the opportunity to mix things she was interested in with things the community was interested in — providing just the sort of mutual educational opportunities she has specialized in over the years at Menorah and then ACE.

“I am someone who is in love with aesthetics and ideas.”

That is the perfect description of her job.

“Working at ACE is the perfect combination of the arts and content. What do the arts mean? What do they teach us? What do they tell us? It has been a wonderful opportunity to explore ideas, and aesthetics, so it’s everything that I’m passionate about.”

Kathryn is really aligned with the JCC’s mission “to provide programs and services based in Jewish values and traditions in a place where people of all ages and backgrounds gather to connect, exchange ideas, learn, and grow together.” Kathryn’s programs are not “arts for arts’ sake,” rather she always strives for excellence, and is focused on “How will the audience feel after the program?” Has there been impact, meaning, relevance, connection?  “We care about how the audience feels because that’s why we’re doing it — so we can learn, and we can grow, and we can connect and we can engage and we can foster understanding.”  She has always asked three questions before each program decision: Will it be excellent? Why am I doing this? And,  Who is it for?

“The role of the JCC is so important in the community because what diversity looks like in Boulder is not typically what we think of when we hear the word diversity. The politically correct version doesn’t work: it’s not ‘how many latinos are on your board.’ That’s not relevant.  What’s relevant is, are we engaging the Buddhists, are we dealing with Black and Jewish connections, are we a place where people come to learn about other cultures and the intersection of cultures, so that we can all feel more tolerant of others.  Is it about interfaith dialog, the disabled, the unaffiliated?  We love having people come in from all over the world, from different cultures and traditions.  There are so many people in Boulder from different parts of the world, we create a climate of acceptance, of diversity, foster conversations among them.  It’s about who is actually here, because our diversity looks different. The JCC creates a climate of acceptance of diversity in all forms.  Not just racial diversity, it’s a bigger and more complex picture. Bringing diverse people together.  Age diversity, gender diversity, differently abled, religious diversity.”

As much as the work gratified her, Kathryn also said that her job is also all about relationships, and she has had fabulous relationships in her job and as a result of it. And as independent as Kathryn is, she feels she’s had tremendous support from the JCC, Linda Loewenstein and the current Executive Director, Jonathan Lev.  “I always got the right level of attention from Jonathan – as supervisor and a partner, never a boss.”

“At the end of the day, I just have to feel very gratified by how the programming enriches lives, builds community, and contributes to the vibrancy of the arts and culture in Boulder.”

But, as is typical for Kathryn, we are not quite yet at the end of the day. Although retired from ACE at the J, Kathryn will continue in her role as Founding Executive Director of the Boulder Jewish Film Festival. And she is already deep into planning for the 8th iteration in March, 2020 (sponsorships and tributes available!).

Thank you for 16 years of excellence, Kathryn, and we look forward to many more years of the Boulder Jewish Film Festival.

I've been writing things since grammar school, and served as a writer, photographer and/or an editor on my junior high and high school newspapers; the Daily Trojan at USC (where I earned my journalism degree); the student newspaper at the Anderson School at UCLA (where I earned my MBA); and written and edited countless business documents and presentations in the ensuing twenty years. I've been involved Jewishly since my bris and in Boulder since 1995. I'm married to my Executive Director Cheryl, and we have two children, Lauren and Ethan.
Previous Noah Says” No!” to Complaining on Shabbat
Next Join Local Teen, Macy Miller, and BJTI to Increase Awareness of Genocide Worldwide 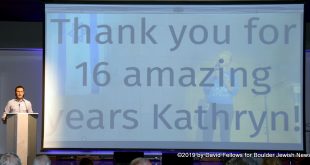 A Fond and Fun Farewell Party at the J

You’re Invited to Kathryn’s Sweet 16: A Thank You and Retirement Dance Party 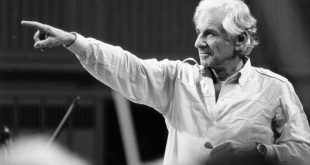