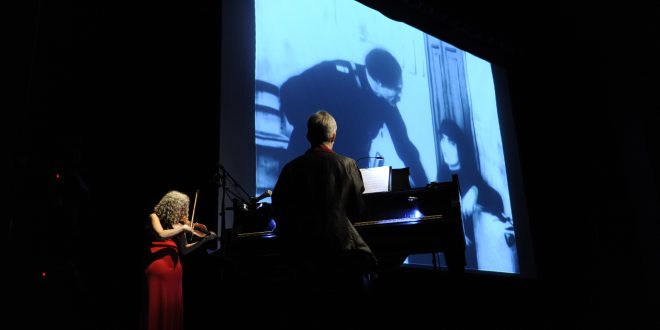 August 31, 2017 – The University of Colorado Boulder and the Dairy Arts Center are pleased to present a screening of a rare 1918 silent film, “The Yellow Ticket,” accompanied by an original film score composed and performed live by klezmer violinist Alicia Svigals with jazz pianist Marilyn Lerner. The screening, which is part of the CU at the Dairy series, will take place on Friday, September 15 at 8:00 pm at the Dairy Arts Center, 2590 Walnut Street, Boulder, Colorado. It will be followed by a panel discussion with the performers and CU Boulder faculty members.

“The Yellow Ticket” tells the story of a young Jewish woman from a Polish shtetl who is forced by anti-Semitic laws and customs to lead a double life in a brothel while attempting to study medicine in Tsarist Russia. The film, which was made at the end of World War I on the eve of the Russian revolution, also includes precious footage of the former Jewish quarter of Warsaw and the people who once lived there. Notably, it stars an adolescent Pola Negri, who would later become the legendary femme fatale of the silent era.

The film will be accompanied by an original film score composed and performed live by Alicia Svigals, the world’s foremost klezmer fiddler, with Marilyn Lerner, Toronto’s virtuoso new-music pianist. Svigals is a violinist and composer who co-founded the Grammy-winning band The Klezmatics and was a 2014 NEA MacDowell Fellow in composition. Lerner, a jazz pianist, has garnered recognition including Best Western Jazz Recording 2004 and the Montreal International Jazz Festival award for Best Composition. Together they perform this multimedia event across college campuses and festivals.

To view a trailer for the film and purchase tickets, please visit tickets.thedairy.org.