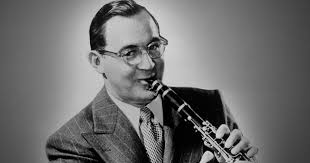 The Magic of Benny Goodman: The Pete & Will Anderson Trio

Benny Goodman was born in Chicago, the ninth of twelve children of poor Jewish immigrants from Russia who lived in the Maxwell Street neighborhood. His father, David Goodman, was a tailor from Warsaw, his mother, Dora Rezinski, was from Kaunas. His parents met in Baltimore, Maryland and moved to Chicago before Benny was born.  Benny said of his father (who kept kosher) “Pop worked in the stockyards, shoveling pig lard in its unrefined state. He had those boots, and he’d come home at the end of the day exhausted, stinking to high heaven, and when he walked in it made me sick. I couldn’t stand it. I couldn’t stand the idea of Pop every day standing in that stuff, shoveling it around”.

When Benny was 10, his father signed Benny and two older brothers up for music lessons at the Kehelah Jacob Synagogue. The next year he joined the boys club band at Jane Addams’s Hull House, where he received lessons from the director James Sylvester. Also important during this period were his two years of instruction from the classically trained clarinetist Franz Schoepp, who had a long-lasting influence on Benny. Not only did Schoepp he teach Benny and other Jewish children, he also taught African American students, something which was uncommon in Chicago. His indifference to race had a profound effect on Benny, who later crossed many racial boundaries in the 1930s, hiring African American Jazz and Swing musicians such as Teddy Wilson and Lionel Hampton. Teddy Wilson’s 1936 appearance as part of the Benny Goodman Trio is considered the first time a band of white and black musicians played a live performance together. The fame of Benny Goodman’s Band helped to destigmatize integrated musical groups. As Benny Goodman once said, “If a guy’s got it, let him give it. I’m selling music, not prejudice.”

His early influences were New Orleans jazz clarinetists working in Chicago, notably Johnny Dodds, Leon Roppolo, and Jimmy Noone. Goodman learned quickly and became a strong player at an early age. He was soon playing professionally while still ‘in short pants, playing clarinet in various bands. When Goodman was 16, he joined one of Chicago’s top bands, the Ben Pollack Orchestra, with which he made his first recordings in 1926. He made his first record under his own name two years later. Remaining with Pollack through 1929, Goodman recorded with both the regular Pollack band as well as smaller groups drawn from the orchestra.  The side sessions produced scores of often hot sides recorded for the various dime-store record labels under a bewildering array of group names, such as Mills’ Musical Clowns, Goody’s Good Timers, The Hotsy Totsy Gang, Jimmy Backen’s Toe Ticklers and Kentucky Grasshoppers.

By his early twenties, Benny Goodman had become a national icon of the Jazz age and his musical style ushered in a new era of music: big-band swing. His name become so synonymous with the musical style of swing that he earned the nickname “The King of Swing.”

The Pete & Will Anderson Trio Direct from New York, Peter and Will Anderson are among the finest clarinet and saxophone players on today’s jazz scene. Hailed by the New York Times as “virtuosos” and trained at the Juilliard School, Peter and Will have performed with the Jimmy Heath Big Band, Lincoln Center Jazz Orchestra, Village Vanguard Orchestra, Kenny Barron, Paquito D’Rivera, Cecile McLorin Salvant, Bob Wilber, Albert “Tootie” Heath, Lou Donaldson and many others.

Previous Festival with Heart Provided Nourishment for the Soul – and Food for Thought
Next New Report: Campus Anti-Semitism Increased 40% in 2016, Genocidal Expression Doubled