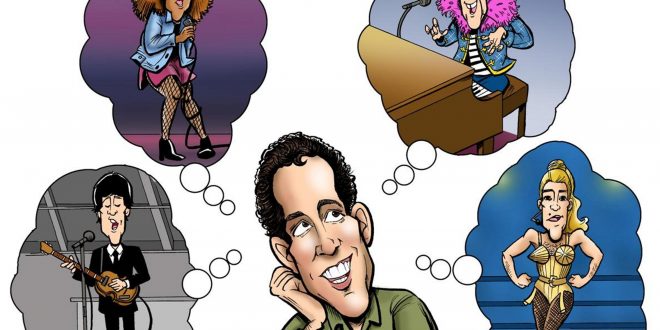 Comedy Central and National Lampoon star Tommy Koenig’s one man show is the story of one Jewish Baby Boomer’s journey from childhood to mid-life as seen thru the lens of the music that was the soundtrack of his life. Baby Boomer Baby opens at Boulder’s Dairy Arts Center on June 30 and runs through July 23.

Koenig, described by the New York Times as “a master of caricature” and “a major talent” tells his story from a distinctly Baby Boomer perspective.  Called “wildly entertaining, touching, and very, very funny,” Koenig was born in Brooklyn, New York, in 1953, the same year Rock and Roll was born.

Raised in Rockaway Beach, the son of a musician who played with Glenn Miller during World War II, Koenig was greatly influenced by chance meetings with John F. Kennedy and later George Carlin, and mostly by what the Beatles brought – the influence of music on Boomers’ culture and personal choices.

In Baby Boomer Baby Koenig recounts the years he struggled to keep up with the changing times, just missing Woodstock by a few miles; the rites of passage of college, travel, sex and drugs; and the ever-changing cultural and political landscape that music unleashed as it morphed from Disco to Punk to MTV to Rap and beyond.

During the show, Koenig channels dozens of well-known – and original – characters in a one man tour de force spanning seven decades. With original songs and parodies of everyone from The Beatles to Lady Gaga, and from Doo Wop to Hip Hop, Koenig’s impressions include Elton John, Billy Joel, Blondie, Prince, Tina Turner, Bruce Springsteen, The Bee Gees and the Eagles, among others.

“Baby Boomer Baby is the culmination and combination of my work in theatre, stand-up comedy, music and art,” Koenig explains. “I get to do it all in this one show. Most of my career I have done all these things separately. I have been an actor since I graduated college (State University of New York (SUNY) Buffalo); a stand-up comedian since the early wave of comedy clubs that spread across the country; a sketch player as well as writer with National Lampoon (If We’re Late Start Without Us  on tour and Class of ’86 Off Broadway and filmed for Showtime); a musical parodist who opened for headliners such as Bonnie Raitt and Joan Jett; co-writer with musicians like Bernie Worrell of The Talking Heads and P Funk; and an artist with many commissions and sales of my ‘Paintings in 3D’ series. In Baby Boomer Baby I get to bring all this into play.”

“It was the first time I had done a show alone but with an ensemble of characters, some of which still appear in Baby Boomer Baby – I’ve learned that some routines take years to be perfected and evolved,” he explains. “As George Carlin said ‘After 35 years of doing this I’m finally starting to figure some of this shit out’”.

“It was when I was invited to be an Artist in Residence at The Santa Barbara Theatre in Puerto Vallarta, Mexico in 2009 that the idea for the show really began. For years I’d wanted to do a show called Baby Boomer Baby, telling my personal story and the story of my generation through the rock and roll music that influenced Boomers just like me.

“I realized although the nostalgia machine was finally getting to our generation with shows like Beatlemania and Beautiful, there wasn’t a show that told the whole story of what it was like to be a Baby Boomer growing up through the decades. I felt that the musical impressions and characters would be entertaining – but what surprises me most is how my story is resonating with the audiences and how they’re really embracing it and the message in it – a return to Peace, Love and Understanding – which is also very rare these days. And there’s nothing better than having a fellow graying Boomer rush back down the aisle and exclaim ‘That was ME!!’ Seeing that audiences of every age who attend the show are ‘getting it’ is a revelation and inspires me to keep doing this show.”

Koenig’s first one-man show, The Living Experiment, began in 1987 and ran through 1992 with extended runs in New York and Los Angeles.

Koenig has appeared in movies (Mel Brooks’ Dracula: Dead and Loving It, and Robin Hood: Men in Tights) and on television (Boston Legal, Miami Vice, Not Necessarily the News). He was featured on NBC’s Don Kirshner’s Rock Concert, appearing with David Bowie and Rick James. Around the country in various arenas he opened for artists as varied as Warren Zevon, Alvin Lee, Dave Mason and Los Lobos.  Koenig teaches Stand Up Comedy at the Comics Studio in New York.  One of his students, Brad Zimmerman, just completed a 15-month run off Broadway of My Son The Waiter: A Jewish Tragedy and is also headed to Boulder in the near future.

They call me "NewsHound IV," because I'm a clever Finnegan, sniffing out stories all over the Boulder area. I love Jewish holidays because the food is GREAT, especially the brisket. Well all the food. I was a rescue pup and glad to be on the scent!
Previous ParshaNut – The Genesis of Jewish Culture: Parashat Chukat
Next Inaugural Camp Adventure Rabbi Runs July 17-July 21