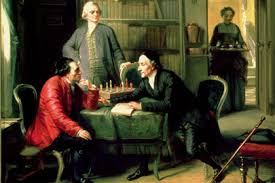 What causes a renaissance? Why do certain periods in history seem to be erupting with cultural productivity, while others are relatively quiet? Where does a golden age begin?

In Chapter 21 of the Book of Numbers, after forty years of desert wandering, we suddenly detect the stirrings of a cultural awakening. We are only given snippets, just the slightest clues of what might be going on, and none of them are easy to decipher. Yet we can identify, in this one chapter, the birth of at least three distinct forms of literary expression.

First, there is a new book. The Torah has referred to itself as a ‘book,’ of course, already in its fifth chapter (“This is the book of the generations of humanity..”, Gen 5:1) But this appears to be something else. After mentioning that the Israelites’ passage through a region called the ‘Arnon’ took them between the territories of two of their enemies, the Torah states:

That is why the Book of the Wars of the Lord speaks of, “Waheb in Suphah, and the wadis of the Arnon.” (Numbers 21:14)

What is this Book of the Wars of the Lord? No one really knows, but the Ibn Ezra tells us that it was a book “distinct from the Torah.” Nachmanides imagines it belonging to a particular genre of writing, characteristic of the time:

In those generations, wise men would write stories of the great battles.

So we presume that the book is some record of military history. Its exact purpose is unknown, and we only hear a fragment of its content (which the commentators struggle mightily to make some sense of). But one way or another, we see that books are being produced. Writing is now not only the province of Moses, and not only used to record the word of God. The people have taken up the quill and begun to document their lives.

Read more of this week’s ParshaNut at Kevah.org.

Find out why our members are saying that being part of a Kevah Group feels like “I am watering the plant!”