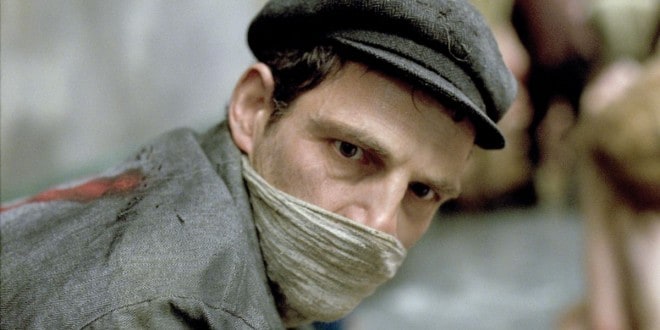 Purim and “Son of Saul”

Maybe it was his name that gave me the link. And maybe it was the proximity of seeing “Son of Saul” at the Boulder Jewish Film Festival on the week after the Haftarah of Parshat Zachor about the story of King Saul and his tragic fall at the battle of Amalek. Or maybe it was reading a review even before knowing that the movie would win the Academy Award for best foreign film – a review calling it one of the greatest films ever made. Or finally maybe it was the amazing prophecy in the book of Esther linking the sons of Haman to the ten Nazis who were hung at the Nuremberg trials. (Please google for details if you are unfamiliar with that connection.)

Whatever the trigger, when I saw Saul finally smile at the end of the most relentlessly nightmarish film I have ever seen, I couldn’t help having a Purim association. Some reviewers and comments considered the film’s ending to be artificial and tacky and a betrayal of the unremitting gloom of the movie. But I saw the smile differently. I referred to it in brief at the talkback after the film. People had a great variety of opinions as to the significance of the smile, and the appearance at the conclusion of a child that may or may not have been his son, or may or may not have been real. But I kept thinking of the back story of the original Saul, the first king of Israel and the one who was dethroned because he refused to kill Agag.

In the book of Samuel, as the sages elaborate, after the battle, Agag runs away for a night and impregnates a woman who becomes the future ancestor of Haman. When Agag is captured the next day, he is killed by Samuel but goes to his death smiling because he is sure that his evil legacy will continue on, since a possible descendant now remains. On the other hand, the mission to abolish the nation who wants to eliminate both G-d and the Jews from existence also continues, and the protagonists are none other than Mordechai and Esther, direct descendants of Saul’s family. This mission is the reason behind Mordechai’s words to Esther, ‘If you are silent at this time, you and your house will perish…and who knows if not for such a time as this, have you become royalty!’ In other words, this is your family’s designated task, so even if someone else should do the job, you will have lost your chance to complete ‘unfinished business.’ So Esther and Mordechai, against all odds, manage to have Haman and his sons hung on the gallows that he prepared for Mordechai.

Thus to me the smile at the end of the fictional but true to life film reminds me on one hand, of the smile of the maniacal smile of the Nazis who thought they would succeed in the final solution. On the other hand, it seems much closer to the smile of a king Saul who even after he was so desperate as to consult with the witch of Endor, and who fell on his sword at his last battle because otherwise he would face torture and disgrace at the hands of the Philistines, was still able to smile knowing that the Jewish people were promised to have a ‘saving remnant,’ even if it were a single survivor.

Knowing that we are ongoing bearers of a legacy to carry a message of hope and peace and justice to a broken world, can and should elicit from us a smile that is not artificially tacked on to a history riddled with suffering, but on the contrary is its raison d’etre. As Dustin Hoffman so eloquently put it at a recent interview when he found out that his What else can our comeback be but a groundswell of trust, that sometimes apparently insane faith is the most appropriate response in a world gone mad?

May our unreasonable and stubborn happiness carry us through this Purim to see the fulfillment of the verse from the Megillah, that we say every week as Shabbat departs…’The Jews had light, happiness, joy and value,’ so may it be for us and all humanity speedily in our days!

I have been teaching Torah and Chassidic writings for over forty years to students of all ages and backgrounds, both on the East Coast and the Midwest. I have been a director of several Jewish organizations in Santa Fe and Colorado. My articles and poetry on a wide variety of Jewish topics have been printed in many publications, and also are available online.
Previous Purim Challenge – Are You In?
Next As Housing Demands Increase, JNF Helps Communities Grow 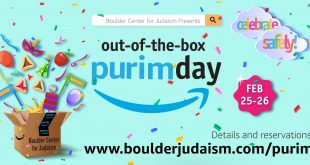 Purim Out Of the Box 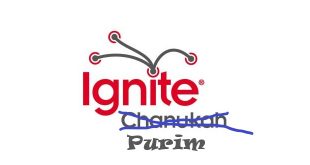 Ignite is Back for Purim! 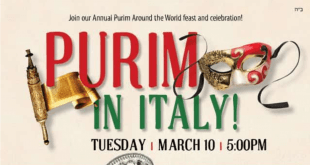 We are proud to be part of Clean Speech Colorado, Volume 3: Oseh Shalom | Words of Peace. Join thousands of your Colorado neighbors this November to learn more about Shalom and make your world a more peaceful place.