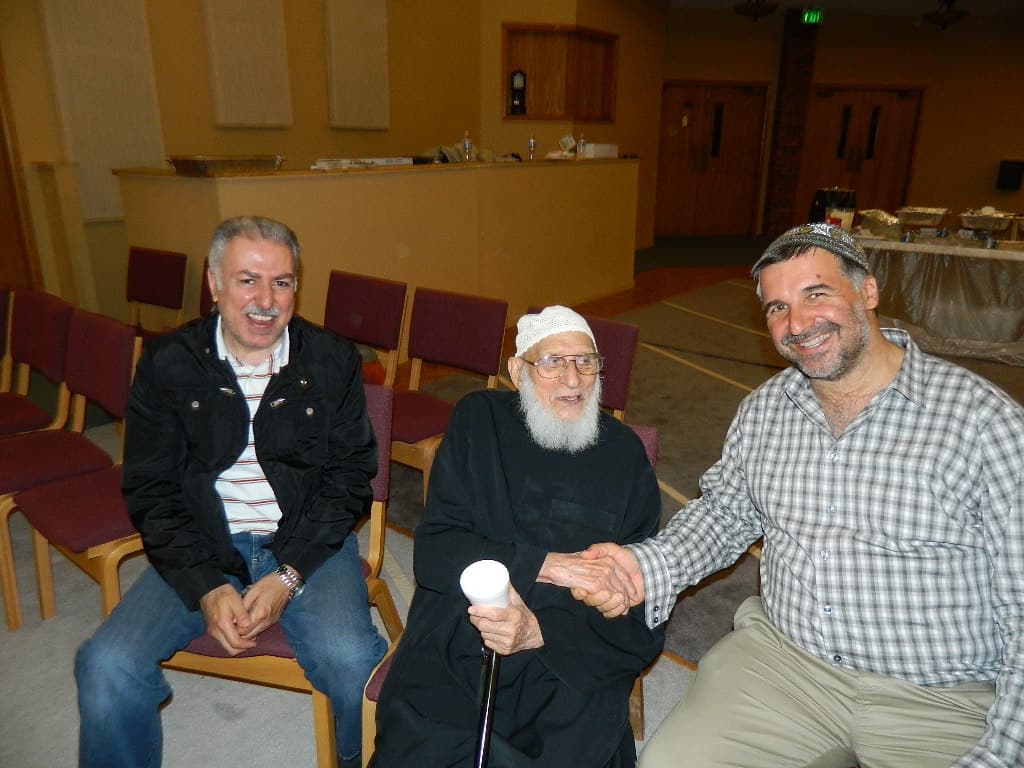 July 15th was a fast day on both the Muslim and the Jewish calendars.  Muslims throughout the world are celebrating the holy month of Ramadan, and the Jewish community began its three week period of mourning that culminates with Tisha b’Av, which commemorates the destruction of the First and Second temples.

The first day of this period, the 17th of Tammuz, is a minor fast day from dawn to dark, like the daily Ramadan fasts.  This conjunction of fast days inspired many people across the world to get together, to fast for peace and non-violence and to break the fast together in solidarity and friendship.  Israelis and Palestinians broke bread together in the very troubled West Bank, a large Jewish Muslim celebration happened in our nation’s capital and even in Boulder, Colorado, we challenged the paradigm of hatred and violence with one of love and reconciliation.

Some of us had been talking about trying to get together in Boulder for a little while and, in the end, it all came together just the day before with a couple of conversations with members of Boulder’s Islamic Center.  I spoke to Eddie, originally from Lebanon and to Hadi, from India.  They were both so incredibly warm and open to the idea of a group of Jews joining them for the Iftar (break-fast).  They were fairly insistent that as their guests, we were not to bring our own food, but we agreed that if some of us showed up early we could bring some food for us to share.  About 20 men and women from across the Jewish community joined this gathering, including Rabbi Tirzah Firestone and Eve Ilsen, Rebbetzin of our late, beloved Reb Zalman, who was smiling down on this sisterhood and brotherhood at the heart of our being together.  We dressed appropriately, including full hair covering for the women, we took off our shoes and entered the place of prayer and community. All of us were struck so deeply by the authentic warmth of the welcome, genuinely feeling as if we were having a reunion with long lost cousins.  What a blessing!  In the words of Eddie Jamell, one of our hosts, “as Allah is my witness, when I first saw you and talked to you tonight, my heart was filled with joy and happiness as much as the first time I went to Lebanon and had the pleasure of meeting my family for the first time.”

We sat on the floor as one of the Muslim brothers chanted some opening prayers, which indicated the end of the fast and we ate dates, drank milk and juice as we got to know each other.  Over thirty nationalities are represented in this community, including Palestinian, Turkish, Pakistani, Egyptian, Indian, Bangladeshi, Lebanese and others. Some of the women later told us about a sister from Gaza whose family was trying to get out of there.  We shared stories and learned about each other’s customs and beliefs.  After this initial, simple break fast, the Magrib prayer began, the evening prayer whose Arabic root is identical to Maariv, our evening prayer.  Just one of so many ways in which we share a common heritage.  Some of our group joined in the Muslim prayers, bowing down to the One God, Allah, just as we do.  Others stayed at the back and silently prayed along with words of the Hebrew Maariv, the echad of the Shema joining with the akbar of Allah hu Akbar. God is One. God is Great. We are one. After these prayers, I was invited to share a few words and I spoke of the fact that all over the world Muslims and Jews are gathering like this to challenge the notion that our relationship is being defined by hatred and violence and to start a new chapter of friendship and brotherhood.  I expressed hope that this would be the first of many such gatherings and invited the community to join ours and gratitude for the open-hearted hospitality. 94 year old Sheikh Jalil Khan who lives in Louisville was not originally planning to come for Iftar that night, but when he heard that there were going to be members of the Jewish community present, he insisted on coming, and he spoke right after me.  The Sheikh spoke movingly of being in right relationship with the one God, regardless of whether we are Jews, Muslims or Christians, acknowledging Moses as a true and important prophet.  He seemed so pleased that we were there. After these short speeches, we moved to the meal and feasted on bread, salad, falafel, humous and, some of us, partook of the Halal meat.  Over dinner, the conversations flowed and the connections grew and deepened.  There was an excitement in the room about these new friendships that were emerging and eager anticipation about what will happen next.  Members of the Mosque made it very clear that anyone from our community was welcome any time for Iftar during Ramadan and we talked of other ways to get together.

Some of the community said they wanted to come and experience a Shabbat morning service, especially when I said that my sermons were less than fifteen minutes.  Usually.  I did warn them that our services are almost 3 hours long, but they seemed unphased and we look forward to welcoming them soon. During shiva for Reb Zalman, it was mentioned several times that he used to say, “the only way to get it together is together!”  Those of us blessed with this experience in the Islamic Center felt the
power of this reality.  Inshallah, God willing, b’ezrat hashem, new relationships with old cousins are heralding a dawn of a new beginning of hope.

Marc is a native of London, England where he was an actor and practitioner of complimentary medicine before training as a rabbi in London, Jerusalem and Los Angeles. He was ordained at the Ziegler School of Rabbinical Studies at the American Jewish University in 2004 and has been the the spiritual leader at Bonai Shalom in Boulder ever since. Marc was a close student of Rabbi Zalman Schechter Shalomi and received an additional smicha (rabbinic ordination) from him in 2014, just two months before he died. He has been the host and narrator of two documentary films shown on PBS; A Fire in the Forest: In Search of the Baal Shem Tov and Treasure under the Bridge: Pilgrimage to the Hasidic Masters of Ukraine. Marc is a graduate of the Institute of Jewish Spirituality, a fellow of Rabbis Without Borders, has traveled to Ghana in a rabbinic delegation with American Jewish World Service and co-chair of the Rabbinical Council and national board member of Hazon, which strives to create more sustainable Jewish communities. In 2015, Marc was among a group of 12 faith leaders honored at The White House as “Champions of Change” for work on the climate. Marc is a proud member of Beit Izim, Boulder’s Jewish goat milking co-op.
Previous Israel Solidarity Rally: The Speech I Didn’t Give
Next Haver, Boulders’ Rabbis, United on Circumcision