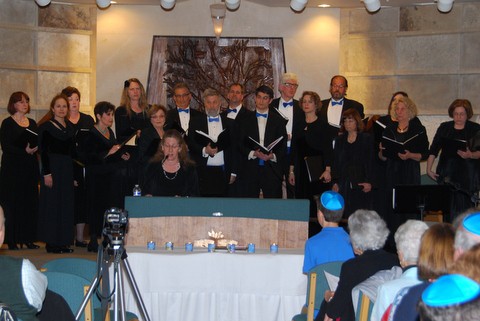 A seventh candle was lit by another survivor from the audience while all the other b’nai mitzvah students in attendance stood.

The Colorado Hebrew Chorale then performed two pieces, “Enosh” and “Unter Dayne Vayse Shtern.” A member of the Chorale, Estelle Nadel, then stepped to the podium and riveted the audience with her testimony of hiding, starting when she was 7 1/2 years old, with her older brothers in and around their Polish village during the German occupation. The testimony included a close call when she and one of her brothers were caught by the Gestapo and scheduled to be shot the next morning, and Estelle described their escape when a sympathetic Polish policeman had them confined in a basement cell — whose window, while widely barred, did not have any glass.  The pair were able to escape through the bars into the pitch black night and find their way to another family member’s hiding place.

The Chorale then finished with three more pieces, “Zog Nit Keynmol”, an anthem sung by Polish Jewish Resistance fighters; “Zol Shoyn Kumen Di Ge’ulah”, a Yiddish song that featured Estelle Nadel as soloist; and “Ani Ma’amin”, a Hebrew song based on the “13 Principles of Faith” of Maimonides and sung to a tune composed by a Chasidic Jew while in a cattle car on the way to Auschwitz.  The song was said to have been sung by the Chasids during the rest of the journey and only went silent in the gas chambers themselves.  The piece was accompanied by Elizabeth Kirk on violin and was narrated by Abby Bloomfield.
Rabbi Marc Soloway followed the Chorale chanting El Malei Rachamim, and the room fell silent for one minute.  Finally, Rabbi Hannah Laner led the assembled in a special Holocaust Kaddish that included the names of many camps and ghettos.

More photos from the service:

I've been writing things since grammar school, and served as a writer, photographer and/or an editor on my junior high and high school newspapers; the Daily Trojan at USC (where I earned my journalism degree); the student newspaper at the Anderson School at UCLA (where I earned my MBA); and written and edited countless business documents and presentations in the ensuing twenty years. I've been involved Jewishly since my bris and in Boulder since 1995. I'm married to my Executive Director Cheryl, and we have two children, Lauren and Ethan.
Previous Blessing of the Blossom
Next Jewish Farm Updates and Community Visioning