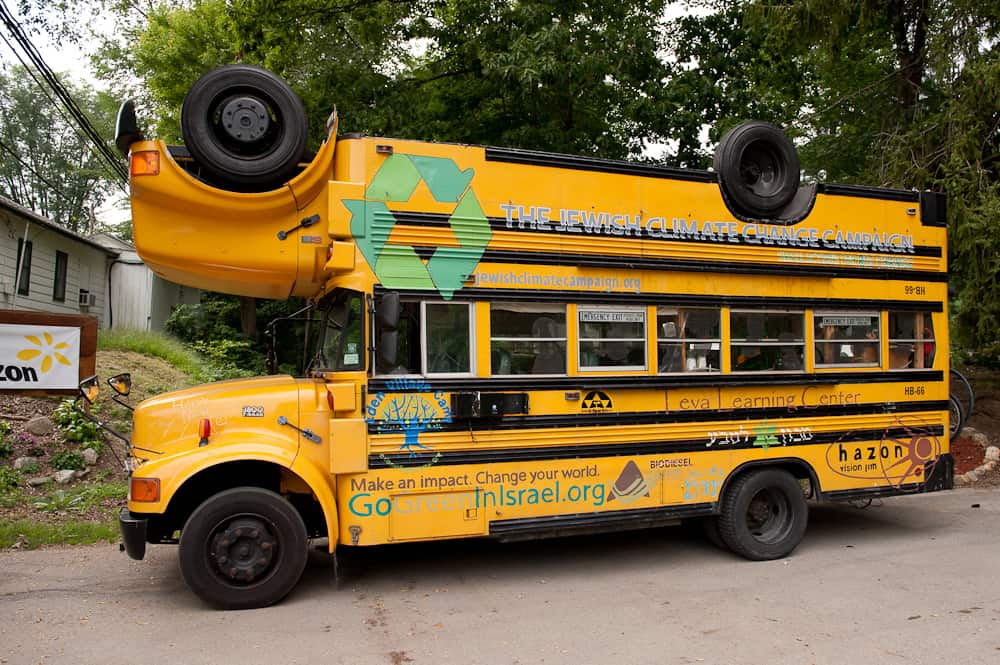 The Topsy Turvy Bus, which is launching its summer tour at the Hazon Food Festival.

When the first Jewish Film Festival debuted in San Francisco in 1980, no one had ever heard of a Jewish film festival, let alone imagined that it would become a staple of Jewish culture across the United States. But today every major – and many minor – Jewish communities have Jewish Film Festivals that have become a significant part of the annual life of the community.

Next up: Jewish Food Festivals!

One Food Festival participant shared, “The Hazon Food Festival – part Jewish communal experience; part foray into local, organic food; part intellectual discourse on our relationship with food and the environment…it is one place where my life, and my Jewish life, become one.”

The Topsy Turvy Bus will be launching its summer tour from the Food Festival! It is an inverted bus frame on top of a bus, originally donated by Ben Cohen of Ben and Jerry’s ice cream, which Teva converted to run on used vegetable oil.  It’s traveling around the country running Jewish Environmental programming focusing on shmita and designing sustainable systems.

There will be rich and varied activities, including D.I.Y. projects, panel discussions, a hummus contest, silent auction, foodie marketplace, and cooking demos. There is an optional free breakfast on Ekar Farm from 8:30 – 9:30 a.m. where you can learn about Jewish values and food justice and gets your hands in the dirt, harvesting for local food banks.

The Hazon Food Festival is great for all ages. Free registration is available through Mazel Tot for families with children prenatal through age 4.

For information and to register, visit hazon.org/food-festival-colorado

Hazon is America's largest Jewish environmental organization. We create healthier and more sustainable communities in the Jewish world and beyond. Hazon in Colorado is led by Becky O'Brien, Boulder Director and Sarah Kornhauser, Denver Director.
Previous Musical Shabbat Welcomes Bonai Shalom Back Home
Next Special Prayer Services in the Merit of Kidnapped Teens