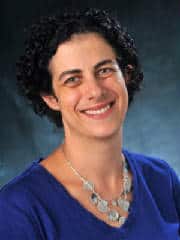 Side By Side: Learning about the Middle East in a New Way Usually, people grow up learning only one side of a complex story about the Middle East. For both American and Israel Jews, that often involves learning a grand narrative about Zionism and Jewish successes in ‘making the desert bloom.’ For Palestinians, that usually involves stories of expulsion, exile, homelessness, and the yearning for a state. Recently, Israeli Jews and Palestinians have grappled with new ways of telling each other’s stories, to each other, side by side. This is no easy task, and it challenges learners to expand their awareness, empathy, and ways of understanding and telling history.

Professor Caryn Aviv is a Senior Instructor in secular Jewish society and civilization at CU Boulder’s Program in Jewish Studies. She earned her PhD in sociology and anthropology at Loyola University, Chicago. Aviv, along with David Shneer, is the co-author of “New Jews: The End of the Jewish Diaspora,” “American Queer: Now and Then” and co-editor of the anthology “Queer Jews.” She conducts research on and teaches in the areas of gender, sexuality, Zionism, Israel and contemporary Jewish cultures and was formerly the research director for Jewish Mosaic: The National Center for Sexual & Gender Diversity, which has now merged with Keshet. She co-founded Storahtelling Colorado and also works as Associate Director and Jewish Educator at Judaism Your Way. She will begin rabbinical school through the ALEPH Jewish renewal program in July, 2013.

Come learn about this new way of narrating and learning history with Professor Caryn Aviv, who uses the method in a CU Boulder Jewish Studies course called “Cultures of Israel and Palestine.” You’ll likely never look at the Middle East the same way again. At Congregation Bonai Shalom, May 3, 2013. To RSVP contact the office at 303-442-6605 or office@bonaishalom.org. Cost is $15/adult, $12/child under 13, $50 max./family, BYOB Kosher Wine.

I am the Office Administrator at Congregation Bonai Shalom.
Previous Calling All Wedding Officiants
Next Moving Yom HaShoah Evening at Nevei Kodesh