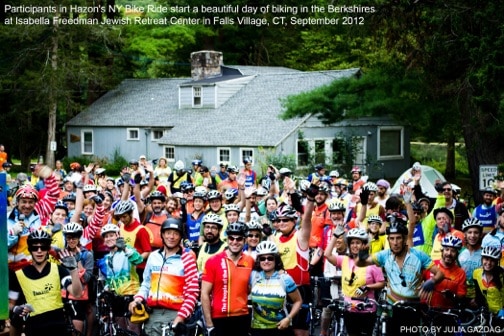 New combined group will be at the forefront of renewing American Jewish life, and creating a more sustainable world for all.

New York City, NY / Falls Village CT, Monday December 3rd 2012 / 19th Kislev, 5773 — The boards of Hazon and the Isabella Freedman Jewish Retreat Center are today announcing the proposed merger of the two well-respected Jewish non-profits.  Both organizations have national impact, and are known for transformative experiences in general, and for leadership of the Jewish Food Movement and Jewish environmental movement in particular.

Board chairs Richard Dale (of Hazon) and Mark Russo (of Isabella Freedman) said, in a joint statement, “we’re proud of the accomplishments of each of our organizations, and we hope and intend that the merger will enable the combined entity to grow more strongly, and to have a more significant human and communal impact, than either could by itself.”

David Weisberg, currently the Executive Director of Isabella Freedman, and the CEO of the new organization, said:

People love being at the Isabella Freedman campus, and many find a spiritual home-away-from-home here, but we also wanted to have a more direct relationship with people in New York City and across the country. Meanwhile Hazon has had a huge impact on people’s lives, has been at the forefront of re-connecting American Jews with the natural world, but has lacked its own physical base. The merger is intended to bring more people to the existing Freedman site, and to enable us together to have a greater impact across the country. We’re excited that the merged entity will have a wide range of programs, great staff and volunteers in California, Colorado and elsewhere, and the opportunity to grow strongly in the future.”

Nigel Savage, the founder of Hazon, a longtime Isabella Freedman board member, and the President of the new organization, added:

The strong growth of Hazon in the last decade is testament not only to our incredible staff, board members, volunteers, participants and funders, it’s also a reflection of the remarkable growth of the wider Jewish Food Movement and Jewish environmental movement.  Both Hazon and Freedman have become known for launching new programs that bring Jewish tradition to life in incredible ways, and we see on a daily basis that our ideas resonate with growing numbers of people. In the next decade we need to take this work to scale, so that we and our partners not only renew and strengthen Jewish life, but also enable the American Jewish community to play a distinctive role in creating a more sustainable world for all. That’s what this merger aims to achieve.”

The merged organization is also expected to include the Teva Learning Alliance, which began in association with Isabella Freedman in the 1990s, but which until now has formally been a program of Surprise Lake Camp. Jordan Dale, the ED of Surprise Lake, and Nili Simhai, the director of Teva, both expressed strong support for the merger: “we’re incredibly proud of Teva, and of the impact that a growing number of Tevaniks are having around the country. We’ve worked closely with Hazon and Isabella Freedman over the last decade, and we hope and believe that the merger will enable the work of Teva and of our partners to grow in the future.”

The new group will be called Hazon, will be headquartered at Falls Village CT and New York City, and will have offices in California and Colorado. The retreat center will continue to be known as Isabella Freedman, which will be one of several “sub-brands” that are intended to grow in the future, including Adamah (the award-winning Jewish farming program), Elat Chayyim (spirituality-based retreats), the Jew & the Carrot (the Jewish Food Movement blog), the Jewish Greening Fellowship (leadership and organizational transformation), Makom Hadash (supporting second-stage non-profits), Shmita Project (a multi-organization partnership to renew awareness of the shmita cycle), Siach (strengthening ties between American, European and Israeli environmental and social justice leaders) and Teva (focusing on environmental education for children and educators).

The chair of the new organization will be Richard Shuster, an Isabella Freedman board member for many years (and a passionate cyclist and skier). He said, “I believe in both constituent organizations, I’m impressed by David and Nigel, and I think that the opportunity to create something that can touch people’s lives, for years to come, in powerful ways, is well worth the challenge.”

Isabella Freedman is a long-standing network agency of UJA-Federation of New York, and for the past several years, UJA-Federation has also provided various programmatic grants to Hazon. John Ruskay, Executive Vice President & CEO of UJA-Federation said, “UJA-Federation’s tagline is ‘Good Together’ and we think that Hazon and Isabella Freedman coming together and sharing each other’s strengths will have a lasting impact on the renewal of Jewish life in New York, nationally, and with deepened connections to Israel. We’re proud to have supported each organization in the past, and look forward to seeing how together they will strengthen our Jewish future.”

The merger has been similarly endorsed by significant leaders in the foundation world:

Felicia Herman, of New York’s Natan Fund, a longtime supporter of Hazon, said, “funders who support innovative young organizations have been wrestling with ‘what’s next’ for these groups.  Bikkurim’s recent Abundant Harvest report articulated some of the key issues and urged us all to think of new approaches to those struggles.  In addition to its own important programmatic work, Hazon has also always worked to address systemic issues in both the Jewish environmental sector and the innovation ecosystem, and this merger is another example of that creativity.  We need multiple approaches to strengthening the Jewish people, but each of those approaches doesn’t need to be a standalone nonprofit.”

Lisa Farber Miller of Denver’s Rose Community Foundation said, “we’re proud to be a significant stakeholder in Hazon’s work in Colorado, and/but we’ve seen in general how important it is for second-stage non-profits to develop sustainable business strategies. Hazon and Freedman should be commended for getting to this point. I very much hope that the new merged entity grows and thrives.”  Dana Raucher, the Executive Director of The Samuel Bronfman Foundation concurred: “Second-stage growth requires nimbleness on the part of funders and organizations.  We applaud Hazon and Isabella Freedman for thinking creatively about their sustainability.”

Similar support came from leading figures in the field. Adam Berman, who at different times directed Teva and Isabella Freedman, founded Adamah, and was a board member of Hazon for seven years, is now the founder and director of Urban Adamah, in Berkeley, CA. He said, “my own experience mirrors, in a way, that of many of the younger Adamahniks and Tevaniks, or the people who’ve done Hazon rides or retreats at Freedman. We don’t want to separate or hive off our identities; on the contrary, we want to grow as Jews and as human beings, to learn, to celebrate, to find new ways to give back.  The growth and partnership of Urban Adamah, Wilderness Torah and Hazon in the Bay Area is a good example of how we can renew Jewish life in incredibly profound ways. I’m excited for this merger, and I send love and blessings to everyone in the Hazon and Isabella Freedman families.”

Merger discussions between the two organizations have been in process since the beginning of the year, and the merger is now contingent only on final due diligence, board approval and regulatory approval.

Staff from both organizations, who have worked together in the past, are already working on the detailed integration of the two organizations.  Over the Labor Day weekend, Hazon’s New York Ride was back at Freedman for the first time in five years; and Hazon’s sold-out Food Conference, taking place at Freedman at the end of this week, will see the first public celebrations of the merger. As David Weisberg put it, “the two organizations are like friends who’ve known each other a long time and one day wonder if maybe they should get married. We already know each other and have shared values. Now that our engagement is public, we’re excited to start to weave a new enlarged Hazon that honors our history and the people who brought us here, while envisioning and creating a dynamic and exciting future.”