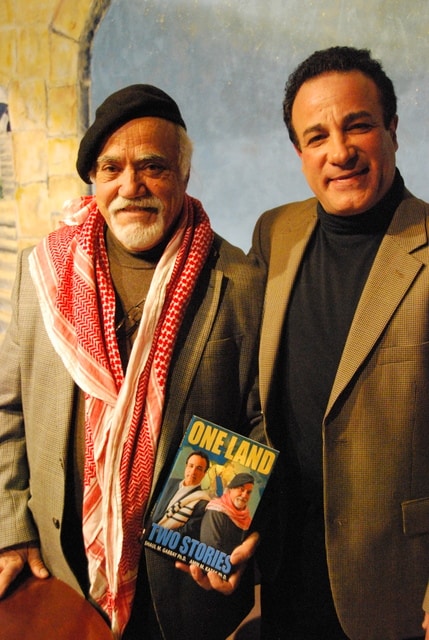 A very unusual event occurred at the Boulder Jewish Community Center on Sunday night: a highly rational and mostly unemotional discussion of the Israeli-Palestinian conflict was held, featuring both an Israeli and a Palestinian refugee.  That both speakers are highly educated, have spent many years in the United States, are both university professors, have taught the subject together, are friends, and have written a book together went a long way in keeping the evening organized and civil.  Not to mention that the moderator successfully kept the large and mostly Jewish audience’s questions to questions, and not merely arguments or opinions.

Shaul Gabbay was born and raised in Tel Aviv. The son of Jewish Arab refugees, his coming of age in Israel filled him with a sense of belonging and pride. He served in the IDF during the Lebanon War, and in fact was stationed just blocks from where his writing partner lived in Beirut at the time.  Educated in Israel, Gabbay’s Ph.D. is from Columbia University, followed by postdoctoral studies at the University of Chicago.  He teaches at the University of Denver. Kazak spoke eloquently about his and his family’s experiences in the run-up to Partition, as well as his subsequent life as a refugee growing up and coming of age in Lebanon.  He provided a perspective on the Israeli-Palestinian situation that is rarely heard in Jewish circles.  Kazak talked about visiting relatives that had remained in Israel in 1948 and became Israeli Arab citizens.  He pointed out that the Israeli Palestinians are far better off than the Palestinians in any other country of the Middle East and presented his case for a secular one-state solution as the only practical solution to two peoples sharing a very small piece of land.  He also admitted that his vision of a single state made up of Jews, Muslims and Christians living peacefully together, intermingled, is extremely idealistic, but that it was largely the situation in Palestine before World War I, and, if not for the dividing and ruling style of the British Mandate, could have worked later as well.

We are all human beings. Call it the Republic of Abraham. How can you tell by looking at me what I believe – whether Muslim, Jewish, Christian?”  – Professor Kazak.

Gabbay spoke of his background growing up as an Israeli Jew, the son of a Jewish refugee from Baghdad who came to Israel in Operation Magic Carpet with virtually nothing.  He gave his defense of a two-state solution, but admitted that ultimately, sometime in the future, there could only be one state whether it comes about directly or through a later federation of Israel with a Palestinian state for economic and general political reasons.  He also brought up that it would probably require the writing of a formal constitution, which Israel does not have today.

Our book has a balanced perspective; each chapter shows each side. Our students see that a Palestinian refugee and a former commander in the Israeli army can respectfully disagree.” – Professor Gabbay

The sold-out crowd of well over 100 was polite and listened intently throughout, and no doubt left the evening a little more thoughtful than they came in.

The author talk, presented by Menorah, was co-sponsored by Congregation Bonai Shalom’s Social Action Committee, Congregation Har HaShem, the CU Program in Jewish Studies and the Jewish Student Association. Mark Loewenstein, professor of law at CU’s Wolf Law School, introduced and moderated the evening. Click here to view the live tweets from the event (the earliest tweet is at the bottom, the last tweet at the top).

I've been writing things since grammar school, and served as a writer, photographer and/or an editor on my junior high and high school newspapers; the Daily Trojan at USC (where I earned my journalism degree); the student newspaper at the Anderson School at UCLA (where I earned my MBA); and written and edited countless business documents and presentations in the ensuing twenty years. I've been involved Jewishly since my bris and in Boulder since 1995. I'm married to my Executive Director Cheryl, and we have two children, Lauren and Ethan.
Previous Hazon and Isabella Freedman Announce Merger
Next Tot Shabbat and Field Trip at Har HaShem