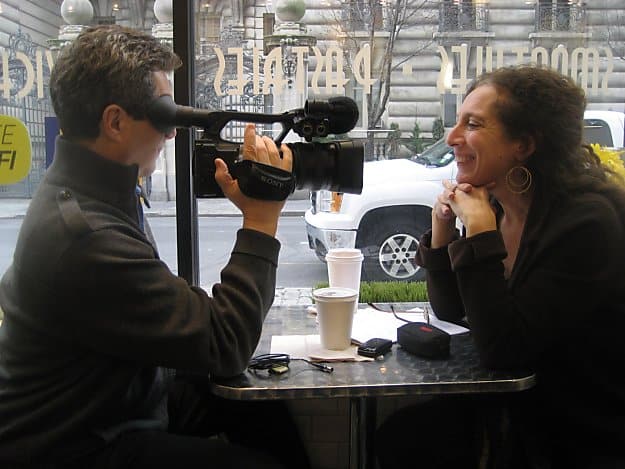 The Fourth Annual Week of Jewish Culture, presented by CU’s Program in Jewish Studies, begins February 27. This year’s series is presented in conjunction with the community collaborative: Movers: Art and Conscience (www.jewishmovers.org) and examines visual culture with a focus on Italian Jewish culture.

As part of this series, we are excited to welcome directors and producers, Alan Snitow and Deborah Kaufman for the screening and after-film discussion of their recent film “Between Two Worlds” on Tuesday, February 28 at 7:00 pm in ATLAS 100 on the CU Boulder Campus.

Who speaks for a divided community at the crossroads? “Between Two Worlds” is a groundbreaking personal exploration of the community and family divisions that are redefining American Jewish identity and politics. The filmmakers’ own families are battlegrounds over loyalty to Israel, interpretations of the Holocaust, intermarriage, and a secret communist past. Filmed in the United States and Israel, this first person documentary begins with a near riot at the Jewish Film Festival in San Francisco, reveals the agonizing battle over divestment from Israel on a university campus, and shows the crackdown on dissent in Israel itself.

Using five unique stories, this film goes beyond the superficial to reveal the passionate debates over identity and generational change that are taking place within today’s American Jewish community. Powerful and divergent feelings about Israel, issues involving ethnic and religious continuity, and the growth of the neo-conservative movement are just some of the provocative issues being addressed. Once seen as a voting block, American Jews no longer seem to be speaking in a singular voice. Clearly intended to spark dialogue, “Between Two Worlds” has already sparked a stimulating dialogue about today’s American Jewish community.

Alan Snitow and Deborah Kaufman are award-winning documentary filmmakers whose films include “Blacks and Jews,” “Secrets of Silicon Valley,” and “Thirst.” Kaufman founded and was the director of the San Francisco Jewish Film Festival, the first and largest independent Jewish film showcase in the world. Their work has been featured at the Sundance Film Festival, the Jerusalem International Film Festival, and aired on public television’s acclaimed “P.O.V.” and “Independent Lens” series. Their films have been used by activists and opinion leaders around the world and have been translated into over fifteen languages and broadcast internationally. The New Yorker magazine has said “Snitow and Kaufman bring a fair-minded skepticism to everything they film.”

This film is free and open to the public but as seating is limited, RSVPs are required.  Please email Nicholas.Underwood@colorado.edu or call CU’s Program in Jewish Studies at 303.492.7143.

CU’s  Week of Jewish Culture continues through Thursday, March 8.  The series kicks off Monday, February 27 at 7:00 PM with the world premier of the Ginzburg Geography with artist Jewlia Eisenberg. This interactive video project and art installation traces the life and work of Leone and Natalia Ginzburg whose journeys of love, resistance, exile, liberation, life and death during WWII and the Holocaust provide the back drop for others to “map” their life journeys. A complete list of programs and details can be found at jewishstudies.colorado.edu or by calling 303.492.7143. The series concludes on March 8 with Purim concerts by the “nerdy, sexy, commie, girly” performances of Charming Hostess.

Assistant Director of the Program in Jewish Studies at the University of Colorado at Boulder
Previous Tribefest: What Happens in Vegas
Next Week in Review: February 24th, 2012