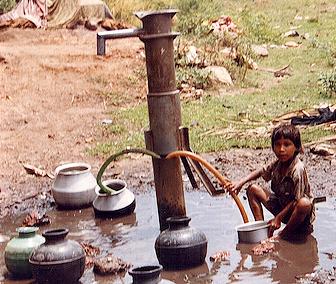 I was sitting in Joscelyn Blumenthal and Butch Weaver’s sukkah last Sukkot when Joscelyn asked me if I had seen “FLOW: For the Love of Water.” I had not heard of the 2007 documentary detailing the global water crisis. She suggested I show it at the Boulder JCC, and we met to discuss the possibility.

I was struck by her passion and her determination to tackle this problem. She was eager to share the film with Boulder audiences and happy to help make that happen. Coincidentally, the JCC’s Maimonides Wellness Center was just expanding its mission of focusing on physical, emotional and spiritual health to include programs dealing with the health of the planet.

On Tuesday, April 5 at 7 pm, the JCC will host a special screening of “FLOW,” with guest speaker Sam Schabacker, senior organizer of Food & Water Watch. This national organization works to ensure that the food, water and fish we consume is safe, accessible and sustainably produced.

Irena Salina’s award-winning documentary investigates what many experts label the most important political and environmental issue of the 21st Century. Salina builds a case against the growing privatization of the world’s dwindling fresh water supply with an unflinching focus on politics, pollution, human rights, and the emergence of a world water cartel.

Interviews with scientists and activists reveal the rapidly building crisis, on both the global and human scale, and the film introduces many of the governmental and corporate entities behind the water industry.

Beyond identifying the problem, “FLOW” also gives viewers a look at the people and institutions providing practical solutions to the water crisis and those developing new technologies, which are fast becoming blueprints for a successful global and economic turnaround.

The New York Times review called the film “an informed and heartfelt examination of the tug of war between public health and private interests. From the dubious quality of our tap water (possibly laced with rocket fuel) to the terrifyingly un-policed contents of bottled brands (one company pumped from the vicinity of a Superfund site), the movie ruthlessly dismantles our assumptions about water safety and government oversight.”

There is no charge for the evening but reservations are appreciated. Call Kathryn at 303-998-1021 or email Kathryn@boulderjcc.org.  Co-sponsored by the BJCC’s Maimonides Wellness Center, Joscelyn Blumenthal, Food & Water Watch, and Hazon.

Kathryn has spent her professional life writing about, teaching, and presenting the arts. Founding Director of the Boulder Jewish Film Festival, Kathryn was Director of Menorah and ACE at the Boulder JCC from 2003 through August, 2019. The former film and theater critic for the Boulder Daily Camera, Kathryn is the author of "The Fifty Greatest Jewish Movies" and "The Fifty Funniest Films of All Time." kathryn.bernheimer@gmail.com
Previous Pizza For a Good Cause
Next Media Matters vs. Fox News: Israel Impact?