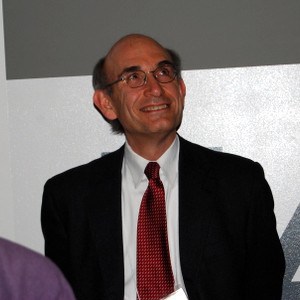 CU formally launched the Brian E. Lebowitz Collection of 20th Century Jewish-American Literature Thursday night in an event on campus featuring readings by three authors whose works are in the collection. The event also included a small exhibition of selected books from the collection, including some very rare and valuable books.

The authors appearing at the event were: Steve Katz, critically acclaimed author and CU professor emeritus of English in the Creative Writing Program; Sidney Goldfarb, renowned poet, playwright, professor of English and co-founder of the Creative Writing Program; and Robert Alter, one of the world’s foremost translators of the Hebrew Bible and scholar of modern Jewish literature.

Brian E. Lebowitz has a deep fondness for used books and bookstores, a keen interest in Judaica and the acumen to amass a collection of 19,000 works of 20th century Jewish-American Literature. Lebowitz, a tax attorney, said he assembled the collection partly because he found “satisfaction in building something of potential value that would survive me.”

The collection of books, all in English and all first-edition volumes, some very rare, spans more than 100 years of Jewish-American literature, includes the work of more than 1,500 authors and comprises Jewish-American authors published in the last century.

This rich, comprehensive collection of 20th century Jewish-American fiction will support the teaching, research and discovery agendas of, for example, the English, history, religious studies and sociology departments, ranging from the ancient past to the contemporary moment,” said James Williams II, dean of CU libraries.  “More specifically, it will support, as never before possible, the comparative and theoretical work of the faculty that focuses on American Jewish diversity and identity through the lens of literature.”

David Shneer, associate professor of history and director of CU’s Program in Jewish Studies, said the Lebowitz gift will help define the future research and teaching agenda of CU Jewish studies.  Further, Shneer suggested, the collection complements the program’s existing work. “Many of our faculty members have designed curricula around literature and culture, making the collection central to the work this university does.”  Shneer added that the collection will be a central resource and a recruiting enticement for students and faculty in CU’s growing Jewish studies program.

The reception was held in the lobby of the CU Art Museum, just outside the gallery where artist Yael Kanarek’s piece, “Untitled (L’origine)”, is being exhibited.  Kanarek was featured in a Movers event earlier this week, and was in attendance at the reception.

Pictures from the event:

They call me "NewsHound IV," because I'm a clever Finnegan, sniffing out stories all over the Boulder area. I love Jewish holidays because the food is GREAT, especially the brisket. Well all the food. I was a rescue pup and glad to be on the scent!
Previous The People of the Book Fair
Next The JCC is on a Klezmer Chai