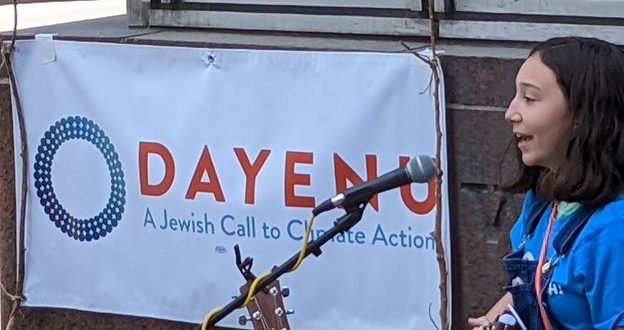 Matzah in Hand, Local Jewish Leaders and Allies Call on Wells Fargo to “Move Their Dough” from Fossil Fuels

Becky O'Brien April 21, 2022 News Comments Off on Matzah in Hand, Local Jewish Leaders and Allies Call on Wells Fargo to “Move Their Dough” from Fossil Fuels

On April 19, Jewish leaders from Colorado Jewish Climate Action (CJCA) and Dayenu: a Jewish Call to Climate Action, Colorado Jews for Justice, and Ekar Farm gathered in front of the Denver branch of Wells Fargo Bank to call on Wells Fargo CEO, Charlie Scharf, to take immediate action to end their investments in fossil fuels.

Emphasizing the urgency of the moment and lifting up the symbols of Passover, community leaders proclaimed the plagues that fossil fuel Pharaohs – coal, oil and gas companies – have inflicted on us. They held up matzah to demonstrate the urgency needed to confront the climate crisis and urged Charlie Scharf and Wells Fargo to “move their dough” out of pollution-generating fossil fuels.

Matzah, the “bread of affliction” and a symbol of freedom that our ancestors ate as they left Egypt, represents the urgency with which we must act. Like our biblical ancestors in Egypt, we cannot wait for the dough to rise: we must confront the climate crisis now. Financial institutions such as Wells Fargo have a responsibility to accelerate the transition to a clean energy economy that can support a just and livable future for all, for generations to come.

Moshe Kornfeld, leader of CJCA, said: “As we mark the Jewish holiday of Passover, when we remember the Exodus from Egypt, Mr. Charlie Scharf has an opportunity to leave the polluting past behind and demonstrate that Wells Fargo is serious about fulfilling their zero emissions commitments. The CEO of Wells Fargo must immediately end all investments that expand coal, oil, and gas extraction, and wind down finance for the polluting fossil fuels that are driving the climate crisis.”

Mr. Alan Halperin, a resident of Louisville, spoke about how he lost his home and possessions in the Marshall fire.

Ms. Lexie Miller, a 7th grade student from Boulder, sang “Enough is Enough,” an original song she composed for this event.

After completing the song, Lexie Miller, Jason Moses, and Moses’s 3-year-old son attempted to deliver a letter for Charlie Scharf, the CEO of Wells Fargo. However, the bank had locked its doors at the beginning of the rally and did not allow them to enter.

Climate change is an issue American Jews care about profoundly. According to a recent survey by the Jewish Electorate Institute, climate change is the top issue for Jewish voters across the country.

As Jews, we are commanded to protect the vulnerable (shomer ger yatom v’almanah). The climate crisis is not only an existential threat, it is also a moral crisis. Millions of Black, brown, Indigenous, and poor people in our country experience environmental racism every day when they are forced to breathe polluted air and drink poisoned water caused by fossil fuel and other noxious industries in their neighborhoods.

Dayenu’s “All Our Might” campaign is mobilizing Jews to demand that our country’s largest financial institutions, as some of the top global investors in fossil fuels, take decisive action and fulfill their zero emissions commitments. Wells Fargo must stop financing the climate crisis and instead must make the bold investments in clean energy that we so desperately need.

Hazon is America's largest Jewish environmental organization. We create healthier and more sustainable communities in the Jewish world and beyond. Hazon in Colorado is led by Becky O'Brien, Boulder Director and Sarah Kornhauser, Denver Director.
Previous This Week at Nevei Kodesh, April 22-28
Next Join the Cherryvale Summer Camp Team! 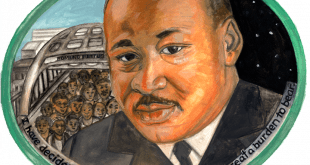 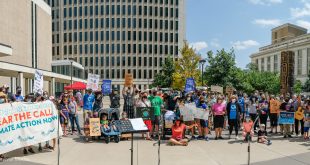 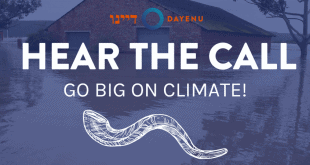