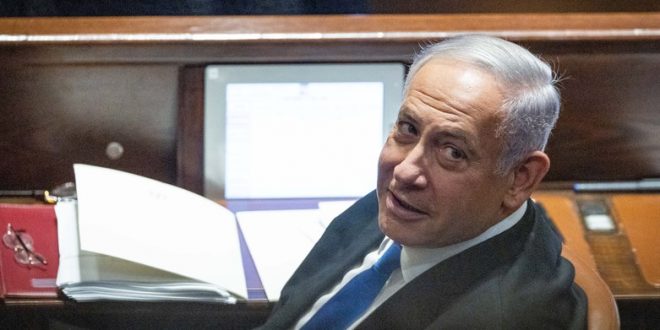 Bruce Ticker June 23, 2022 Guests and Blogs Comments Off on Column: With Bibi’s Bungling, Who Needs Antisemites?

As Jerry Seinfeld would put it, “And you want be prime minister again.”

While Seinfeld once caught George Costanza sprawled on the floor in his underwear after stumbling in Seinfeld’s living room, last week Benjamin Netanyahu stumbled – a generous description – by comparing accusations against his family to a “blood libel.”

In effect, he called Ehud Olmert an antisemite in spite of both being Jewish and likewise Netanyahu’s predecessor as Israel’s prime minister.

Netanyahu, commonly known as “Bibi,” displayed a serious lapse of judgment on Monday, June 17, when he wrote in a Facebook post that Olmert “brought former employees who would give false testimony and slander my family with a baseless blood libel.”

Netanyahu’s post follows a court hearing the day before in which Netanyahu is suing Olmert for libel when Olmert described the family as “mentally ill” and in need of psychiatric treatment during two interviews held at the time of an election in spring 2021, The New York Times reports.

What does Netanyahu’s trial have to do with blood libels? The Anti-Defamation League affirms that blood libels are all about antisemitism:

“The ‘blood libel’ refers to a centuries-old false allegation that Jews murder Christians – especially Christian children – to use their blood for ritual purposes, such as an ingredient in the baking of Passover matzah (unleavened bread). It is also sometimes called the ‘ritual murder charge.’

“The blood libel dates back to the Middle Ages and has persisted despite Jewish denials and official repudiations by the Catholic Church and many secular authorities. Blood libels have frequently led to mob violence and pogroms and have occasionally led to the decimation of entire Jewish communities.

“The blood libel is particularly appalling in light of the fact that Jews follow the Hebrew Bible’s law to not consume any blood, which is found in the book of Leviticus. In order for an animal to be considered kosher, all its blood must have been drained and discarded.”

Why would Olmert, who served as prime minister from 2006 to 2009, accuse Netanyahu of a blood libel? Specifically, that Netanyahu murders Christian children to improve his matzah consumption.

Netanyahu played the antisemitism card. It is shameful enough when some Jews play that card where there is no justification for it, or under similar circumstances when blacks play the race card or women play the gender card. But Netanyahu is among the most prominent Jewish leaders in the world who identifies strongly with both Israel and America. He should know better.

What are others to think? That includes people who are neither antisemitic nor harshly critical of Israel. What am I supposed to tell anyone who confronts me with the prime minister’s conduct? If a former prime minister of Israel blames his personal troubles on antisemitism, do all Jews behave this way?

Worse still, Netanyahu may get the chance to play the Jewish card once again in his role as prime minister. As the news broke on Monday, Israel’s governing coalition collapsed, forcing new elections one year after displacing Netanyahu as prime minister. Bibi hopes to return to his old job from which he can accuse fellow Jews of antisemitic jabs to his heart’s content.

To state the obvious, Netanyahu potentially planted another obstacle for his own people. Now, who needs antisemites when we have Netanyahu?

Bruce S. Ticker, who writes from Philadelphia, also blogs for The San Diego Jewish World and Smirking Chimp and previously for the suspended Philadelphia Jewish Voice. He was previously a reporter and copy editor for daily newspapers in eastern Pennsylvania.
Previous Letter: Boston Mapping Project: Latest Version of IBM’s Mapping Germany’s Jews for the Nazis
Next Abraham Accord Country Faculty Coming to Brandeis University for Israel Studies Fellowship Program