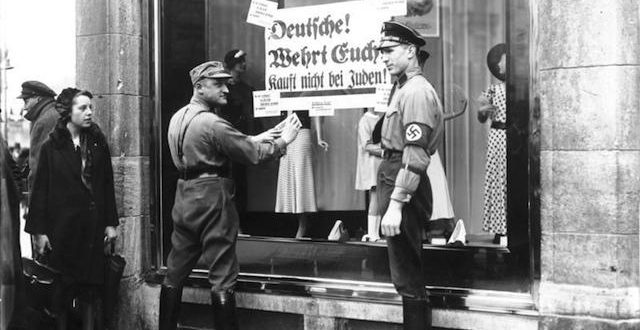 Never would we expect Nazis assaulting an American Jew near Disney World. Or anywhere else in this nation.

Yet authorities report that Nazis did in Orlando nearly two weeks ago what Nazis commonly did in Germany 85 years ago. Furthermore, the victim – identified as David Newstat, a student at the nearby University of Central Florida – told WOLF-Fox 35 that some of his relatives survived the Holocaust.

Jewish college students in Brooklyn and Leeds, England, were victimized in shocking if less severe firsts that emerged at the same time. At Brooklyn College, a white professor told a Jewish student that his existence as a white man outweighed his Jewish identity. A Jewish student’s essay at Leeds University was rejected because she neglected to blame Israel for a share of Hamas war crimes.

Tuesday morning, news broke that a vice principal threatened a Jewish high school student with disciplinary action after he notified the community that a teacher ordered students to make a Nazi-like salute.

As firsts, I had not heard of such episodes occurring in civilized places until the past week. We can add them to an accumulating list of firsts that I came across since this ongoing wave of antisemitism exploded. Among other firsts, three synagogues were the scenes of assassinations or hostage-taking, as we are all aware.

Less known was a school board member in Lowell, Mass., publicly referring to Jews as K—s; a letter published in a Halifax daily newspaper that accused Jews of killing Jesus; and a group of college teachers in Lancaster, Pa., who brought to the surface the phrase “Jewish supremacy.”

Now news of four new ones in the space of a few weeks.

The Orange County Sheriff’s Office reported last Friday that two members of the National Socialist Movement were charged with misdemeanor battery charges that are being upgraded to third-degree felonies under Florida law after video showed them attacking the Jewish student, according to the Orlando Sentinel. A third Nazi was arrested for grand theft.

A video taken by the victim showed Burt Colucci approaching the student’s car and spitting at him while shouting antisemitic slurs, the Sentinel reported. Other video showed the victim arguing with an older neo-Nazi who spat at his car before the student left his car and shoved the man to the ground. Deputies said that Joshua Terrell repeatedly punched him and Colucci pepper-sprayed him.

The Jewish Telegraphic Agency noted that the student identified himself as Jewish and the suspects assaulted him.

Brown then allegedly stole the student’s phone, which was dropped on the ground during the beating and was later found “damaged beyond repair,” according to affidavits released by the sheriff’s office, as the Sentinel reported.

“I’m trying to go to the store, to Target, and I’m coming back home, and I’m being berated by Nazis. … It’s very sad to see people like this can be so ignorant and can have so much hatred built up in their hearts,” Newstat told the TV station.

JTA reports that the attack on Newstat occurred amid a Jan. 29 rally at an overpass that drew about 20 people identifying with the neo-Nazis, who shouted antisemitic slurs at passersby.

In an evasion that “will live in infamy,” as President Franklin D. Roosevelt would say, Florida Gov. Ron DeSantis refused to specifically condemn the rally, instead injecting partisan denunciations.

“So what I’m going to say is these people, these Democrats who are trying to use this as some type of political issue to try to smear me as if I had something to do with it, we’re not playing their game,” DeSantis told reporters who asked him about the rally on Monday, Jan. 31, according to The Times of Israel.

DeSantis did add, “Some jackasses doing this on the street, first of all, state law enforcement is going to hold them accountable because they were doing stuff on the overpass. I’m not going to have people try to smear me who belong to a political party that has elevated antisemites to the halls of Congress (a reference to a small minority of Democratic members of Congress who were branded as antisemitic). Why would they do that? Why would they want to elevate a half-dozen malcontents and try to make an issue for political gain?”

Dissecting the other three episodes would take another full-length op-ed. Briefly, Southern Jewish Life magazine reported that a teacher at Mountain Brook High School outside Birmingham, Ala., instructed his class on Jan. 18 to raise their arms in a stance resembling a Nazi salute. A few refused, including a Jewish student, Epps Tytell, and a non-Jewish classmate took a photo and a brief video clip, which Epps shared on his social media.

Epps’ parents said he was pulled out of Math class the next day and brought to the office of Assistant Principal Jeremy Crigger, where he was told to apologize to the teacher, Joe Webb, for filming without permission, and they demanded that he snitch on the classmate who took the video. Epps’s mother, Mariya Tytell, said they warned him, “If this blows up there will be more disciplinary action, because you are making Mountain Brook look bad.”

Jewish students who complained of “severe and persistent harassment” at Brooklyn College have won the attention of the Biden administration, New York Jewish Week reported. A federal investigation has been launched by the Department of Education’s Office for Civil Rights in a complaint alleging that Jewish students in the MHC program have been “bullied and harassed in class discussion and on social media by student peers, who target Jewish students using the same ethnic stereotypes, antisemitic tropes and divisive concepts that faculty members promote in their courses.”

Among examples reported by Jewish Week, the complaint charges that one professor said that Ashkenazi Jews who immigrated to America have become “oppressors.” Another professor allegedly rebuked a Jewish student for ranking the student’s Jewish identity before their white identity, suggesting they “did not understand oppression.”

In England, Danielle Greyman may sue Leeds University for breaches of the Equality Act and negligence after the university failed her essay on crimes by Hamas against Palestinians because Israeli actions in Gaza were left out, London’s Jewish Chronicle reported.

“It should not be a controversial statement to say that Hamas commit(s) crimes against Palestinians as these facts are supported and well known,” she said.

When she stated in her essay that Hamas treats children as human shields, an academic wrote, “What about the (Israeli) war crime of killing them?”

So there you have it: Within two weeks, Nazis beating a Jewish college student, educators threatening a Jewish high school student for potentially making his school “look bad,” yet another Jewish student preached to about his identity and a British professor re-interpreting Israeli history. Does all this “look bad?” Perhaps none of this would look bad if it was not, ahem, bad.

Bruce S. Ticker, who writes from Philadelphia, also blogs for The San Diego Jewish World and Smirking Chimp and previously for the suspended Philadelphia Jewish Voice. He was previously a reporter and copy editor for daily newspapers in eastern Pennsylvania.
Previous Letter: Israel Apartheid: Not
Next Next Women’s Brunch and Learn This Sunday, February 13