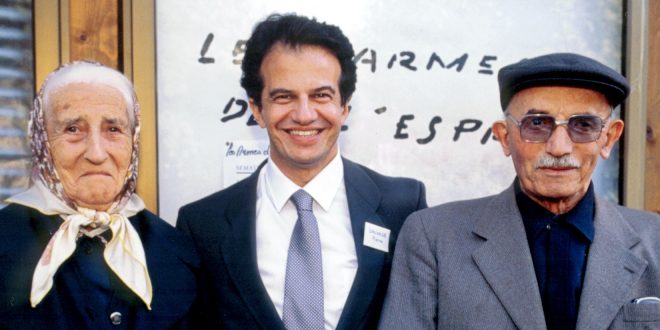 When Pierre Sauvage was a young filmmaker, curious about the Jewish identity that had come as a revelation to him at age 18, his wife suggested he examine Yiddish language and culture, then perceived as a dying heritage.

Pierre set about finding every leading expert at the time, and, tellingly, used the music of a new group called Klezmorim – the world’s first klezmer revival band, widely credited with spearheading the global renaissance of klezmer in the ’80s. Little did Pierre know how prescient his documentary would be.

Today, more than 40 years after the film was made, we have the unique opportunity to view this time capsule and to discuss the surprising evolution of Yiddish with current leading lights.

“Yiddish: The Mother Tongue” is part of our retrospective tribute to Pierre Sauvage on the occasion of his remastered re-release of 1989’s Holocaust hallmark, “Weapons of the Spirit.”

Audiences who view the 1979 documentary also are treated to an hour-long conversation with novelist Dara Horn, The Forward‘s Rukhl Schaechter, academic and author David Fishman, and original participant Richard Silverstein, conducted by the filmmaker.

The panelists discuss the impact Yiddish has made on American culture – not to mention its influence on Jewish life today.

They discuss how Yiddish went from being an embarrassing reminder of old-world customs from which Jewish American immigrants wanted to quickly distance themselves to having hugely positive association today.

The Yiddish “Fiddler’s” smash success on Broadway is but one indication that the resurgence of interest in Yiddish is not just the result of quaint nostalgia but a full embrace of a rich legacy almost lost.

How did Yiddish come back from the brink? The secular left took up the Yiddish cause. Universities began offering serious investigation of Yiddish, introducing a new generation to the literature, language, and most famously, the music of the shtetl, which caught on with the public. Meanwhile, the Orthodox world ensured it remained a spoken language, and there are more than a million Yiddish speakers today.

Natan Sharanky even influenced Israel, which had opted for Hebrew pride over Yiddish familiarity when choosing a national language, urging greater acceptance of the Russian and Yiddish speaking Jewish people. Tel Aviv University, in fact, now offers the world’s best summer program in Yiddish, according to Rukhl Schaechter. Eastern European food has become trendy, as the abundance of Ashkenazi restaurants and cookbooks reveal.

The idea that the Yiddish world was destroyed by the Holocaust is also discussed, and while the destruction of European Jewry by the Nazis is responsible for its tragedy, Dara Horn optimistically points out that the cycle of loss and recovery defines Jewish history. The reports of the death of Yiddish, thankfully, turned out to be greatly exaggerated.

To watch “Yiddish: The Mother Tongue” and the talkback with Pierre Sauvage and his esteemed guests, CLICK HERE.

Kathryn has spent her professional life writing about, teaching, and presenting the arts. Founding Director of the Boulder Jewish Film Festival, Kathryn was Director of Menorah and ACE at the Boulder JCC from 2003 through August, 2019. The former film and theater critic for the Boulder Daily Camera, Kathryn is the author of "The Fifty Greatest Jewish Movies" and "The Fifty Funniest Films of All Time." kathryn.bernheimer@gmail.com
Previous Help JFS Boulder Provide Passover Provisions to Homebound Adults
Next Become a Cherryvale Day Camp Counselor at the Boulder JCC!