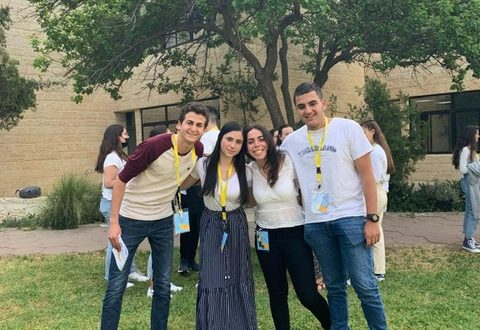 (DENVER) – JEWISHcolorado is set to welcome four young Israelis on August 13 — recent high school graduates who have an opportunity to delay mandatory service in the Israel Defense Forces and serve Diaspora communities around the world. They are called ShinShinim, a Hebrew acronym for Shnat Sherut or “year of service.”

ShinShinim volunteers spend a year immersed in the local Jewish community, teaching and educating the youth of the community about Israeli culture and society, the Hebrew language, current affairs, and Jewish tradition. “These students are often called ‘the living bridge’ between our community and those in Israel,” said Rabbi Jay Strear, President and CEO of JEWISHcolorado. “The Shinshinim serve as Israeli cultural ambassadors who ultimately strengthen our Jewish community and family ties.”

ShinShinim are chosen from more than a thousand candidates after a lengthy and thorough selection process. This is the eighth cohort of students to be hosted in Colorado and includes Itay Kurant from Herzliya (near Tel Aviv), Noa Kurlender from Atlit (south of Haifa), Yali Harel from Haifa, and Yoav Filo from Moshav Kidron (near Rehovot and Ashdod). Meet them:

The emissary program attracts participants from all sectors of Israeli society and all backgrounds. While the program has operated for more than 20 years and sends some 200 Israeli teens to Jewish communities to North America, South Africa, and Europe. It is also part of a larger yearly Jewish Agency delegation of 2,000 emissaries of different ages and backgrounds who work around the world at summer camps, university campuses, youth movements, synagogues, JCCs, and Federations.

The local program is a partnership between JEWISHcolorado and the Jewish Agency for Israel (JAFI), and at the national level is also supported in part by the Jewish Federations of North America (JFNA) and Keren Hayesod – United Israel Appeal.

Former chair of the Jewish Agency and now President of Israel Isaac Herzog summed up the positive impact of the ShinShinim program:

“The thousands of Jewish Agency shlichim serving in communities around the world create a living bridge between global Jewry and Israel. They bring Israel directly into the homes and hearts of hundreds of thousands of people – children, teens, families. And when they return to Israel, they continue to build this two-say bridge, brining the voice of world Jewry to Israeli society.”

Previous Column: Past Time for “Telling the Truth” About Palestinian Lies
Next Boulder JCC Invites You to an Outdoor Music Concert