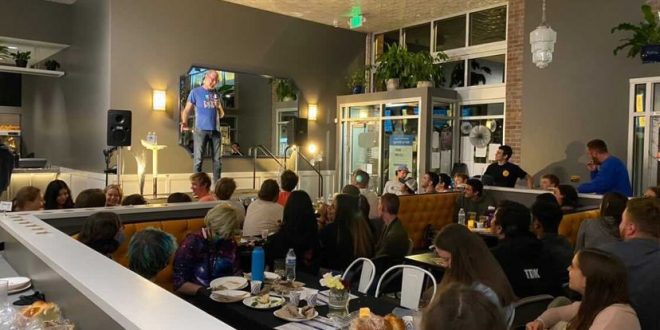 As a teenager from Israel, one of my favorite places to visit is the University of Colorado at Boulder. I am one of four teen emissaries (Shinshinim) here in Colorado for the year, working on behalf of JEWISHcolorado and the Jewish Agency for Israel. I love the CU-Boulder campus, including the outstanding mountain view that you can see from anywhere. More importantly, the reason I enjoy Boulder is visiting the warm and welcoming Hillel staff who have so openly welcomed all the Shinshinim.

We’ve had the opportunity to attend Shabbat dinners at the Hillel House, hang out with friends our age, and form meaningful friendships with them. Last Friday, we were invited to join the students for a Shabbat dinner featuring a stand-up show called Comedy For Peace.

Comedy for Peace is a project that started in 2019 and brings together the best Muslim and Jewish stand-up comedians for an inspiring, funny, and unforgettable evening. Their performance at another Hillel generated this review, “Pandemic or no pandemic, laughter is an essential part of life, the crew at Comedy4Peace surely brought the laughs.”

The dinner and show took place at Rosenberg’s Deli on the Hill with more than 50 students in attendance. The show started after a traditional Kiddush and Shabbat dinner.

The three stand up artists who performed were funny and unconventional. The group was founded by comedian/producer Dotan Malach, who says he knew that the political situation in the Middle East isn’t easily fixable but that on a personal level, we’re all human beings who want to work and live together, peacefully. Says Malach, “The first goal of Comedy for Peace is to show everyone that we can, very easily, collaborate, standing on one stage together, to have fun and to laugh on ourselves and on each other, without any politics involved.”

“Our show is a relief from the concerns of the day, with an important message that we, the people, just want to live together peacefully. Our show proves Muslims and Jews can work together, laugh at themselves and each other and be friends. We refuse to be enemies!”

It was a fun, relatable night, and they brought the crowd together through laughter and joy.

I am so thankful for CU-Boulder Hillel for inviting the Shinshinim and of course for Buffs for Israel, led by Assaf Doron, the Israel Fellow at Boulder, for organizing the event.

Hey everyone! My name is Noa Kurlender and I am one of the four new Shinshinim in Colorado. A Shinshin is the Hebrew shortcut for "Shnat Shierot"- A year of service, a program that allows us to postpone our mandatory IDF service by a year and volunteer. There are many different kinds of Shinshinim in Israel, but I really wanted to experience the difference between Israel and the U.S, and bring the Jewish community in Colorado closer to Israel, and hopefully the bring Colorado back to Israel with me. The Shinshinim work at Jewish clubs at public high schools, at Denver Jewish Day School, at CU boulder, CSU and DU Hillel, at the Boulder JCC, and many different synagogues in Denver and Boulder. Being a Shinshin definitely means learning something you every day- about ourselves, about America and about our homeland. I am so thankful for the right I've been given to spend my Shinshin here in Colorado, and especially to share my journey with you. Until we leave after summer camps and go back to Israel to serve in IDF, I will document some of the amazing things we get to do here and share them with you. A little bit about myself- I am the oldest of 3. My family lives in Atlit, a town 10 minutes away from Haifa, just by the beach. I graduated high school a few months ago. I majored in Computer Science and Physics, and hope that my army service will have something to do with these subjects. I love reading books and going on hikes, and enjoy Colorado views so much!
Previous 10th Jerusalem Winner Marathon: Running Through 3,000 Years of History
Next Boulder Teens Invited to Learn About Summer Israel Trip Opportunity