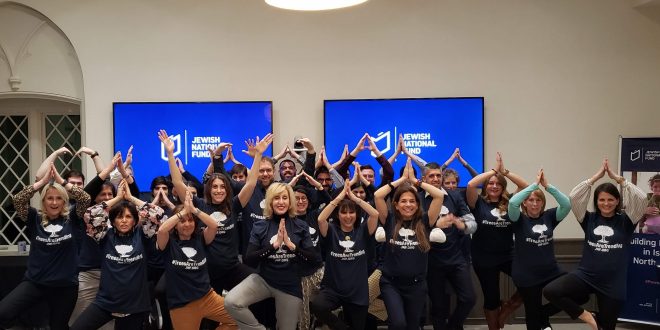 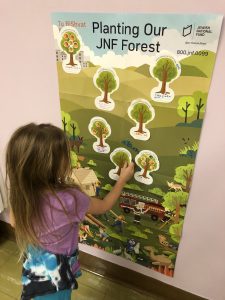 Trees will trend this Tu BiShvat as Jewish National Fund-USA (JNF-USA) drives awareness about the New Year for trees while highlighting its afforestation efforts in Israel. Throughout early February, JNF-USA will create a ‘viral’ #TreesAreTrending social media campaign in addition to running a sweepstake and educating thousands of students and teachers about Tu BiShvat – the original ‘Earth Day.’

JNF-USA supporters along with social media influencers, celebrities, and public figures are being encouraged to participate in the organization’s inaugural Yoga Tree Pose Challenge taking place between January 31 – February 10. As part of the challenge, participants will be asked to take a picture of themselves holding the yoga position ‘Tree Pose’ and then post it on Instagram or Facebook with the hashtags #TreesAreTrending and #PoweredByJNF, while tagging three friends to do the same within 24 hours. If they don’t, they have to plant a tree with JNF-USA at jnf.org/trees.

JNF-USA suggests participants include an accompanying post to their tree-pose photo or video such as: “I just completed Jewish National Fund’s Yoga Tree Pose Challenge, now it’s your turn (tag 3 friends)! Post a picture or video of yourself doing the Yoga Tree Pose with the hashtag #TreesAreTrending and then challenge 3 of YOUR friends. If you can’t complete the challenge within 24 hours, plant a tree with JNF! Better yet, do both!”

Jewish National Fund is also running a Catch the Tu BiShvat Spirit sweepstakes. Everyone who purchases a tree through JNF-USA between January 31 – February 10 will be entered into the sweepstakes for a chance to win two economy round trip tickets to Israel courtesy of EL AL and two nights’ accommodation at the Carlton Tel Aviv.

Jewish National Fund’s Israel Advocacy and Education Department will celebrate Tu BiShvat through a myriad of activities and fundraising efforts across JNF-USA’s Israel Continuum. The Department has built a dynamic series of initiatives to inspire students of all ages in addition to teachers, youth workers, and rabbis about the holiday and its connection to JNF-USA. The initiative will reach tens of thousands of students and hundreds of educators in more than 400 schools. Schools received an education pack that includes relevant texts and science experiments, packages of seeds, informative posters to be hung in the classroom, and information about running a tree-planting campaign in their school. Schools that plant 100 trees or more ($1,800+) will receive special recognition at American Independence Park in Jerusalem. Schools will also earn prizes based on the volume of trees sold. In addition, JNF-USA’s education department is running a national contest where students can win prizes based on individual tree sales. Digital materials are also available on JNF-USA’s website and are accessible for any educator or student.

Locally, Jewish National Fund is planting trees in Israel with the help of the Colorado community. Over 20 Colorado organizations are participating in the campaign. Participating schools will be eligible for a special prize for the student who sells the most trees and the organization that sells the most trees will be highlighted in the IJN after the campaign is finished.

On college campuses, 25 Jewish National Fund Campus Fellows will be hosting Tu BiShvat events and have partnered with Alpha Epsilon Pi (AEPi) on a program called ‘Tu BishBox.’ As part of the program, JNF-USA sent Tu BiShvat themed boxes to more than 150 AEPi chapters across the country with materials to encourage local chapters to reduce their environmental footprint. In addition, Titi Aynaw, JNF’s Positively Israel Ambassador will be visiting the college campuses in February to coincide with Tu BiShvat.

Previous Author Mary Morris to Speak at Boulder JCC on January 29
Next Musical Kabbalat Shabbat is BACK at Bonai This Friday!