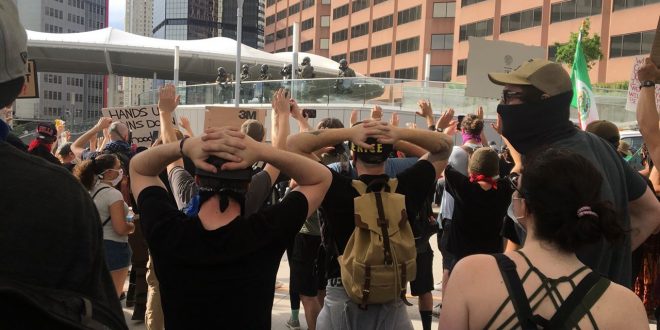 Paul Korda May 31, 2020 Guests and Blogs Comments Off on Korda: Reports from Denver Protests

Denver, Colorado was among the many cities across America where thousands of people demonstrated against Tuesday’s sickening atrocity in Minneapolis ….. where George Floyd, a subdued and handcuffed Black man lying on his face in the street had his life choked out of him by a white police officer’s knee on his neck as he screamed “I can’t breathe” and “Mother help me.” With visceral rage and utter disgust, we took to the streets to PEACEFULLY demand justice for Mr. Floyd and to bring attention to the routine use of deadly force by cops against unarmed, defenseless Black and Latino men, especially young ones.

With raised clenched fists and carrying signs (mine misspelled, no spell check in my cranium), hundreds of us marched down the streets of downtown Denver bringing traffic to a standstill and shouting “Black lives matter,” “No Justice! No peace!,” “What’s his name? George Floyd,” “I can’t breathe,” and “What do we want? Justice! When do we want it? Now!”

As in the 60’s, our youth led the way. I was proud and joyfully nostalgic to be among them. They give me hope that perhaps this time we will bring an end to the pervasive, unending sadistic brutality and racism that exists, without any sign of abatement, in nearly every police department throughout the land.

Cops, prosecutors, mayors, governors wring their hands and promise change but there is no change. There is no accountability, no arrests, no prosecutions, no justice. Only the Cult Leader, masquerading as our president, threatening bloodshed against the protesters. We – my generation – helped end the Vietnam War with street protests (not always peaceful). We can do it again to end racist police brutality and to bring the brutalizers to justice.

Back on the streets of downtown Denver. The size of the crowd is at least five times larger than it was yesterday. Also, a subtle difference – We got tear gassed, a lot. The cops shot tear gas canisters into us without any provocation whatsoever.

The young men and women in the crowd shouted slogans (and probably a few choice expletives) at the police. There were no commercial establishments within a mile of where we were. No one was there to loot. We were not endangering the safety of anyone. There was no one around to endanger.

But the tear gas flew. Followed by golf ball size projectiles that leave a good sized welt on the body. (Law enforcement claims that this is more “humane” than rubber bullets.) I saw a huge welt on a young man’s back – yes, back…meaning he was moving away from the cops when they unnecessarily shot him.

This, in turn was followed by a phalanx of heavily armed cops in riot gear and a menacing SWAT team. They herded us to wherever they wanted. But not without resistance. Some just sat in the streets. Presumably they were arrested. Some tried to engage individual officers in a conversation about what it means to be a cop. Most just chanted and shouted slogans and took their time in moving back from the baton-wielding police.

I’ve been tear gassed before. But it’s been at least 50 years ago. I’d forgotten how nasty that shit is. My eyes teared up and closed so I could barely see. My lungs burned and I could barely breathe. I sat by myself, coughing uncontrollably and half blinded, on some concrete steps when three young ladies came to ask me if I was OK. I replied … not so much. So they had me tilt my head back, keep my eyes open, and flushed them with water followed by a spray of hydro … who-knows-what that really helped.

Funny how in these mass rally situations we find small, random ways to perform tender acts of loving kindness. Inexplicably, my friend and I didn’t see a single soul in the crowd who was above the age of 40. This is no exaggeration. Disappointing to see that my generation sat out these protests. I suspect they were all at home taking a nap.

As dusk fell things turned nastier. My friend and I left the scene. I had foreboding thoughts about the imminence of violence. As of midnight: things are ugly but not as ugly as in other major American cities. (Small consolation.)