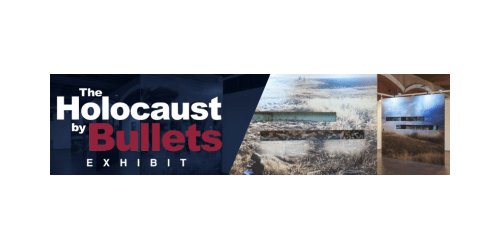 Last fall, the Boulder JCC partnered with global humanitarian organization Yahad-In Unum and the Yahad Colorado Committee to present the “Holocaust by Bullets” exhibit. This powerful exhibit drew over 2,000 visitors to the Boulder JCC, including nearly 800 students and over 70 groups from community organizations. 56 educators and 70 community members participated in four additional educational opportunities offered during the Holocaust by Bullets Education Week.

The Holocaust by Bullets exhibit focuses on the mass shootings of Jews throughout Eastern Europe by the Nazi mobile killing units from 1941 to 1944, and the mechanisms of mass violence generally. It pays homage to the memories of the victims while seeking to promote a proactive movement against genocide. This was the first exhibit of its kind in Boulder.

One of the lessons of this exhibit is that the Holocaust shows us the worst of human behavior when intolerance goes unchecked. “Part of the JCC’s mission is to dispel the myth of the other,” said Jonathan Lev, Executive Director of the Boulder JCC, “we were proud to host the exhibit and encourage the level of community discourse that this exhibit brought with it. We look forward to continuing to be a resource for the Boulder community for this type of education.”

Yahad-In Unum is dedicated to identifying and commemorating the sites of Jewish and Roma mass executions in Eastern Europe during WWII and educating about genocide prevention. Through their years of fieldwork, Yahad-In Unum has identified over 2,500 mass graves, 1,400 execution sites, and recorded over 6,100 testimonies of witnesses to these events. It is estimated that between 1.5 and 2.2 million Jews died in the Holocaust by Bullets, 1/3rd of the Jewish victims of the Holocaust. Founder and President of Yahad-In Unum, Father Patrick Desbois, has devoted his life to researching the Holocaust, fighting anti-Semitism, and furthering relations between Catholics and Jews. Father Desbois is the Braman Endowed Professor of the Practice of the Forensic Study of the Holocaust at Georgetown University, was awarded the Tom Lantos Human Rights Prize in 2017, and has been featured on CBS’ 60 Minutes. This past November, Father Desbois spoke to a crowd of 500 people at the Boulder JCC. The conversation was moderated by Scott Peppet, Professor of Law and Wolf-Getches Fellow at the University of Colorado Law School. For over 35% of attendees, this was the first time they came to an event at the Boulder JCC.

The community impact of this exhibit would not have been possible without the support of the 39 Community Outreach Partners, including the City of Boulder, the City’s Human Relations Commission, community organizations, and faith-based communities in the Boulder and Denver Metro Areas. “Residents of Boulder and neighboring communities were blessed by this opportunity to learn and remember the terrible events from the last century, strengthening our resolve to prevent anything like the Holocaust from ever happening again,” said Boulder City Council Member Bob Yates.

The Holocaust by Bullets exhibit was on display at the Boulder JCC from October 29 – December 14, 2018, free and open to the public with tours led by forty volunteer docents from the greater Boulder community including retired teachers, university professors, professional genealogists, and Holocaust survivors. There were also seven local therapists that volunteered their time and facilitated numerous group tour debriefs.

Among the volunteer docents was Barb Steinmetz, longtime Boulder resident and Holocaust survivor. “Understanding that these acts of cruelty were committed by ‘ordinary’ people like us forces us to examine our own behavior,” Barb shared. “What emerged was conversation that confirms we have the courage to make choices at critical times. By standing up with resolve, when we witness wrongdoings, we may change the world.”

The courage to stand up with resolve was particularly relevant for the students visiting the exhibit. Nearly 800 students ranging from 7th graders through university students came with their classes. “I was truly moved by the capacity of our 7th graders to take something so tender, so tough and so real into their hearts,” said Cheri Eymer, Language Arts Teacher at Southern Hills Middle School who coordinated the largest group tour (187 students). “They know they are the ones who will bring compassion to our history and positive change to our future.”

Students from Cheri Eymer’s class created artwork to integrate what they learned from visiting the exhibit. “For me, learning about the Holocaust was hard,” said one of Cheri Eymer’s 7th grade students. “It can be hard to hear about the suffering others had to endure. What happened to the Jews during the Holocaust was absolutely horrific, but by learning about what happened, we can prevent it happening now.”

Continuing our commitment to Holocaust education, the Boulder JCC is looking forward to hosting a presentation by Edna Friedberg, US Holocaust Memorial Museum Historian, titled Americans and the Holocaust: What did Coloradans Know? in May.

January 7 – April 4, the University of Nebraska at Omaha

A Presentation by Father Desbois, the Holocaust by Bullets Traveling Exhibit,

A Presentation by Father Desbois, the Holocaust by Bullets Traveling Exhibit,

Kai Murga-Canales is the Director of Marketing and Communications at the Boulder JCC. Originally from Miami, Kai moved to Boulder from Atlanta, where he worked for the Jewish Federation of Greater Atlanta and Limmud Atlanta + Southeast.
Previous A Food Justice Tu B’shevat Seder
Next Milk and Honey Farm Chefs Series Welcomes Vegan Fusion Chef Mark Reinfeld