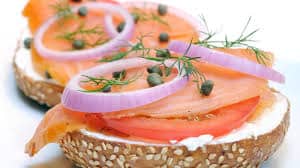 Nothing goes better with Torah Study than bagels, lox, and cream cheese. So if it is a Saturday morning around 9 a.m at Congregation Har HaShem in Boulder, you can find both, and some 30 to 40 interested souls, who are there to chew on it all.

“I used to work at a congregations that called it ‘BLT’ — Bagels, Lox and Torah, but then the recession hit and we changed the name to Bagels, Learning and Torah,” Rabbi Fred Greene, says with a chuckle. This one hour weekly study session with Rabbi Greene, which each week draws many familiar faces, and always a few new ones, could easily be called ‘BLLLT,’ Bagels, Lox, Learning, Laughter and Torah, because there’s plenty of everything.

There’s lots of reasons people show up around the long rectangular table (with additional seats lining the walls of the large, open room to accommodate everyone), but most would say it is for spiritual and intellectual sustenance…rather than the delicious carbs. People come for a deep dive into the weekly Parsha, and for a chance to ask questions, and share their thoughts. It’s a lively, participatory, learned, group. Each week, it seems like there are as many perspectives, laughs, and hands raised to ask a questions, as there are poppy seeds on a bagel.

These Torah Study sessions are open for all — to drop in once to check it out, or to become a regular. You don’t have to be able to read Hebrew, and you don’t have to do any preparation before hand…even though many people in the room do both. There is certainly varying levels of Jewish literacy among the group, but what is shared is the desire to listen, learn, while showing respect for other people’s opinions.

Ira, who has been coming to study Torah on and off for 8 years isn’t alone when he says, “Study in a group allows me to build connection with others, hear different viewpoints and feel the presence of G-d.”

Rabbi Greene, who came to Har HaShem in 2015 was committed to leading a weekly Torah Study followed by prayer minyan. “It’s meaningful when we get to see ourselves in Torah,” he says. “We get to see that it doesn’t have to be something foreign, abstract, something we are only told about. Torah Study helps us bring meaning into our lives and that’s why we are here.”

Each session starts with Rabbi Greene asking people to say hello and welcome to the people next to them, and then with a Blessing for studying Torah. It’s not unusual for a hand to shoot up immediately with a question about the blessing, or the meaning of the name of the Parsha. Sometimes before even one word of the text is read the room fills with comments and discussions and of course laughter. That’s how it goes….week after week.

One recent Saturday morning, when the group was starting over at the beginning of the Torah and looking at the text from the the very first Parshat, Bereshit, as always, the group had lots to say.

When Rabbi Greene offered the notion that Torah is a blue print for creating the world, someone chimed in that there is a Midrash (Jewish teaching) that says G-d studied Torah before creating the world. Others offered up interesting ideas like G-d speaks in multiple voices and that we can see sparks of Torah in those we disagree with.

You could tell how much Rabbi Greene appreciated the give and take because after each comment offered, he broke into his big smile and responded with an enthusiastic “Good question!” or “Nice!” or “Beautiful!” or “…love that!”

That morning, people were so eager to chime in to the discussion, that at 9:25 the Rabbi calls on three more people with raised hands, even though they had barely made any progress in the text. “Ok, so let’s have these three more comments and then I want to get back to reading because we have only gotten through the first 3 words so far….,” the Rabbi said trailing off.

“Is that a problem?” someone asks to no one in particular.

The room erupts in laughter, once again, because everyone knows that what they are doing in these mornings together is less about reaching a final destination or a completed Parsha, or a definitive answer. They are just all coming along, week after week, on a journey through the Torah, with a bunch of fellow travelers making frequent stops along the way for bits of Jewish wisdom, and bites on their bagel.