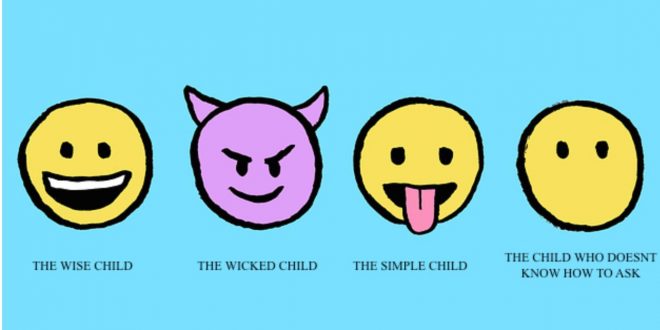 Any fan of midrash has got to love ‘The Four Children.’

This well-known section of the Passover Haggadah considers four types of children who might be sitting there at the Passover Seder: the wise one, the wicked one, the simple one, and the one who does not know how to ask. Each one forms a distinct personality archetype, and as we begin to tell the Passover story, we imagine each one asking a different kind of question, and each receiving his own unique answer. It is often celebrated as a record of the pedagogic wisdom of the rabbis, an early articulation of the principle of Personalized Learning.

It is also a masterpiece of midrashic technique, a careful collection of verse fragments from across the Torah, reordered and strung together to form a new narrative. The midrash brilliantly picks up on the fact that there are four separate instances in the Torah which make mention of the obligation to tell the Passover story – each one phrased slightly differently, which the rabbis take to mean that they indicate four different kinds of telling.

The Haggadah spells out exactly how all this is done, so we might as well just read the section through. The version we have is actually a synthesis of two appearances of this midrash, one found in the Mekhilta, and one in the Jerusalem Talmud. But let’s take the classic Haggadah text as our starting point, and we’ll interrupt along the way to explain things:

The Torah speaks referring to four children: One is wise, one is wicked, one is simple and one does not know how to ask.

The wise one, what does he say? “What are the testimonies, the rules and the laws which the Lord, our God, has commanded you?” (Deuteronomy 6:20)…

What a question! Look at how wordy and knowledgeable this kid is! So this is clearly the smart child. And what do we do? The midrash continues…

So you shall instruct him in the laws of Passover, up to ‘one is not to eat anything after the Passover-lamb.’

Okay, instruct him in the laws. Moving on…

Uh-oh. The rabbis are not going like the tone of that question. Especially that last part: What’s it ‘to you’?

He says ‘to you,’ but not to him! By excluding himself from the community he has denied that which is fundamental. You, therefore, blunt his teeth and say to him: “It is because of this that the Lord did for me when I left Egypt” (Exodus 13:8) ; ‘for me’ – but not for him! If he had been there, he would not have been redeemed!

Yikes. He wouldn’t even have made it out. That’s a strong statement. Then comes the simple child.

That’s it. That’s all he says. Just “what is this?” This child is confused by the whole ceremony. He really has no idea what’s going on. So the rabbis recommend starting from the beginning:

Thus you shall say to him: “With a strong hand the Lord took us out of Egypt, from the house of slaves.”(Exodus 13:14)

Okay – wise, wicked and simple. Three question, three answers. But then there’s one more child. A child without a question:

As for the one who does not know how to ask, you must open the topic for him, as it is said: “You shall tell your child on that day, ‘It is because of this that the Lord did for me when I left Egypt.’” (Exodus 13:8)

Now that last one is a little surprising. If the working assumption of the midrash is that each Passover question recorded in the Torah refers to a different child, and we find three different questions, why not just leave it at three children? Why read in a fourth, silent child?

ּBut there are several problems with that logic. First of all, we don’t need to create a silent child for the “You shall tell your child on that day” verse, because that particular verse has another function. It is from this very line that the rabbis derive the actual commandment to tell the story of Passover to our children. So this is the primary verse, from which we learn that we tell the story altogether. It’s the other storytelling verses that are extra – and so they can be used to describe how we tell the story.

But more perplexing still is the nature of this child. “The one who does not know how to ask”? That doesn’t seem like a classic personality archetype. A smart kid, sure, we know that type. A naughty kid – not unusual. And yes, some children are a little slow. But what does it mean that this child doesn’t know how to ask? If it were just a question of intelligence, we’d have already covered that with the simple child. No, there’s some other disconnect happening for this child.

As is so often the case, Rashi’s commentary on this verse hints obliquely at a deeper level of psychological insight into what might be going on. He says:

Here, “You shall tell your child,” speaks about the child who does not know how to ask. And the verse is teaching you that you should open for him with words of Aggadah, that draw forth the heart. (appears in Rashi’s comments on v. 5)

Open with “words of Aggadah.” The word Aggadah itself is significant here. For one thing, it is it the Aramaic cognate of the Hebrew, Haggadah, both of which mean telling – or, in this case, story-telling.

But more than that, Aggadah always stands, in rabbinic literature, opposite Halakhah – or, Law – as the other major area of traditional study. These are the two basic categories of rabbinic writing: Halakhah and Aggadah, Law and Narrative.

And yet (though it is never officially stated) it always seems that of the two, it is Law which takes the place of primacy. Law has historically been the major focus of Jewish study. The Talmud, the most famous rabbinic work, is primarily thought of as a legal text, though it contains plenty of narrative as well. Indeed, in many yeshivas, standard practice is to spend weeks carefully analyzing every line of halakhic  discussion in the Talmud… and then to quickly gloss through the aggadic sections. In the land of traditional Jewish learning, Law reigns supreme.

For an affirmation of this truth, we need look no further than our midrash here in the Haggadah. Who is the “wise child,” after all? It is the one who asks, “what are the testimonies, rules, and laws, which the Lord your God has commanded you”? This child is not just knowledgeable. The things she knows about are the laws. And so we answer her with a catalog of laws, detailing the Passover rituals, from beginning to end. The standard-bearer of Wisdom is Law.

And yet, something is wrong with this equation. For on Passover, of all times, the reason we are gathered together, is to tell a story. The very name of the book we read from is the Haggadah – literally, ‘The Storytelling.’ Rattling off a list of rules and regulations will not do. We are here to tell the story of the Exodus.

The Book of Exodus, after all, is itself an epic narrative. Yes, there are many laws in it; but those laws are embedded in a larger story, and they only find their meaning and their authority through their placement in that story. Who would follow the commandments of the Torah if they were presented abruptly, with no context? Who would be there to stand at Sinai if the Israelites had not been freed from Egypt? That is the whole point of the Book of Exodus: Revelation depends on Redemption. Law depends on Narrative.

The great twentieth-century legal philosopher, Robert Cover, in his essay Nomos and Narrative, puts it this way:

And the great twentieth-century Jewish philosopher, Abraham Joshua Heschel, expresses a similar sentiment, in the language of rabbinic discourse:

The wise child is asking for knowledge – for Halakhah. But there is another type of child who is seeking meaning. He does not know how to ask, because questions are the language of analysis and investigation. Instead he is listening. Listening for something that lies beyond the range of expression.

How will we know what to say to this silent child?  Rashi tells us. We will open with Aggadah, with story, because, Rashi says, words of Aggadah draw forth the heart. This is not the simple child. This child holds a complexity, there behind his silence. But he processes the world not with his mind, but with his heart. So we must learn to speak to the heart, to the emotions, to the intuitions.

We must learn to tell the story of the Exodus. This is the child who will teach us how.