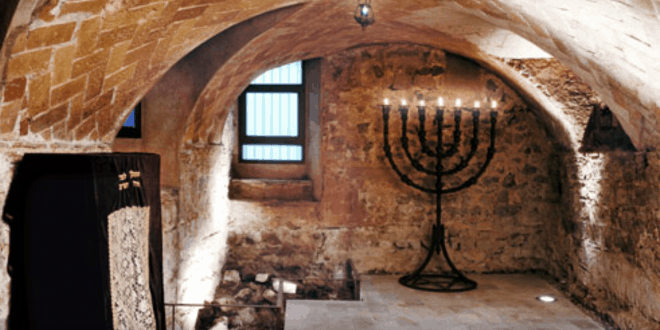 Staff May 30, 2018 Arts & Culture Comments Off on Old Synagogue Barcelona

Barcelona has one of the oldest synagogues in Europe.  It was recently rediscovered in 1987, and in the late 1990s restoration work began.  The synagogue is open to the public. Certain services such as bar mitzvah and bat mitzvah, along with weddings are held there.  A 30 minute briefing on the history of Jews in Catalonia from ancient times till now are given there. Regular services are not held in this synagogue, but are instead held in other synagogues in Barcelona.  The synagogue is in the Jewish quarter, which is in Barcelona’s gothic district. The gothic district is the medieval portion of Barcelona and has a number of very interesting sights of historical note.

Barcelona had a thriving Jewish community until the 1300s.  The bubonic plague then devastated Catalonia.  According to the tour guide, Jewish people had lower rates of mortality due to better sanitation and kosher practices, plus Jewish people had cats while Catholics at that time did not have cats.  Jews were accused of poisoning the wells, and the populace turned on Jews and launched pogroms. Jews were either forced to become Catholic (70%) or the remaining ones fled. Of course there were Crypto-Jews, but if any got discovered by the much later Spanish Inquisition they could be executed.

Over 100 years ago Jewish people began to return to Barcelona, and Spain for various reasons.  Primarily escaping persecution from other countries, and this slow return continued throughout World War II due to Spain’s neutrality.  Franco considered cooperating with the Nazis, but no formal alliance ever happened in part because Spain was devastated by the Spanish Civil War a few years earlier.  Spanish diplomats, on their own and at great personal risk worked hard to give Jews visas and to help save them from Nazi persecution.  The Nazis were defeated and Spain ultimately became a member of NATO and an US ally.  As Spain’s economy grew in recent decades, it attracted more Jews from Latin America, North Africa, and other parts of Europe and some of these people settled in Barcelona.  As of 2015, a new law grants the descendants of expelled Sephardim citizenship and this has brought more Jews to Barcelona.

The old synagogue serves as a welcoming point of sorts for Jews coming to Barcelona, regardless of whether they are tourists or coming to Barcelona to live.  Given the very strong history and cultural contributions Jews have made to Barcelona, Catalonia, and Spain itself it is definitely one of the first things Jews should see upon arriving to Barcelona.  Other cities in Spain and Portugal have had or are having their ancient synagogues restored and have built or are building new museums celebrating the Jewish heritage of the Iberian peninsula.

Justin Samuels was born in New York City.  His family home is in Alabama.  He graduated with a BA in History from Cornell University, and with a MA in English Education from Columbia University.  His film “Wine Tasting” was released on VOD last year.  “Wine Tasting” won best tourism film at the Finisterra Arrabida Film Festival in Portugal last year. Justin has worked as a freelance writer and a teacher.  He is currently in Barcelona, Spain.

They call me "NewsHound IV," because I'm a clever Finnegan, sniffing out stories all over the Boulder area. I love Jewish holidays because the food is GREAT, especially the brisket. Well all the food. I was a rescue pup and glad to be on the scent!
Previous Jaden Ortiz Bar Mitzvah
Next Marilyn Pinsker Finds Lost Family – And Finds Herself in a Film