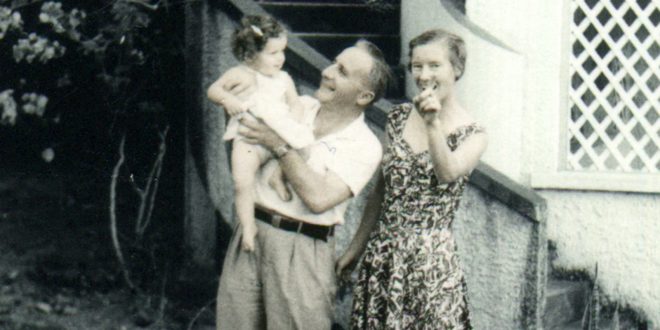 Marilyn Pinsker Finds Lost Family – And Finds Herself in a Film

Kathryn Bernheimer May 30, 2018 Arts & Culture Comments Off on Marilyn Pinsker Finds Lost Family – And Finds Herself in a Film The story behind “The Last Goldfish,” screening at the Boulder JCC at 4:00 and 7:00 pm on Sunday June 10, solved a family mystery for Marilyn Pinsker, who has lived in Boulder since the 1970s.

Marilyn grew up in New York in a second-generation family that had emigrated to America long before the horrors of the Holocaust. Marilyn knew, however, there were postcards from her grandfather’s brothers in Europe that had stopped coming in 1937.

“I always wondered what happened to them,” she remembers.

She found out five years ago when her cousin Joyce let her know that an Australian woman named Su Goldfish had contacted her, wondering if they might be long lost cousins. Su had accidentally discovered her father’s hidden Holocaust history and was searching for the family she didn’t know she had.

Marilyn and Su made contact, and in 2014 Su came to Boulder to meet Marilyn. She returns June 10 for a family reunion and two talkbacks at the free Boulder JCC screenings.

Su did not bring a film crew to Boulder in 2014, but did tell Marilyn that she was making a film about her discovery of a lost Jewish identity.

“We had an immediate connection,” Marilyn says of the encounter. “She showed me a rough cut and we sat in my basement and cried.”

Some of those postcards that stopped coming, it turned out, were to Marilyn’s grandfather from Su’s grandfather. His son Manfred, Su’s father, fled in 1939, suppressing the trauma by creating a new life with a new family in a new part of the world.

Su grew up in Trinidad, not knowing her father was Jewish – or even that she was white – and knew nothing about her father’s life before her idyllic childhood. In Australia, where Su moved as a teen, she embraced the lesbian community and forged her own identity, until a fateful discovery sent her on a dizzying journey.

Marilyn’s elderly father Carl, who had also changed his family name, was initially confused by the news that his  cousin had survived, and has not spoken much about it, although her mother Judy has been interested and curious.

“It’s been very insightful,” Marilyn says. “And a little sad. There’s been a lot of processing.”

Su finished the film last year, and it has been playing at festivals across the world.  Read more about the film at: https://www.thelastgoldfish.com

Marilyn says she is most excited to see Su again and meet her partner Deborah. But she also admits she is looking forward to the screening as a sort of emotional release.

Marilyn confides that she’s been attending the Governors Holocaust Remembrance Day with her husband Jerry, a long-time ADL volunteer, for 15 years. But after learning her family’s own personal history, she stood up among people who lost family in the Holocaust for the first time. It was chilling, she recalls.

“It’s changed me,” she says. “Just knowing this history has changed me.”

With Director Su Goldfish in person

At the Boulder JCC

Kathryn has spent her professional life writing about, teaching, and presenting the arts. Founding Director of the Boulder Jewish Film Festival, Kathryn was Director of Menorah and ACE at the Boulder JCC from 2003 through August, 2019. The former film and theater critic for the Boulder Daily Camera, Kathryn is the author of "The Fifty Greatest Jewish Movies" and "The Fifty Funniest Films of All Time." kathryn.bernheimer@gmail.com
Previous Old Synagogue Barcelona
Next Weekly Edition: June 1st, 2018