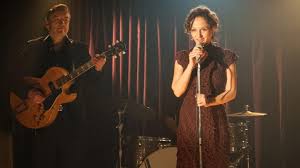 Morah Yehudis: Suicide, Hope and the Music of Life

Among the many moving films shown at the Boulder Jewish Film Festival, was a German movie called ‘To Life’ in English, or ‘Auf das Leiben’ in German. The heroine, an aging Holocaust survivor who has little left but dark memories, has tried to take her life by slitting her wrists in a bathtub. She is rescued by a young German man and they both experience a kind of resurrection from the hopelessness that had previously engulfed them.

In this film, with the encouragement and support of the German gentleman, the survivor begins to have memories of what brought her happiness- and survival- when she was younger. It was her own joy and her ability to bring joy to others through singing that eventually restored her will to live. One of my favorite fantasy movies, ‘August Rush,’ is about an orphan boy who hears and even sees music everywhere and is able to find and bring together his own parents who are both musically talented in their own ways. I believe that above and beyond her particular talent, music is a metaphor for finding meaning even in the most apparently hopeless circumstances.

When I was a teenager whose single mother was on welfare, I had a social worker who would visit me once a week. After a year or so, she had a stroke. I didn’t know what happened to her and against the wishes of both my mother and the welfare office, I went to visit her in the hospital and was devastated that she didn’t recognize me at all. As I try to recall any experience of during my time with her, the only memory that remains vivid to this day, a memory I continue to share with others, is the wonder I felt when she taught me how to blow a blade of grass in such a way as to produce beautiful, clear sounds. To me, the music that emerged from the blade of grass was like ‘a blaze of light in every word’ that could shine meaning on a dark, chaotic, world.

Later when I became interested in Hassidic stories, I was enamored with the one where Rabbi Shalom Dovber is taking a walk with his son, Yosef Yitzchak. The father reprimands him for mindlessly uprooting a blade of grass. He reminds him how the sages tell us that each blade of grass has an angel that tells it to grow, and has a unique purpose in creation. How much more significant is the life of each human being.

Finding purpose to life was Victor Frankl’s contribution to psychology, a realization that emerged from the horrors of the holocaust. And in a little known, fascinating back story, encouragement toward the search for meaning came from none other than the Lubavitcher Rebbe! In brief, the story goes like this: Frankl at some point in his life felt rather burnt out and dejected. The theory that he had developed in the concentration camps was that the people who were most likely to survive were those who were most optimistic and had a will for meaning, in contrast to the Nazis ‘will for power’. After the war, Frankl tried to promote his theories to apply to everyday life, but was ridiculed by the then more popular Freudian psychologists of his time.  One day he was filling out some papers to emigrate from Vienna to Australia where his sister lived. Suddenly another Holocaust survivor from Vienna came to his door. At first he was very brusque with her, but when she said she had a message from the Lubavitcher Rebbe, everything changed. The message was: “Remain strong! Continue your work with complete resolve. Don’t give up. Ultimately you will prevail.” Frankl then confided that he had been planning to abandon his efforts to fight on behalf of his philosophy, but now he would reconsider!

How many lives were uplifted or even saved through Frankl’s more positive psychology that raised people from depths of the helplessness and hopelessness that can, as statistics demonstrate, throw so many into such clutches of despair that they give up on life?  (Read the full story: “The Rebbe and Victor Frankl” on Chabad.org. )

The Torah equates taking one’s own life as being akin to murder. We are the custodians, not the owners, of our lives. Our role is like a gardener who tends the plant with such care and nourishment as to maximize the optimal quality of life as long as we can, even as we face the unique circumstances with which the Author provides us.

When the Israelites left Egypt, and were trapped at the sea, among the four groups that reacted, was a group that said, ‘Let us drown in the sea.’ The sages attribute various meanings to their declaration, both literal and figurative. They all share a view of anguish in the face of overwhelming life threatening situations.

There have been lately a tragic number of suicides here in Colorado. While of course there are innumerable and complex factors involved, and all the relevant signs need to be addressed by the appropriate venues, I suspect some degree of hopelessness is involved in most of them. Besides taking the obvious medical and professional steps in getting help, I would beg anyone reading this, whether the person suffering or the significant others, to be sensitive and attuned to signals of hope, to the music of optimism and a heart open to courageous faith in a better tomorrow. And above all, that Someone above all is both watching and caring. As Frankl so eloquently wrote of those in the camps: “Woe to him who saw no more sense in his life, no aim, no purpose, and therefore no point in carrying on. He was soon lost.”

In my youth, as a welfare child whose father died when I was ten, I went through periods of despair, and had thoughts of taking my life. I had fantasies in my teens of drowning in lakes during challenging experiences in summer camp, but I never acted upon them. Once in my twenties, when still in the grip of, to use Churchill’s image, ‘the black dog,’ I was driving to the library with some still unread books to return. I hit a traffic jam and in the snail’s pace, reached into the back seat and randomly pulled out a book from the stack that was there. Screaming silently to G-d to send me a sign as to why I should not give up on life, I opened a psychology book called ‘The Transparent Self’, by Sidney Jourard, and read something like this: “When a person contemplates taking his or her life, sometimes they are just trying to get rid of an outgrown part of themselves that needs to be shed like a snakeskin. Don’t let your whole being identify with that partial aspect.”

Besides feeling that I had indeed been heard and received a divine communication, I realized at that moment that, as an avid reader, I did not want to close the book of my life before the end, before I figured out where the ‘Author’ was taking me.

Pesach is the optimal time to look beneath the surface of things, for deeper meanings. We read or study the Song of Songs which Rabbi Akiva called the most holy book of Scripture. As the Sefat Emet explained, on Pesach we can more easily unearth the eternal meaning of life. Similarly on the seventh day, we recite the Song of the Sea, because we reflect on the deeper significance of the splitting of the sea: that which was formerly hidden, now becomes revealed to us.

Nowadays, we may think that we cannot see any sign of the Shechina, the Divine Presence, in a direct manner, but kabbalists tell us that to discover Hashgacha Pratit- specific Divine Providence in the everyday details of our lives, is indeed to experience the compassionate Face of G-d. Again to quote Victor Frankl, “Everything can be taken from a man but one thing: the last of the human freedoms – to choose one’s attitude in any given set of circumstances….”

On the upcoming festival of freedom, may we all be liberated from anything that prevents us from actualizing our own souls. As we sing our way in the seder from Kiddush to the song of One Goat, may we merit to hear the music of the Infinite singing back to us.

I have been teaching Torah and Chassidic writings for over forty years to students of all ages and backgrounds, both on the East Coast and the Midwest. I have been a director of several Jewish organizations in Santa Fe and Colorado. My articles and poetry on a wide variety of Jewish topics have been printed in many publications, and also are available online.
Previous Shabbat Nugget: Parashat Tazria
Next Camp Adventure Rabbi