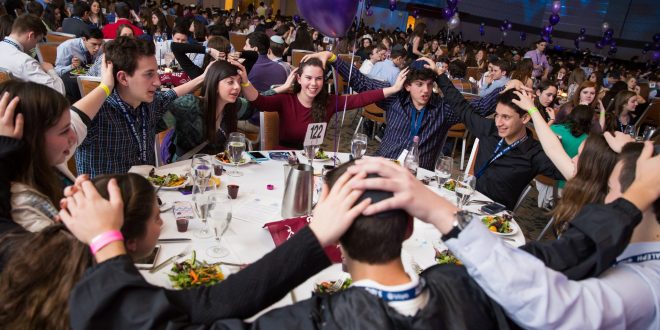 December 2-3, Worldwide – From the United States to the Balkans to Argentina and everywhere in between, more than 500 local BBYO chapters in hundreds of communities across 20 countries will take part in BBYO’s Global Shabbat 2016, an annual highlight in which Jewish teen leaders host simultaneous Friday night, Saturday morning and Havdalah services and/or accompanying programs, uniting as a movement in a truly international celebration of the joy of Shabbat. Throughout the weekend of December 2nd – 3rd, BBYO teens worldwide will celebrate this year’s theme, “Be a Gamechanger” by engaging a variety of influential ’gamechangers,’ including local officials, politicians, lay leaders, entrepreneurs, journalists, and Holocaust survivors, to participate in interactive Shabbat celebrations alongside their peers, families, and communities. ‘Gamechangers’ include both famous individuals and everyday all-stars who are positively impacting the lives of others through their actions and commitment to causes like civic engagement, social justice, human rights, poverty, inclusion and community betterment, among others.

Some of the ‘gamechangers’ joining teens and their families at this year’s Global Shabbat celebrations include: Glenn Greenberg, senior editor at Time Inc. and former writer for Marvel Entertainment; Larry King, American television and radio host and former CNN commentator; Mort Lightstone, Captain with the Royal Canadian Air Force; Estee Portnoy, Senior Vice President of Marketing for JUMP DC and business manager for NBA legend, Michael Jordan; and Harry Swimmer, a top-ten finalist for this year’s CNN Heroes and founder of Mitey Riders, a non-profit providing equine therapy to young people with disabilities.

“We’re incredibly excited about this opportunity to recognize the members in our community – from Holocaust survivors to entrepreneurs to musicians – who have made an indelible impact on the Jewish people and society,” said Aaron Cooper and Ellie Bodker, International Teen Presidents of BBYO. “On Global Shabbat, our aim is to create celebratory and open spaces so that all of these gamechangers can share their stories with us. As the last generation to have the opportunity to hear from Holocaust survivors firsthand, we’re especially thankful and committed to making the most of this gift so that we will never forget the atrocities of the Holocaust or the lessons of strength and perseverance of the Jewish people.”

Throughout the Global Shabbat experience, participating Holocaust survivors will have the opportunity to be inducted into BBYO as honorary members of the Aleph Zadik Aleph (AZA) and B’nai B’rith Girls (BBG), BBYO’s high school leadership fraternity and sorority, symbolically giving them the opportunity to relive their childhood stolen by the Nazis. Other featured ‘gamechangers’ and special guests will also be inducted into BBYO as honorary members, in recognition of the contributions they have made to their local community and to the world.

‘Be a Gamechanger’ was a theme first introduced in July 2016 at BBYO’s International Kallah summer program, where nine Holocaust survivors joined an international community of hundreds of Jewish teens in learning, singing and dancing. Throughout the weekend, the teens had the opportunity to hear the survivors’ stories and commit to share them with future generations. By the end of the weekend, the survivors were also inducted as honorary members of AZA and BBG. Global Shabbat celebrations around the world in December will serve as a continuation of this meaningful experience.

They call me "NewsHound IV," because I'm a clever Finnegan, sniffing out stories all over the Boulder area. I love Jewish holidays because the food is GREAT, especially the brisket. Well all the food. I was a rescue pup and glad to be on the scent!
Previous A Shabbat Nugget: Parashat Toldot
Next Sensational Season Ahead for ACE