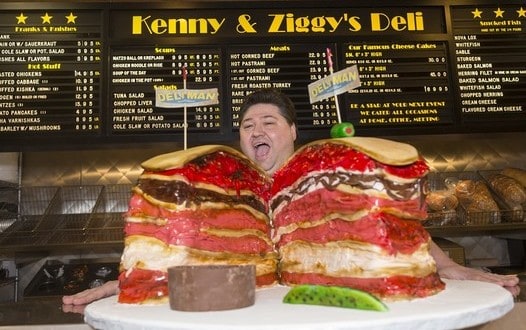 Kathryn Bernheimer February 25, 2016 Arts & Culture Comments Off on “Deli Man” Goes Kosher – With a Little Help From Grow and Behold Grow and Behold, known for its delicious kosher pastured meats, is partnering with Kehillat Orot Yisrael – Boulder’s Modern Orthodox congregation – to provide kosher deli sandwiches for the premiere of “Deli Man” at this year’s Boulder Jewish Film Festival. “Deli Man” is a movie about the individuals – one amazing character in particular – who are dedicated to maintaining the once-thriving traditional Jewish deli.  These dedicated deli men are preserving our cultural and culinary heritage, so in their honor the Film Festival is serving traditional kosher pastrami and corned beef as part of the festival’s Centerpiece event. (Don’t even think of asking for mayo.)

In true Boulder fashion, however, Grow and Behold reflects a distaste for typical mass-produced deli meat.  Rather, the naturally-cured (nitrate free) pastrami and corned beef from Grow and Behold are made from animals raised in pasture on family farms, with no hormones or antibiotics.  Grow and Behold Foods adheres to the strictest standards of kashrut (OU-Glatt), animal welfare, worker treatment, and sustainable agriculture. Their motto is “we do it right, so you can enjoy every bite.”  Boulder is home to more than 12,000 thousand Jews.  This  is an unusually high percentage compared to most cities across the USA. With the grand majority of its Jewish population being secular, Boulder does not have the critical mass to support a high quality, specialist local kosher butcher.  When Grow and Behold’s team learned about the screening of “Deli Man,” they felt strongly that Boulder’s Jewish community – and indeed all the participants at the event – should be able to sample fine kosher fare at the festive celebration of Jewish food.

“This is a movie about the kosher deli,” said Naftali Hanau, the founder and CEO of the five-year old Brooklyn-based company.  “You should have good kosher deli!  We love the idea of folks in Boulder getting to enjoy some really good quality meat together.  This is what the deli men were doing: bringing people together around food.  It’s in our heritage, just updated for the modern consumer who is also interested in the health and ethical aspects of eating as well.”

According to members of Orot Yisrael, the collaboration is inspiring.  “Boulder’s Jewish community is vibrant and collaborative but we don’t have the same access to the amenities and resources of larger Jewish communities in bigger cities,” says Mitten Lowe.  “To get this level of involvement from across the country to enable us to have a kosher event in Boulder shows just how important we all are to each other.”  As a great example of this cross-American connection, Grow and Behold has set up buying clubs in various cities across the nation to increase accessibility to healthful and ethically raised products.

“We have Buying Clubs in the cities you’d expect… Chicago, Boston… but also in the middle of Texas, and in Boulder and Denver as well,” said Hanau.  “We’ve found that the folks in the far-away places especially appreciate being able to get high quality kosher meat delivered affordably, especially when it’s just not available locally.  And we love knowing that there are people all over the country coming together over shared meals and enjoying these delicious kosher pastured meats.  Good food brings us together.”

The quality of the Boulder Jewish Film Festival is equal in excellence to that of the finest film festivals across the nation.  For this evening in question (Thursday, March 17 at 6:45pm) the festival organizers, along with Orot Yisrael and Grow and Behold, are ensuring the highest standard of kashrut so that no one will miss out – except perhaps Boulder’s non-meat eaters! For these vegetarians, a knish will be served as an alternative. The deli platter also will include coleslaw and a pickle, with the starring sandwich being served on Izzio Bakery’s kosher rye.

The deli dinner will be served at 6:45 pm in the lobby of the Dairy Arts Center prior to the film screening. Bobka will be served after the movie. Dr. Browns sodas round out the authentic experience.

The next Boulder Buying Club is on April 14, in time for Passover.  And yes, the corned beef and pastrami will be kosher for Passover!

Register for “Deli Man” and other films at: thedairy.org

To watch the trailer for “Deli Man,” CLICK HERE

Kathryn has spent her professional life writing about, teaching, and presenting the arts. Founding Director of the Boulder Jewish Film Festival, Kathryn was Director of Menorah and ACE at the Boulder JCC from 2003 through August, 2019. The former film and theater critic for the Boulder Daily Camera, Kathryn is the author of "The Fifty Greatest Jewish Movies" and "The Fifty Funniest Films of All Time." kathryn.bernheimer@gmail.com
Previous Boulder Focus Group on Firearm Use
Next Buy Tickets Now: 50+ Films at BIFF Next Weekend