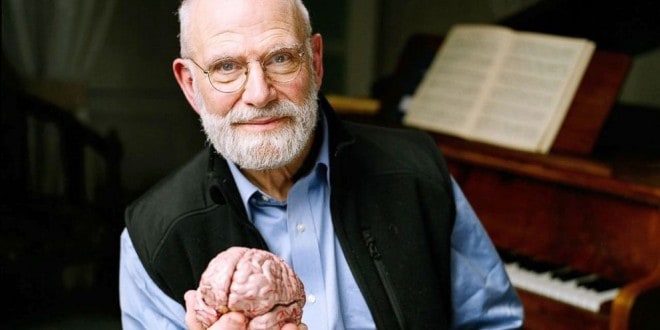 The Impact of Story

Morah Yehudis Fishman September 8, 2015 Guests and Blogs Comments Off on The Impact of Story

A few weeks ago I read the deeply moving final article by the brilliant Oliver Sacks- now Alav HaShalom=peace upon him- about the Sabbath. Several years ago I heard him speak in New Mexico, and was equally moved. I recall telling many people that I felt he did a great job of impersonating Robin Williams playing him in Awakenings- the only movie that stirred me to cry out loud, when Rilke’s poem Panther was recited. Dr. Sacks had the rare ability of combining scientific investigation with genuine empathy for the lives of people. As he was known throughout the week following his passing, he was the consummate ‘clinician of compassion.’  Like the music in Awakenings, he could take cold, hard facts, and create from them a portrait of a unique, living being.

What is the power of stories that engages us so much?

According to our sages, the first human, Adam, despairs of his destiny. He meets his own son, Cain, and is surprised that his sentence for killing his brother was commuted from death to wandering the earth. Cain tells the story that he pleaded with G-d and got a reduced penalty. Adam responded: ‘Such is the power of Teshuva, and I did not know it!’ Adam is so moved and relieved that he composes Psalm 92 in honor of the Sabbath, whose Hebrew word shares the same letters as Tashev- to return.  Rabbi Dov Ber Pinson comments that both Shabbat and Teshuva are ‘liberating agents that free us from the normal course of unfolding reality.’ In other words, both Shabbat and Teshuva can break the otherwise inexorable chains of acts and consequences.  And it all started with Cain’s recounting of his life to his father.

But Jews are supposed to confess only to G-d, not to others- right? Not necessarily.

Rebbe Nachman says something totally startling- and ostensibly un-Jewish: For confession to be effective, one should recite it in the presence of a Tzadik- a righteous person! Since elsewhere Rebbe Nachman talks about the potential Tzadik within every soul, it’s not so farfetched to be able to find a tzadik. However, the question of the need to confess before another human being remains.

Rabbi Itamar Eldar in Israel unpacks the significance of this confession. He says that the Tzadik is not meant to offer forgiveness in lieu of G-d. Rather, three important gains come from this telling. One’s life can be seen as a string of unrelated happenings and experiences. What forms the glue of these otherwise random events?- One’s need and ability to connect them into – a story. Just as many games and psychological techniques use Rorschach type cards and pictures to elicit tales from children or clients, and just as translations often say more about the translator than the words themselves, so too a recounting of past events create a system of links between information bits. The next part of the story is finding patterns or meaning in the linked events. The third part is the realization that there is an author or Author behind the now meaningful events.

Many of the Torah’s interpersonal conversations are about these kinds of communications- similar to the one between Adam and Cain: some examples, – when Yehuda ‘fesses up’ about his intimacy with Tamar, and the sons of Yacov admit their prior guilt to Yosef in Egypt. Yehuda in particular, whose name actually means thanks or admission, is blessed with the trait of leadership specifically for his courageous confession.

What is the connection between confession and leadership? I think it is the storytelling feature. As Rabbi Jonathan Sacks puts it in an article from last week’s parsha Ki Tavo, called ‘A nation of storytellers:’ The bringers of Bikkurim, the first fruits, had to recite a paragraph that encompassed all of Jewish history. Thereby the people became part of the story. As he sums up: ‘By making the Israelites a nation of storytellers, Moses helped turn them into a people bound by collective responsibility- to one another, to the past and future, and to G-d. By framing a narrative that successive generations would make their own and teach to their children, Moses turned Jews into a nation of leaders.’

This pattern of finding and connecting the threads of life and joining with a higher Author, could parallel the three steps of Teshuva themselves: admission, regret, and resolution. Admission is where we stand at any given moment. It is literally a very important step where we need to ground ourselves in the details and context of our lives- the present. Then we can look back at how we got here, and if need be, see other roads that could have led us to different locations. With that grounding in place, then we can see more clearly both how to change our map, and how not to get into the same predicament as before. As the famous quip attributed to Einstein, ‘Insanity is doing the same thing over and over and expecting different results.’

Therefore, after we have seen the linear pattern of this aspect of our lives,-what Rabbi Pinson called ‘the normal course of unfolding reality,’- and we have theoretically explored the other possibilities, we come to a different awareness: the awareness that there was a higher Power that was with us in our choices! At that moment, we are not only the authors of our lives; we become characters in a bigger story, guided by a meta-author! When we can recognize the third aspect, then Teshuva becomes possible. We can enter a kind of twelve step program, where we dialogue with the Divine, and say something like, ‘Ok, I may have chosen to get here, but if I believe you were and are with me, I will let you more consciously into my choices. Since you are the Creator, and I am created in Your Image, I too can recreate the direction of my life and my story.’

Often when someone acts mindlessly, and foolishly, there is either no story, part of a story, or a distorted story in the person’s mind. Telling the story- which is really what confession is about- puts the story in a broader, more sensible context than before. And telling the story to someone who is both wise and righteous, and can be both objective and subjective- refocuses the events in a more meaningful frame.

In the life of Oliver Sacks, I find it fascinating that his last written article- his Teshuva if you will- (and in Talmudic language Teshuva also refers to a rabbinic response) was all about his personal feelings about Shabbat. He writes that although he was not formally observant since the age of 18, his early childhood was steeped in Shabbat. Then later in his life he speaks with admiration about his famous cousin, the Nobel Prize winner, Robert Auman, and the latter’s firm and joyous commitment to Shabbat. Finally, Sacks ends the essay with the following words: ‘And now, weak, short of breath, my once firm muscles melted away by cancer….I find my thoughts drifting to the Sabbath, the day of rest, the seventh day of the week, and perhaps the seventh day of one’s life as well, when once can feel that one’s work is done, and one may, in good conscience, rest.’

There are many forms and expressions of Teshuva, and they all tell a story.  To me the above words are a beautiful example of a life that through his stories, research, and sense of wonder, had a powerful impact on the world around him, and was also steeped in the spirit of Judaism. As this Shmita, sabbatical seventh year comes to an end, it behooves us all to get in touch with the deep story of our personal lives, and to envision what a truly holy Shabbat would look like, for ourselves- and for the world. Shana Tova! May we all be written and sealed in the Book of Life.

I have been teaching Torah and Chassidic writings for over forty years to students of all ages and backgrounds, both on the East Coast and the Midwest. I have been a director of several Jewish organizations in Santa Fe and Colorado. My articles and poetry on a wide variety of Jewish topics have been printed in many publications, and also are available online.
Previous Week in Review: September 4th, 2015
Next Jewish Cultural Family School Moves to Boulder JCC