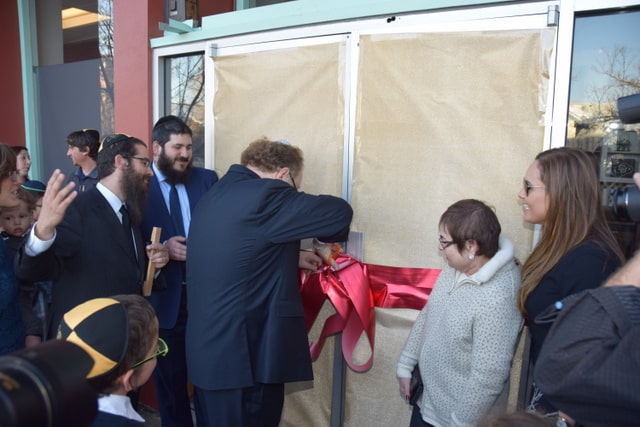 George Schaeffer cuts the ribbon opening the Center that carries his family's name.

With much joy and many speeches, Rabbi Yisroel and Leah Wilhelm, directors of the Rohr Chabad House at CU-Boulder, celebrated the grand opening of their seven-year dream, the Schaeffer Family Student Center on Sunday March 8th. The center, at 909 14th St., a few blocks west of the main CU campus, is four stories and includes two floors of rooms for resident students, a social hall with commercial kosher kitchen, a coffee bar/living room area, a worship space and library, which includes a full set of Talmud volumes.

On hand to cut the big red ribbon around the front doors was George Schaeffer, lead donor and father of Nicole Schaeffer, a 2008 graduate of CU and one of the inspirations for the project. George, Miriam, and Nicole were all honored at the opening ceremonies held under a Big Tent set up on the basketball court that is adjacent to and part of the Schaeffer Center.

In addition to the Schaeffers, several special guests joined the festivities. CU Chancellor Phil DiStefano offered official greetings from the University, Rabbi Yossi Gordon and Rabbi Mendel Kotlarsky representing Chabad on Campus International came in from Brooklyn, NY, alumni Daniel Deshe was on hand to hang the mezuzah on the Deshe Social Hall, among many other donors, parents, alumni, students, and community members.

Ariel Solomon, member of the 1990 CU Buffs National Championship Football team, donated memorabilia from that team to be displayed in the social hall, and was in attendance to see it in place.

Rabbi Wilhelm would like to be sure the community is aware of a few more giving opportunities that are still available at the Building Registry.

Here are our photo albums from the event:

I've been writing things since grammar school, and served as a writer, photographer and/or an editor on my junior high and high school newspapers; the Daily Trojan at USC (where I earned my journalism degree); the student newspaper at the Anderson School at UCLA (where I earned my MBA); and written and edited countless business documents and presentations in the ensuing twenty years. I've been involved Jewishly since my bris and in Boulder since 1995. I'm married to my Executive Director Cheryl, and we have two children, Lauren and Ethan.
Previous ADL Opposes Right-to-Discriminate Bills in Colorado Legislature
Next Har HaShem Provides Purim Baskets for JFS Clients