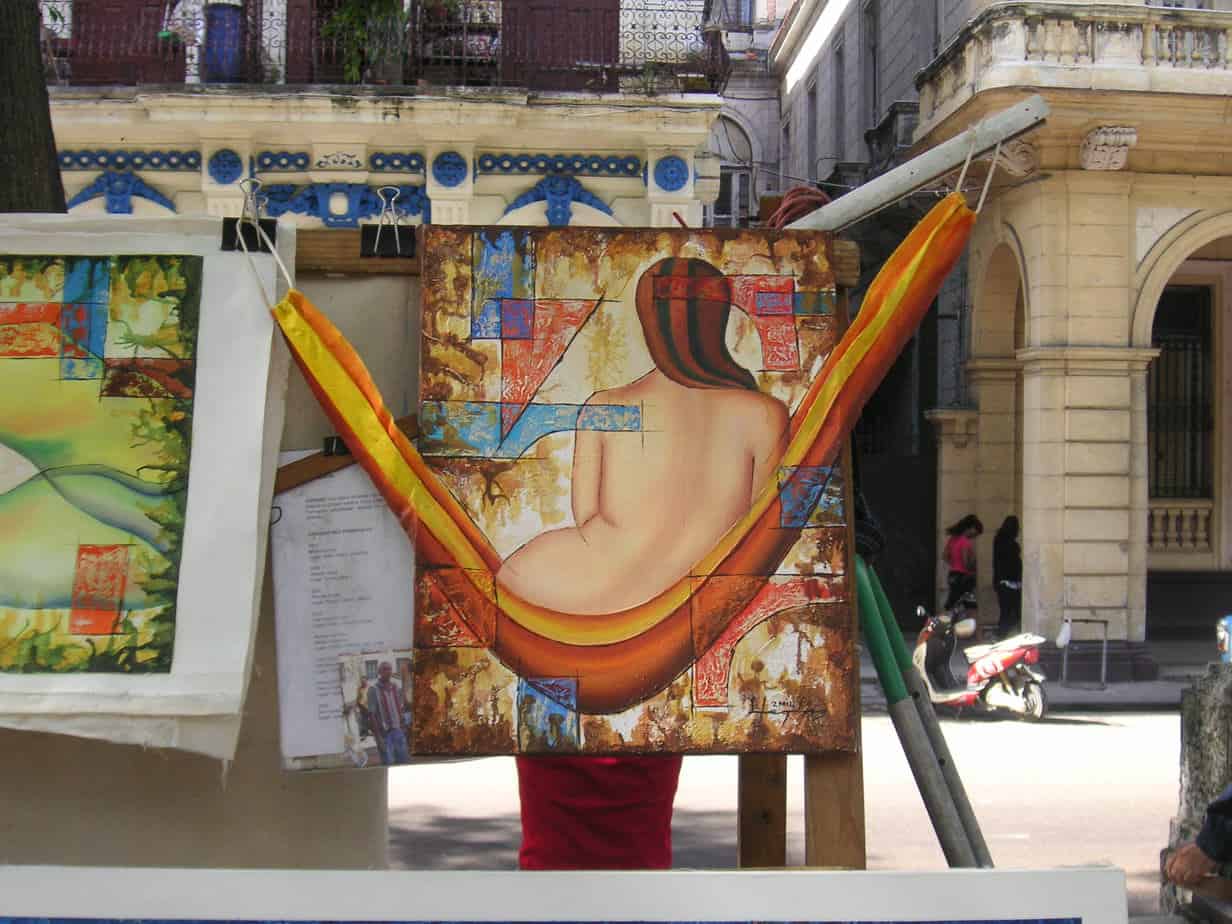 Art on the street in Havana

In 1959, when Castro came to power, there were 15,000 Jews in Cuba enjoying a comfortable life free of anti-Semitism. After Castro began confiscating private businesses and residences, a mass migration began, leaving only 1,500 Jews behind.

It is that remnant of a once-thriving Jewish community that today draws thousands of American Jews to Cuba travelling on group missions under a special religious license.

Menorah’s recent Jewish mission, the Boulder JCC’s first group trip, was designed with several goals in mind. The first was to visit the remaining synagogues and bring aid and gifts to their members, who are impoverished along with the vast majority of Cuban citizens. The second goal was to gain a deep understanding of the long, rich and complex history of Jewish life in this tropical island.

Because Menorah is a cultural arts organization, the trip also included visits to art museums, galleries and two huge city art installations: a dance rehearsal by a new “independent” modern dance ensemble; and the opportunity to savor the ubiquitous Cuban music that fills the streets.

Along the way, we learned about Cuban history and politics, and visited iconic institutions such as the Museum of the Revolution and Hemingway’s lavish estate. We even rode in vintage convertibles, such as the spiffy if bouncy turquoise and white 1949 Chevy my husband and I shared with Joe and Judy Kurtz.

When it came to smoking the fabled Cuban cigars – which can be purchased and consumed in Cuba but cannot be taken out of the country – we were on our own.

Everything else was arranged by our fantastic trip leader, Miriam Levinson, who was born in Cuba and moved with her family to Chicago at the age of 13. Almost 40 years later, she began re-connecting with her Jewish Cuban roots and opened a travel agency through the Chicago JCC. She has since led well over 100 Jewish missions, sharing her infectious love and intimate understanding of Jewish Cuba.

Our Cuban guide, Vicky, spoke near-perfect English and relished sharing both her vast knowledge of Cuban history and her insight into Cuban culture. She spoke openly, albeit carefully, about her thoughts concerning Cuba’s past and future.

Although 28 people signed up for the trip, personal or family health issues prevented 5 from travelling. But all 23 friends of the Boulder JCC who spent a week in Havana – with one overnight trip to Cienfuegos and Santa Clara – were enthusiastic travellers who enjoyed each other’s company. At some time or another, everyone expressed their fascination with Cuba and marveled at Miriam’s warmth, knowledge and organization.

I have invited all the participants to submit a description of their personal highlights, which will be posted in the Boulder Jewish News as an ongoing series, “Memories of Cuba.”

It will no doubt be tough to choose from the varied adventures. For some, it may be the trip to the Graphic Arts Workshop, where numerous purchases were made. (You are allowed to bring back art, books and music, but not rum, cigars or fruits.) Or it might be the Cuban fine arts museum, which boasts an enormous collection reflecting the historic vitality of the visual arts in Cuba.

The vibrancy and expressiveness of the dance rehearsal by MalPaso also had an impact on the group. In the Q & A after the performance of a new work that will premiere in Havana in March before its North American debut at the Joyce Theater in New York in May, the dancers were asked what it meant to them as artists to be in a group that is independent of the government, which has only recently relaxed its control of the arts. Their enthusiastic response to being free to take ownership of their own work made it clear that change is coming to Cuba.

Many among our group were touched by the visits to five synagogues, where we heard inspiring stories about how these congregations have struggled to survive. Some, such as the Conservative synagogue in Havana, known as the Patranato, are actually thriving. Young people here are embracing their heritage after a 30-year “silence,” a time during which all religion was suppressed. The fall of the Soviet Union in 1994, which threw an already poor country into a brutal financial crisis, also relaxed the prohibitions against religious practice.

While the small Orthodox synagogue is entirely made up of seniors, the Patronato has many young families. The night we attended Shabbat services, the beautiful sanctuary was full to overflowing, in part due to the unusually large number of Jewish groups that converged in Havana in mid-January. The Jewish Museum of New York had a group trip, and there were two from New Jersey alone, as well as a half dozen from around the country, most staying at the same once-luxurious and still very lovely hotel in Havana.

There is no doubt that the Jewish community in Cuba is faring somewhat better than the rest of the population due to the generosity of the American Jewish community. Our trip alone brought several suitcases filled with goods requested by the communities.

Another example of American largesse was recounted by Andrea Dworkin, president of the Patronato. One day a man wearing an old t-shirt visited the synagogue. He asked her what she most needed. She told him that Cuba had been invited for the first time to participate in the Macabbee Games in Israel and they needed equipment and uniforms but that it cost a lot of money. He told her he would cover the expenses. She asked him how come a man in an old t-shirt had so much money. “What name is on the t-shirt?” he asked.

“The Giants,” she replied.” “I own the Giants,” Steve Tisch said with a smile. The Cuban team of 54 came home with several medals.

Dworkin also recounted how she persuaded Raul Castro to come to their Chanukah celebration by telling him the holiday commemorated a Jewish “revolution,” an idea that found immediate favor with the Cuban president, whose relaxation of restrictions allowed Cuban athletes to travel to Israel despite the fact that the two countries do not have diplomatic relations.

Interestingly, although Cuba is far from a Zionist nation, Cubans have never been anti-Semitic. Santeria and Catholicism are the dominant religions, but Jews have been an active and accepted part of Cuban society since Columbus discovered Cuba – and sent a Jewish shipmate ahead to explore the island.

The last big wave of Jewish immigration took place before and during the Holocaust, when Jews seeking asylum found safe haven in Cuba. My grandparents were among those who fled Nazi Germany and sat out the war in relative comfort in Cuba. While my parents came to the US, my grandparents were denied entry since they had a son with Down’s Syndrome and America did not accept anyone with a disability.

My grandfather died at the age of 81 in Havana in 1956, and I was able to find his grave in the Jewish cemetery.  We paid them to clean and maintain the grave. The sense of closure that this brought, as we all said Kaddish at his grave, was a powerful personal highlight.

I was also able to find the address where my grandparents and my aunt and uncle lived, and took pictures of the dilapidated apartment building on the once elegant Avenue of the Presidents.

But I am sure I speak for everyone on the trip that the all-embracing highlight was the warmth of the Cuban people. We were free to talk to anyone, and to wander the city in our free time. Everyone we encountered displayed the trademark Cuban hospitality. Most Cubans have relatives in the US and love Americans. It was a pleasure to feel that love, and give a little bit back.

Kathryn has spent her professional life writing about, teaching, and presenting the arts. Founding Director of the Boulder Jewish Film Festival, Kathryn was Director of Menorah and ACE at the Boulder JCC from 2003 through August, 2019. The former film and theater critic for the Boulder Daily Camera, Kathryn is the author of "The Fifty Greatest Jewish Movies" and "The Fifty Funniest Films of All Time." kathryn.bernheimer@gmail.com
Previous A Successful ‘Day of Service’ at Bonai Shalom
Next CBS’ Next First Friday Features Nigel Savage