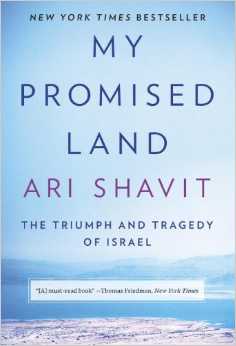 On Tuesday, May 6th, at 6pm, Bonai Shalom will host a new book club! Please feel welcome to join the discussion even if you haven’t read the book. There will be a discussion of My Promised Land by Ari Shavit, a moving and provocative book on the the history of modern Israel.

“Ari Shavit’s new book…is a gale of conversation, of feeling, of foreboding, of ratiocination. It takes a wide-angle and often personal view of Israel’s past and present, and frequently reads like a love story and a thriller at once. That it ultimately becomes a book of lamentation, a moral cri de coeur and a ghost story tightens its hold on your imagination…This book’s middle 200 pages are almost certainly the most powerful pages of nonfiction I’ve read this year. It’s not just that Mr. Shavit lays out the story of Israel’s founding with clarity and precision…It’s that he so deliberately scrutinizes the denial he locates at the heart of Israeli consciousness. ” Dwight Garner, The New York Times

“Measured by word volume alone, Shavit’s book tilts more towards the glorious side of Zionism’s ledger than to its supposedly darker side. There are four or five extremely moving chapters depicting the Zionist revolution’s “miraculous” accomplishments: reclaiming and cultivating the land, rescuing a people devastated by the shadows of the Holocaust, building a robust entrepreneurial economy and creating an artistic and cultural renaissance. And all of these “wonders” took place even while the people of Israel remained under constant military threat to their national survival.” Sol Stern, The Daily Beast (Except found here.)

Right after Yom Haatzmut, join Rabbi Marc in his house for falafel and an honest discussion about this important book.  Discussions will be held in Rabbi Marc’s newly renovated basement. Please let us know if you are interested in coming so we can make sure there is enough food to go around at 303-442-6605 or email Bonai Shalom at office@bonaishalom.org.

Previous “Walking with the Enemy” Powerful Holocaust Film
Next Classmates: Israelis and Palestinians Learning Together